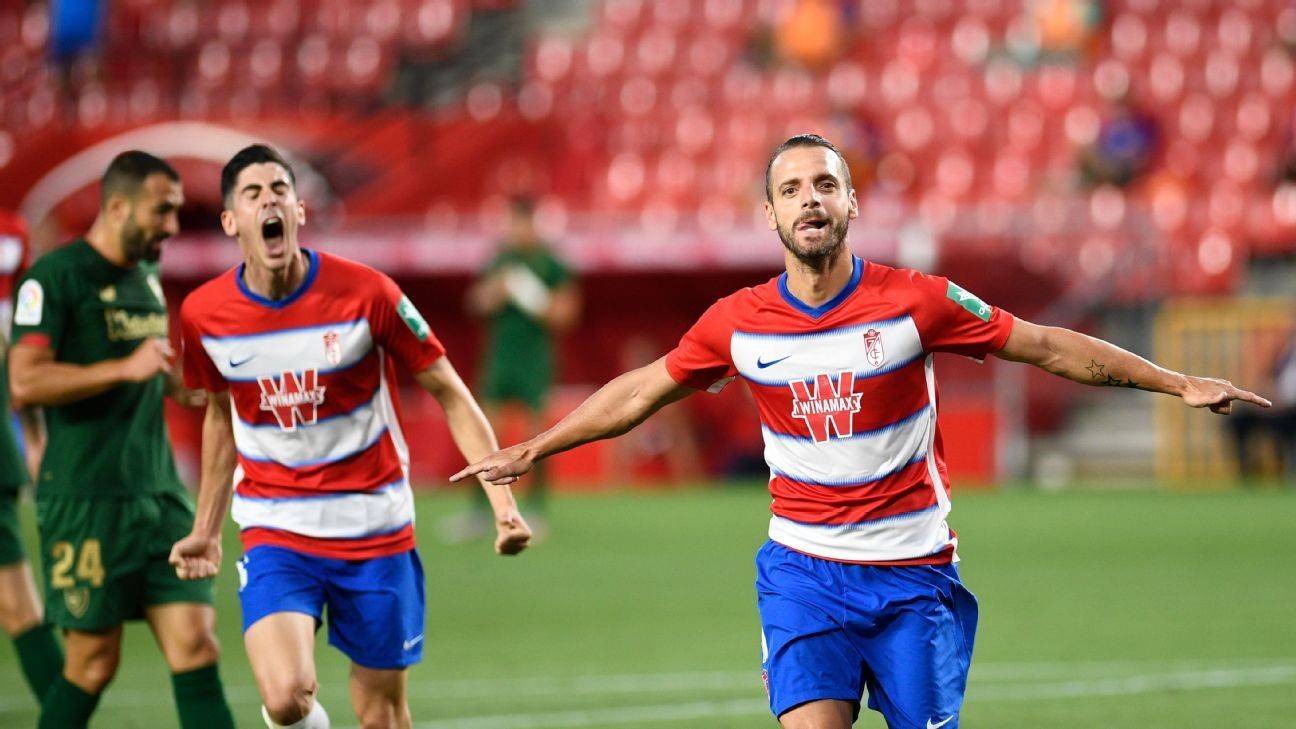 Roberto Soldado, right, celebrates the big Granada win on the final day of the season that ensured they would play in the Europa League. Carlos Gil/SOPA Images/LightRocket via Getty Images

It was grey and it was wet -- so grey and so wet you could barely see a few metres ahead of your face -- and through the sheets of pouring rain, Roberto Soldado appeared, mud splattered across the grin that engulfed his face. Aged 34, a former Spain international who had been in England and Turkey, he could have been in Qatar or somewhere; instead here he was in Granada, walking off the pitch on a grim day followed by his teammates, boots squelching on the sodden turf. Drenched but smiling, they had spent 90 minutes sliding about like a bunch of kids having the time of their lives.

Soldado had paid his dues and done his time. He didn't need this, but he wanted it and so did the rest of them. "You come in every day and you play sport with your friends," he said. "There is no better profession: I drop the kids off at school in the morning, then come here to play football, to have a good time. It's the perfect job."

Champions League 2019-20: 11 things you already forgot happenedSerie A was most fun and Premier League teams don't use subs: Stats of 2019-20 European seasonAtalanta's magic season ended against PSG, but their story's far from over

It was December and the day wasn't kind, wind howling through, but none of them cared. They were having too much fun for that and out on the pitch, it showed. Granada, newly promoted to the first division, had beaten Barcelona in week five and five weeks after that they briefly were top of La Liga for the first time in over half a century.

They were a revelation, the stand-out team at the time. Yet there was room for a little reality. They'd gone top partly because Madrid and Barcelona hadn't played, the clásico postponed, and then they lost four of their next five games and drew the other. And that, they said at the training ground that morning, was a good thing. A reminder of who they really were: the team that should get relegated, the team with the third smallest budget in the entire division and a salary limit 18 smaller than Barcelona's. The team that had gone top with a starting XI costing €6.1 million, and with only one man who had played in primera the previous season.

"We have had a great start that none of us could have imagined, even reaching top spot in the table," Soldado said earlier in the season. "But the important thing is how we all feel about the way we are playing and having 20 points already -- that's halfway to staying up. But we know there is a long way to go and we know we have to keep pushing ourselves to make sure we survive. That's the dream we all have."

Six months later, that dream has been replaced by something far wilder. "I don't think we're even conscious of what we have done yet," coach Diego Martínez said.

What they had done was this: on the final day of the season, to the sound of swallows and bats swooping over an empty stadium, the sun setting on one side of the stadium and in front of just two reporters from the written press, Granada had beaten Athletic Club Bilbao 4-0 -- "4-0, eh," Martínez noted -- to finish seventh. In doing so, they qualified for European football -- they will compete in the Europa League, entering in the second qualifying round, tentatively scheduled for Sept. 17 -- for the first time in their entire history.

All season, Martínez kept insisting that he wasn't looking at the table, but now on the final day at last he could. And it looked good.

"How can a local small business compete with Apple or Amancio Ortega [owner of Zara]?" Martínez said, drawing a parallel for life in Spain's Primera Division, but that's what his team did. When Granada played Sevilla in the second game of the season, they lost, sure, but he rightly insisted they had "looked them in the eye." The polls all said they would go down -- only Valladolid and Mallorca are smaller -- and yet, only six teams finished ahead of them. Not only that, but they reached the Copa del Rey semifinal too, knocked out by a late goal from Yuri, the fullback at the same Athletic side they had just hammered to finish their league campaign.

Granada coach Diego Martinez, right, has built an incredibly strong team spirit and a sense of fearlessness against bigger opponents that pushed them to a seventh-place finish in their return to the Primera Division. Fermin Rodriguez/Quality Sport Images/Getty Images

Granada's budget is €60m, with €35m dedicated to the first team salaries and signings. In the summer, they spent just €8.5m on new players, loan deals forming an important part of the team they constructed. Some of them will already be back at their parent clubs; some of their contracted players have overachieved so much that they may leave too. The men who arrived include Domingos Duarte, Yangel Herrera and Soldado. The last of them is 34, but at the end of July he renewed his contract for another year, still so full of energy, a leader with a lot to give. Far from giving up or taking it easy, as much as his football experience, it was his fight that attracted Granada to him. "I'd go to the end of the world with him," says strike partner Carlos Fernández.

They would all go there together, led by the manager.

Martínez is just four years older than Soldado, making him the youngest manager in the first division. That December day he renewed his contract, leaving the training ground and making his way to the stadium for the announcement carrying a suit in a bag. When he was a kid, he wanted to be a player, of course, but, he said, "the ball didn't pay any attention." He started coaching at 20 when he gave up playing, having reached the third division as a fullback. Sevilla sporting director Monchi soon saw something special and took him to Sevilla, where he coached the C team, the U19s and the B team, whom he took up to the second division. As Unai Emery's assistant in the first team, he was a UEFA Cup winner.

Asked in an interview once what the last film he watched was, Martínez laughed and replied: "Atlético vs. Juventus." He says that if does watch a film or something on TV, footballing solutions have a habit of appearing before him. The game dominates. How could it not?

His team is his, even though he never says so. It is also realistic, he says: "[we are] not a 10 out of 10 in anything, but efficient, mentally strong and able to do everything." In words he borrowed from a coach at Sevilla, he said: "if I have lemons, I'll make lemonade; if I have oranges, I'll make orange juice." His team is "chameleonic," a group of players who at the start of the season he said would work like "ants." They took him at his word: after beating Athletic Club, he said they had "no fuel left at all," spent but satisfied.

Nicknamed "the Shaman" by Rafael Lamelas, head of football at the Granada paper El Ideal, Martínez is fascinated by the mental side of the game and the psychology of it all, scribbling messages on the board in the dressing room. On the final day it read: "above us, only sky." By the end of it, they felt about right, too, doing a lap of honour even though there was no one there given the coronavirus-enforced empty stadiums, imagining their fans applauding instead.

"We felt them close, even though they weren't there," he said. "They can be proud of the red and white shirt."

He can say that again.

"Maybe there are values or virtues that are less glamorous in football and in life, that are not so recognised by society, but they're very important: persistence, commitment, belief, unity, resistance to adversity. They're very important, and even more so in these moments we're living through," he said after the season. "And his team has shown that. I think that has helped the fans identify with them. Only time will truly tell what this team has done. Working together, you can achieve the unthinkable."

It was about then that Martínez told a story to help explain how they had done it. It was, he began, the night he and his team were on their way back from the game against Real Sociedad in San Sebastián. It was late, and the players were due in for training early the next morning, when he got a call from the ground staff. They were just calling, he said, to tell him not to worry, that they had just finished painting the metal "players" white -- the colours of Real Madrid, Granada's next opponents. "Now that," Martínez said, "is a team."

By the time the players arrived the next morning, everything was ready for another game of football among a group of friends chasing a first-ever European place for their club, the secret to their success in those smiles. "I go to training every day happy," Carlos Fernández said, "and I see that same happiness in my teammates' faces."