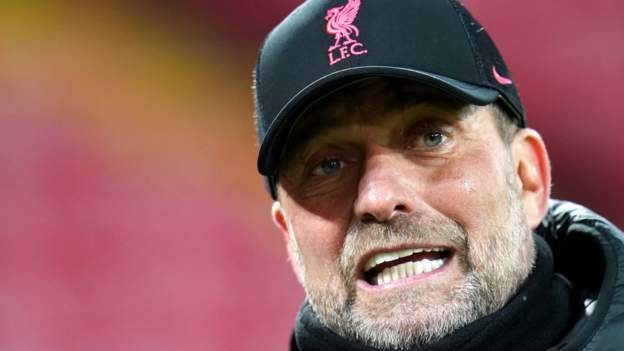 With Manchester City's brilliance and the way they are so relentless and clinical when it comes to winning games, it looks like Liverpool are climbing Everest with their title bid this season.

It's worth remembering they have done it before, though. Right now, catching City looks extremely unlikely but then Jurgen Klopp's side have already beaten the odds to triumph a few times in recent years.

So, although it is going to take an absolutely unbelievable effort for them to stop City retaining their Premier League crown from here, there are a few reasons I would not write the Reds off yet.

Firstly, we know this Liverpool team can go on the kind of long winning run they need now. They did it in 2018-19 when they took City to the last day of the season, then did it again to win the title in 2019-20, when everyone thought their opportunity had gone.

The fact they have been the only side in recent years to finish above City, or even go toe-to-toe with them, also means there will be a belief in their squad that they still have a chance.

There has been a resilience about Liverpool under Klopp for a few years now - they have got the trophies to prove it - so their players will think that way, even if no-one else does. They won't be giving up yet.

Manchester City's win over Chelsea on Saturday was their 12th league victory in a row. Liverpool moved into second place by beating Brentford on Sunday.A surprise to see Chelsea's challenge ended early

We all know the way City are playing is just scary and, percentage-wise, there is only a small chance that they will open the door wide enough for anyone to catch them.

Whoever you support, when you watch Pep Guardiola's side you just have to admire the quality of their play, and their strength in depth means their levels very rarely drop. They are one of the best teams we have ever seen in the Premier League, that's for sure.

They've already effectively knocked Chelsea out of contention after beating them on Saturday. I never thought Thomas Tuchel's side would fall away so quickly because they were so tough to play against, especially defensively, in the first couple of months of the campaign.

It just shows you that, no matter how strong a squad you have got, if you lose or even draw a couple of games and have a couple of key players absent, you can lose confidence and the momentum shifts.

Yes, Chelsea have had a few injuries and problems with Covid-19 in their squad but I was still surprised that the wheels came off their title bid the way they did - a month ago, we were still talking about a three-horse race and no-one expected the table to look like it does now.

On 16 December, Liverpool beat Newcastle to move within a point of leaders Manchester City, who had only hit top spot for the first time this season a few days earlier, on 4 DecemberNo Salah or Mane, but no problem this time

It feels like it is one down and one to go for City in terms of seeing off their rivals and securing their sixth title in 11 seasons, but there is still a lot to play for before Liverpool's challenge is over too.

If the Reds can stay on City's tail for a little while longer, then their game at Etihad Stadium at the start of April could become huge. For that to happen, though, there really is no room for error anymore.

Every game feels like it is a must-win for Klopp now and the pressure is on, which was why I was impressed by the way they saw off Brentford on Sunday.

It was a case of getting the job done without Mohamed Salah and Sadio Mane and they did that as well as could be expected. Liverpool played with a nice intensity and I felt Curtis Jones and Alex Oxlade-Chamberlain were both good selections.

Those two gave the side a bit more spark, with their pace, creativity and forward thinking. They were both really positive, which is exactly what Liverpool needed.

I thought it was an excellent display from all of the front three, especially considering all the talk about the two star players who were away at the Africa Cup of Nations.

With Diogo Jota, Roberto Firmino and Oxlade-Chamberlain, there was lots of energy and rotation between their positions and they certainly didn't look like an attack struggling for ideas.

Follow live reaction to Liverpool's win, plus the rest of Sunday's Premier League actionGo straight to the best Liverpool content

What I liked about Oxlade-Chamberlain was his willingness to run in behind Brentford's defence, which is something Mane and Salah always do so well.

There were several occasions when he made that kind of run and if you do that when Trent Alexander-Arnold or Andy Robertson have got the ball at their feet, they are going to find you - as we saw with Liverpool's second goal.

Bringing him in for Takumi Minamino was the only change Klopp made to his attack following Thursday's disappointing 0-0 draw in the first leg of their Carabao Cup semi-final with Arsenal, but it worked.

It was a very different game against the Gunners, who had 10 men and mostly stayed behind the ball, but there was a lot more penetration visible on Sunday. Liverpool just looked a lot more dangerous all-round.

For me, Jones played a big part in that. He should also keep his place because he brings more creativity from the midfield areas to go with the threat down the wings from Alexander-Arnold and Robertson.

Jones was always looking forward whenever he got the ball against Brentford, and when he ended up in a left-wing or inside-left position it allowed whoever was on that left side to free themselves and move more centrally to help Firmino.

Liverpool looked fluid, which bodes well for the next few weeks, however long Salah and Mane are absent for.