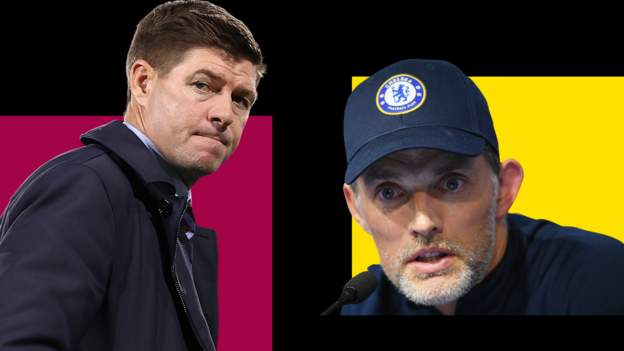 "It seems every day a manager loses his job or their job is under threat. I think stability and patience seems to be running out."

Leicester manager Brendan Rodgers, who has been under pressure for most of the season, probably spoke on behalf of all Premier League managers on Thursday after Aston Villa's Steven Gerrard became the fourth boss to be sacked this season.

Scott Parker was the first out of the door at Bournemouth back in August, followed by Thomas Tuchel at Chelsea and Bruno Lage at Wolves.

What's the average tenure for a Premier League boss?During the 2019-20 and 2020-21 season, a large portion of games were played behind closed doors because of the coronavirus pandemic

As well as the four sackings so far, Rodgers, Leeds boss Jesse Marsch and Southampton's Ralph Hasenhuttl have all been the subject of sacking speculation at some point this season.

The average tenure currently stands at two years and four days, but back in 2012, managers tended to last for nearly four years.

The Premier League's two most successful teams in recent years, Manchester City and Liverpool, top the chart for having the longest-serving current manager in the English top flight.

Liverpool boss Jurgen Klopp and Manchester City's Pep Guardiola have a combined tenure of 13 years and 125 days. If it wasn't for their longevity, the average time of a Premier League manager would be lowered to one year and 169 days.

It is also worth noting that Graham Potter had been in a job at Brighton for three years before he swapped the south coast for London, stepping in to fill Tuchel's empty shoes at Chelsea.

While the average time for a manager to stay in a Premier League job seems low at two years and four days, the number is reduced again when looking further at the English football pyramid.

Across the 91 league clubs, with Villa excluded, the average tenure is one year and 172 days - another mark Gerrard failed to make with Villa.

Rodgers said he was "bitterly disappointed" for Gerrard, who was Liverpool's captain during the Leicester manager's three years in charge at Anfield.

"He did a fantastic job at Rangers and the ambitions at Villa, I assume, are to be challenging for Europe," Rodgers said.

"I'm clearly aware if you are not doing so well, you are going to have critics but the key thing is to get a laser focus on what you can control. When you do that, everything else really is noise."

Liverpool boss Klopp said: "I am very sure Steven Gerrard will come back from that. We had a little exchange this morning, nothing too deep. I can imagine that it is disappointing for him because of the ambitions he had and the things he wanted to achieve with Aston Villa.

"We all get knocks; it is about how you respond. He will come back from that, no doubt. A lot of great managers out there had to leave their previous clubs for different reasons.

Newcastle manager Eddie Howe said: "I think he is a very good manager and I think it shows the short-term nature of everyone's thinking and reactions.

"We are in a very difficult job and a very volatile job at times, with a lot of short-term opinions and reactions."

Southampton boss Ralph Hasenhuttl added: "It's a pity when a manager loses his job but when a club [owner] thinks he has to do it for a better situation then they should sack him, like they did with Dean Smith, which didn't work too well."

Patrick Vieira, manager of Crystal Palace, said: "We are in an industry where we say that the long-term in our job is the next five games.

"This is the business we are in. It's really ruthless, it's really tough."

Everton's Frank Lampard, who played alongside Gerrard with England, said he knows from his experience at Chelsea how difficult it can be to be sacked in the public eye.

"I've huge respect for him as a player, person, coach and manager - it's not nice for someone to lose their job," Lampard said.

Chelsea boss Potter added: "It's part of the job. We know it can happen, but it's not nice when a colleague loses his job."