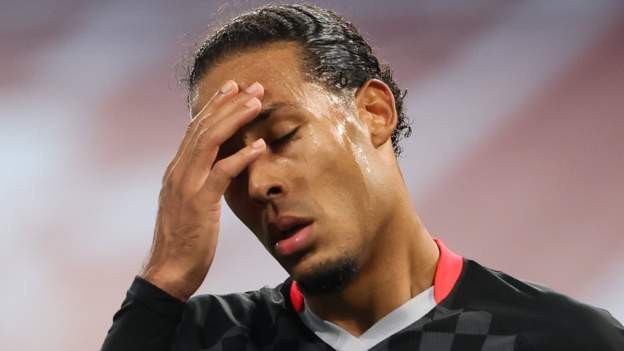 Virgil van Dijk has transformed Liverpool's defensive record in almost three years since his arrival - so how much will his absence hurt them?

Liverpool paid £75m, then a world record fee for a defender, to sign Van Dijk from Southampton in January 2018. Since then, they have won both the Champions League and the Premier League.

And a look at the stats show just what an impact he has made.

Van Dijk has missed just one Premier League game since joining Liverpool. His two full seasons brought a total of 196 points - they racked up 97 as they finished runners-up to Manchester City in 2018-19, then finished on 99 last season as they won the title by 18 points.

He played all 38 Premier League games that season as Liverpool conceded just 22 goals - the lowest number in any of Europe's top six leagues that season. Last season, they conceded 33, again the lowest in the English top flight.

By comparison, in the 95 league games before his debut, they let in 117 goals and shut out the opposition 29 times.

Why Liverpool could dearly miss Van DijkOnly Crystal Palace's Patrick van Aanholt (11) has scored more goals in the Premier League among defenders than Virgil van Dijk (10) since his Liverpool debut.

Since his first Liverpool appearance, Van Dijk ranks top for the most Premier League clean sheets. Only Manchester City goalkeeper Ederson can match his tally of 43.

The Netherlands captain played a big part in that record because he is so hard to beat. In 2018-19, he was the only player to figure for more than 1,000 minutes in any of Europe's top five leagues without being dribbled past once.

He also ranks second best in aerial duel success rate. Team-mate Joel Matip edges him out of top spot there, by 75.7% to 74.6%, though Van Dijk has contested far more aerial challenges - 622 to Matip's 173.

As a better comparison, Manchester United and England centre-back Harry Maguire is fourth on the list over that period, having been involved in 486 aerial duels - winning 359 to Van Dijk's 464 - for a success rate of 73.9%.

Of players to figure more than 50 times since Van Dijk's debut, only Manchester City pair Aymeric Laporte and Kyle Walker averaged more minutes per goal conceded than the Reds' centre-back.

But it is results that count. So it is perhaps most telling of all that, across all competitions, Liverpool's win rate with Van Dijk (130 games) stands at 70% - while without him (13 games) it is 46%.

Who can step up?

The concern for Klopp is whether his available defenders can step up and fill in.

Cameroon international Matip, 29, and England's Joe Gomez, 23, have shared partnership duties alongside Van Dijk in recent times - but may now be called upon to operate side-by-side.

Matip made 22 Premier League appearances in 2018-19 but just nine last term, while Gomez played 28 times last season following his 16 games the season before.

In five league matches so far this term, Gomez has started three and Matip one - with midfielder Fabinho also filling in alongside Van Dijk against Chelsea in September.

Remarkably, Van Dijk has been beaten by an opponent just eight times in 95 league games for Liverpool - a statistic neither Matip (36) nor Gomez (42) can get close to.

However, after 76 Premier League games, Gomez is yet to make an error leading directly to a goal, while Matip - having played eight games fewer than Van Dijk - has made two, against the injured Dutchman's three.

Van Dijk's aerial presence will be missed at both ends of the pitch. The Dutchman has scored 10 Premier League goals since January 2018. Crystal Palace's Patrick van Aanholt, with 11, is the only defender who can beat that total over the same period. Matip has four league goals in four years at Liverpool, Gomez has none in five.