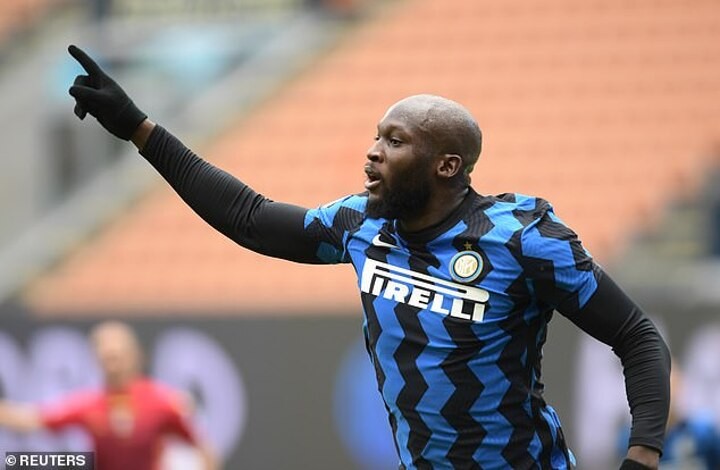 Manchester United fans reading that Romelu Lukaku is a target for Pep Guardiola's City this summer will be rightly concerned.

The Belgian is no longer the frustrating striker who would occasionally go missing at Old Trafford and never managed to make the grade at the club.

Since his 2019 move to Inter Milan for £72million, he has developed into one of the most complete forwards in the game under the tutelage of Antonio Conte.

A stunning record of 51 goals in 73 games for the Italian side is proof enough of his reliability and place as one of the few truly world-class No 9s around.

City are reportedly prepared to splurge £200m and striker is a key position being targeted, even if 32-year-old Sergio Aguero sticks around on a new deal after his current one expires in six months.

Borussia Dortmund's Erling Haaland and Benfica's Darwin Nunez are also options for City but right at the top of the list, and further down the line in his development, is Lukaku.

The 27-year-old is in his prime and making it count. It could be argued that Lukaku always had the ability at United, but the managers he worked under were unable to draw it out of him.

There's also the important point to be made that Serie A is generally of a lower standard than the Premier League so goals were always likely to flow more readily.

But there is more to it than that. Lukaku himself understands his game far better and has no problem shelving false modesty.

In December he was asked if he was among the top five strikers in the world.

His response was: 'Now? In the past five months, yes. I don't want to rank that group from one to five, but I'm part of it right now.'

He also added that a combination of lessons from both Jose Mourinho at United and Roberto Martinez combined with Conte's pearls of wisdom to improve him.

'I used to love vertical football,' Lukaku added. I found myself to be most dangerous when I was facing the goal. I am fast, I can eliminate my direct opponent with a dribble, or swerve to the left or the right.

'That was my game in the past, also because I was often in teams that played on the counter. But the national team has obliged me to adjust my playing style.

'With Belgium, we quickly became a team that had the most possession and got the least space [to play in].

'Roberto Martinez did everything he could to make me feel more comfortable with my back to goal, both with the national team and back at Everton.'

But Conte himself described Lukaku as a 'rough diamond' when he came to Inter, albeit a very expensive one.

He's polished and sparkling now, the jewel in Inter's crown and the Nerazzurri are just three points off the top of the league.

'Romelu is a different player to what he was a year ago', the manager told Sky Italia.

'He is working and you can see just the way he receives the ball, the way he moves, everything has improved.'

The way he received the ball at United was often used as a stick to beat Lukaku with, and some fans mocked his first touch.

But that is another area of his game to have sharpened up in Italy as he becomes a more refined player. He's also struck up a superb relationship with Lautaro Martinez and the pair combine well while offering different threats.

Nicolo Barella is also enjoying a breakout campaign in midfield and has a strong connection with the forward, who is reaping the benefits.

The formation usually deployed by Conte, a 3-1-4-2, also suits Lukaku as he has Martinez in close proximity while also benefiting from the wing backs playing further forward and whipping in crosses for him.

In contrast, under Mourinho, Lukaku would play centrally in a three on his own or lead the line with two wingers and an attacking midfielder behind him. He played fewer games under Ole Gunnar Solskjaer but was again central with two wingers.

While he has thrived in the 3-4-1-2 at Inter, Lukaku has done plenty of work on the nuts and bolts of his game to improve as well.

Those first touches he was once taunted over are now giving him more time to execute a finish and the stats comparison between his times at Old Trafford and the San Siro paint a very clear picture.

He's already scored more goals in fewer games at Inter than he managed at United and averages 3.1 shots per game in contrast to 2.5 before.

Lukaku is averaging 0.75 goals per game when it used to be 0.5 and he's getting in the box more too.

At United his average number of shots inside the box per game was 2.3 and now it is 2.7 with a conversion rate at 24 per cent.

He is still an out-and-out striker and his assist numbers are around the same as at United but he's more clinical now when facing goal.

When presented with a big chance, Lukaku takes it 54 per cent of the time now and if Inter go on to win Serie A this season, he'll be a huge reason why.

Lukaku also looks so much more mobile now and there's a simple answer to this one.

Astonishingly, for all the money and resources at Manchester United's disposal, they failed to diagnose a digestive problem that was swiftly detected when Lukaku was sent for tests at Inter.

'Normally I have a fine digestive system', the striker told ESPN. 'I digest everything very quickly. That’s how it had been my entire life. But what the nutritionist said to me was, it had stopped working.'

After being put on a diet of fish, sweet potatoes, shiitake pasta and cooked and raw vegetables the forward reportedly lost 10lbs in less than a fortnight.

That remarkable transformation will have had a massive impact on Lukaku's play and his ability to perform at the top level for 90 minutes.

Conte's management style has also played a part. Lukaku previously told the Times: 'He took me to another level of where I was at.

'He calls you out in front of everybody on the videos if you’re not in the right positions.

'It’s nothing to me. I’m here to improve and help the team win. I’m not here to be sensitive and if a coach cusses me out I’m going to respond to it differently.'

All of the puzzle pieces have fallen into place for Lukaku at Inter and he is the first name on the team sheet.

With that comes the inevitable interest from some of European football's heavy hitters, City among them.

If Guardiola does secure a deal for the Belgian, he'll be signing a very different player from the one United let go two years ago.