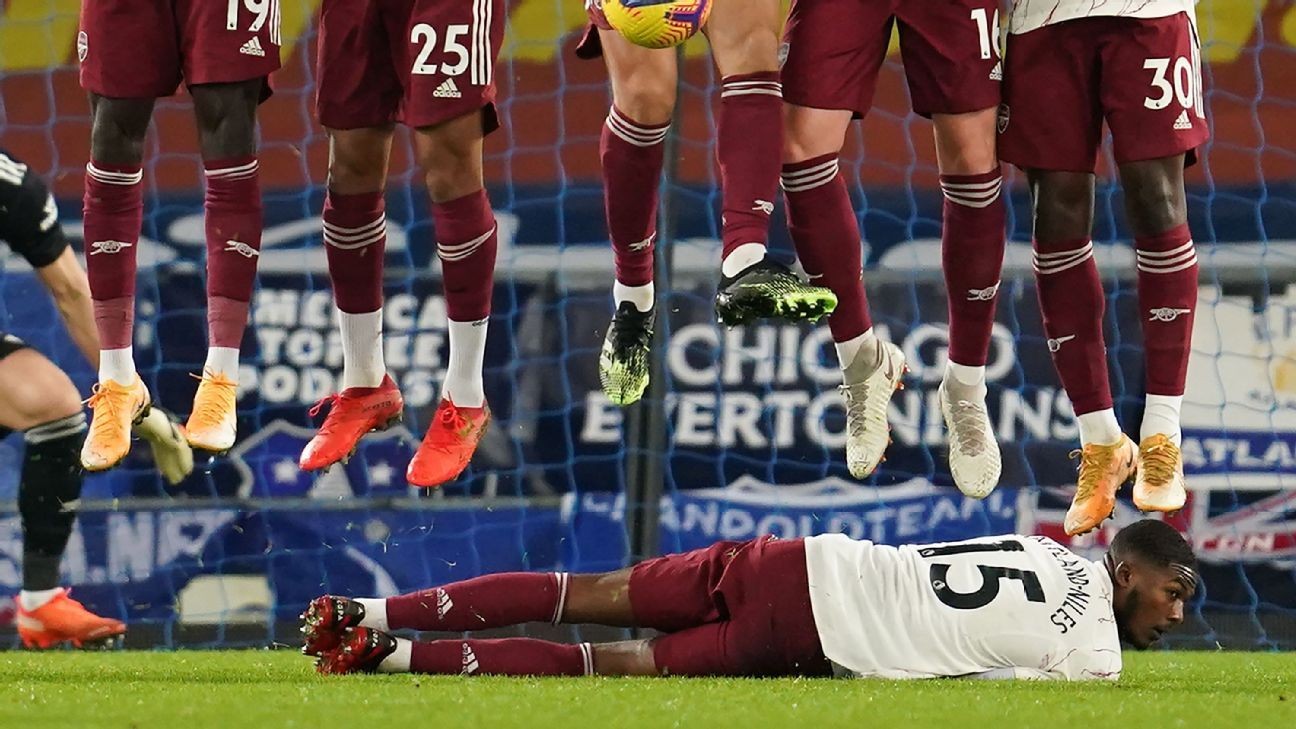 While watching matches in the Champions League and Europe's top leagues recently, you may well have noticed something a little strange going on as teams prepare to defend a free kick on the edge of their box.

Perhaps, if you were watching Arsenal's 2-1 defeat to Everton in the Premier League last month for example, you will have spotted Ainsley Maitland-Niles literally lying down behind the defensive wall in order to block any attempt at a cheeky low shot from Gylfi Sigurdsson. He is the latest player to put their body on the line in order to thwart a potential trick shot as their teammates in the wall jump when the dead ball is hit.

The defensive tactic has steadily gained acceptance in Europe since 2018, when Inter Milan midfielder Marcelo Brozovic went viral by lying prone in front of a worldwide audience during a 2018-19 Champions League group-stage match against Barcelona. Spotting that Luis Suarez was aiming to sneak the set piece underneath the wall, Brozovic flung himself to the floor to form a makeshift emergency barrier -- much to the amusement of a watching Lionel Messi.

Brozovic's unorthodox block proved to be successful as Suarez's low shot ricocheted off his prone body and harmlessly wide of the target. In fact, the manoeuvre proved so effective that many other players have sought to replicate it since -- but where did the clever, if fairly hazardous ploy begin?

The practice of forming an extra barricade first became commonplace at the elite level in Brazil, where desperate defenders had to improvise a way to counteract set-piece specialists like Ronaldinho, who had a penchant for hitting free kicks below the wall to catch goalkeepers off guard. Ronaldinho enjoyed plenty of success with his decoyed daisy cutters, including this impudent effort in the 2006-07 Champions League against Werder Bremen.

The Brazil great also enjoyed similar results upon returning to his homeland with Flamengo, scoring against Santos in the 2011 Brazilian Championship -- in a thrilling 5-4 win over a team featuring emerging superstar Neymar -- with another free kick clipped underneath the five men in the wall as they leapt in unison.

Ex-Clube Parana midfielder Lucio Flavio was another Brazilian set-piece virtuoso who quickly gained a reputation for choosing to go beneath, rather than over the wall at dead-ball situations. After getting wise to the ruse, defenders began trying to impede Flavio by laying a man down behind the rest of the wall. Unfortunately, as demonstrated during a 2014 cup tie against Ponte Preta, once Flavio spotted the counter-measure he simply reverted to bending unstoppable shots over the wall and into the top corner.

By this point, the practice was a familiar sight among Brazilian defences, and it can all be traced back to a fateful Campeonato Serie B match in 2013 when Figueirense hosted Palmeiras. As Palmeiras free kick specialist Jorge Valdivia was busy sizing up a dangerous set piece on the edge of the area, everybody else was looking on quizzically as Figueirense midfielder Ricardinho took it upon himself to bolster the five-man wall by lying down behind it.

"I tend to study a lot before matches and I saw that before the game against Palmeiras, Valdivia tried to make the ball go under the wall." Ricardinho told ESPN. "I decided during the game and I didn't tell anyone. I thought the odds that Valdivia would try to pull it off were high. I had seen someone take a knee before, but never lie down."

When the free kick was given by the referee, Ricardinho told teammate Thiego (a defender who later died in the 2016 Chapecoense plane crash) to jump as high as he could, safe in the knowledge that the gap beneath him would be covered.

Crouch in trouble with in-laws after drawing Liverpool vs. Man United in FA CupHaaland's latest goals record caps off incredible first year at DortmundMeet the designer behind soccer's craziest kits

In the event, Ricardinho's courageous effort was in vain as Valdivia opted for a standard set piece that was blocked by the wall. Palmerias still won 3-2 with, ironically, Valdivia scoring the winning goal. Regardless, Ricardinho returned to the locker room at full-time to lavish praise for his actions, including a word or two from his slightly baffled coach, Adilson Batista.

"When he walked in, Adilson asked me, 'Wow, why didn't you say that to me beforehand?'" Ricardinho recalled. "Everyone went crazy, saying 'Wow, Ricardinho, you did amazing!' It was not that big of a deal at the time. But few years later, I saw an Instagram account of historical plays and it had over two million views!"

Watching on from the dugout, Adilson wasn't quite so enthused, but the former centre-back at least appreciated the theory behind his midfielder's unusual positioning as he had witnessed first-hand the low free kicks of Ronaldinho and Lucio Flavio.

"As a defender, I had already considered that -- you either jump or stay out of the wall" he told ESPN. "When I saw Lucio Flavio and Ronaldinho doing this, they performed a low shot under the second or third man because the normal thing would be for the defender to jump. Now you have to have another guy there [behind the wall] because we try to protect the goalkeeper. But lying down? There is no need to lie down. The idea was if the ball goes through the second man, there would be another one there.

"The one from Ronaldinho, it went under the second man. [The shot would be blocked] if the guy is standing behind the wall or the guy at the base doesn't jump. If you put one leg in the way, you stop the ball. You don't have to lie down like that. If one guy jumps, he could fall on top of his teammate."

For what it's worth, Ricardinho insists that he had the whole thing planned out, even taking measures to ensure that he wouldn't be accidentally trampled: "I was at a distance [from the wall] to avoid the risk of being stepped on by someone from the wall. The only problem is the hand, because you need to hide it well in the body. In that game, my hand was slightly up and was at risk.

Adilson believes that his player was not acting entirely seriously: "It was more one of Ricardinho's jokes than anything." But, whether it was horseplay or not, an innovation was born and soon others in Brazil and far beyond were inspired to do the same.

The move's journey across the Atlantic could be charted via two more Brazilians, who ply their trade in Europe -- Marcelo and Philippe Coutinho.

During a World Cup qualifier against Argentina in November 2016, Real Madrid left-back Marcelo crouched behind the wall to defend a Messi free kick in anticipation of a fake-out attempt from the forward. While not a full-on horizontal sleeper block, this could well be the first example of the concept making the leap from Brazilian domestic football to the wider international scene.

Coutinho played alongside Marcelo for Brazil that day, and he deployed the same defence technique just three months later during Liverpool's Premier League game against Tottenham, when he knelt behind his own wall at Anfield, purposefully out of view from Christian Eriksen as the Spurs midfielder prepared his strike. Whatever the route by which it entered Europe, the trend soon swept across the continent and you can now see it deployed with increasing regularity.

The technique had actually reached UEFA competitions before Brozovic's effort achieved viral status. Mata stooped on the ground and peeked through the legs of his Manchester United teammates while facing a free kick during the 2017 Europa League final. Notice that Mata's future colleague Donny van de Beek is also in the vicinity.

Bayern Munich's Kimmich, as one of the most highly rated young defenders in world football, advanced the cause in European football when he brought back the full "long border" while playing for Germany during a Nations League game against Netherlands.

A graduate of the Manchester City academy, Maffeo was obviously drilled in the burgeoning art during his formative years with the Premier League side. However, Girona were the ones to benefit when they saw their young full-back attempt to bodily block a set piece during a Spanish second division game against Extremadura.

The Serie A game between Roma and Inter ultimately finished goalless, in part due to Spinazzola's floor-level fortitude. This could quite possibly be the first sighting of the technique in an Italian top flight stadium.

The technique's trip right across Europe is complete. The Russian Premier League was finally treated to its first behind-the-wall bolster earlier this year when Aliyev took up the position during a game against Zenit -- and looked remarkably relaxed in doing so.

Keen to prove his mettle on the big stage, Sevilla midfielder Torres knew the eyes of the world were on him when he went to ground to thwart a Bayern set piece during the UEFA Super Cup showpiece. Surprisingly, Bayern's resident joker Thomas Muller doesn't look too impressed by the whole charade.

While facing Manchester United in the Carabao Cup, Brighton & Hove Albion's French striker took his name literally as he hunkered down behind the rest of his teammates in the wall to provide extra coverage. Neal by name, kneel by nature...

Making his second Bundesliga debut for Bayern at Arminia Bielefeld, after re-joining them on loan from Juventus, Costa made the case that Brazilians still do it best.

Having studied Barca's set-piece tendencies, Merida volunteered to be human buttresses behind the wall while taking on the Catalan giants earlier this season. We wouldn't advise using his face-first approach.

U.S. international left-back Robinson has clearly taken it upon himself to become Fulham's in-house under-wall specialist having been spotted adopting the position several times already this season. The young defender crossed his arms and did fine work as a human shield against West Ham in November, having also done likewise in games against West Brom and Newcastle in the past few weeks.

Along with Maffeo, here we present further proof that the sleeper technique is drilled into players coming through Man City's academy. Diaz, also a City youth graduate, thought absolutely nothing of crouching behind the Milan wall during AC Milan's Europa League game against Celtic earlier this month,

While Cristiano Ronaldo leapt highest into the air as per usual, Cuadrado got down and did the dirty work as Juve were tasked with keeping Torino's set piece expert Ricardo Rodriguez at bay during the Turin derby.

Usually tenacious in almost all circumstances, never has Atletico midfielder Koke cut a more nervous figure as the time he was deployed down behind the wall during the recent Madrid derby. Alas, with the captain's armband comes great responsibility.

Van de Beek must have been left questioning quite why he bothered signing for Manchester United as he found himself scrabbling around on his haunches during a recent outing against Sheffield United.

Valencia's Cheryshev looked like he was simply enjoying a nice, casual mid-game lie down while awaiting a Barcelona set piece to be taken.