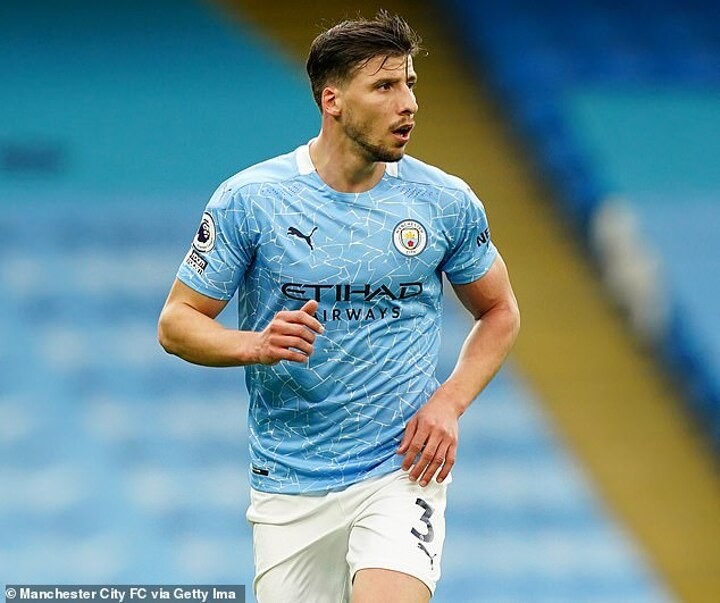 The remarkable part of Ruben Dias’s extraordinary and pivotal contribution to Manchester City is the uncertainty he had to put aside last summer. He really did not seem so sure he wanted to leave his boyhood club, Benfica, in the first place.

The Portuguese like to say that players like him at a club’s core ‘carregar a bandeira’ (‘carry the flag’) and his work ethic was a big part of it. Defending had not initially seemed entirely effortless for him, so he would be into the Benfica Campus training ground at 7am some days. On others, he would not be seen swinging out of the car park until 8pm for the half-hour drive to the family home across the Tagus river in Amadora.

‘The only player we’ve seen who gives that much to training in the national team is Cristiano Ronaldo,’ says one Portuguese contemporary who knows Dias well. ‘He was in his early 20s, yet he led the team and was always guiding and giving directions. We see him as our next national captain.’

Fans thought he might stay for years, like the club’s Brazilian centre-half, Luisao, but money talked two weeks after Benfica lost a Champions League qualifier to Salonika last September and a big chunk of anticipated income was lost.

The club drenched Dias’s departure in emotion, making him captain for his last match, against Moreirense. After the player’s departing lap of honour, manager Jorge Jesus stood up and gave a speech in the dressing room, declaring that Benfica were ‘bigger than City’ and ‘only smaller financially.’ Dias was already red-eyed when he walked into that room. When it was his own turn to speak, he wept.

There are mixed opinions about whether he was top of City’s list, as they looked for a defender in the mould of Vincent Kompany. City say he was, though the club were certainly pursuing Sevilla’s young French centre-half Jules Kounde around the same time.

No sooner had Sevilla told City that their £45million Kounde bid was still £15m short of the buy-out clause than the Dias deal was concluded. At the same time, Jose Mourinho was trying to pull strings to bring Dias to Spurs, but it was a lost cause.

Even when he had left for Manchester, there was a feeling in Portugal that Dias might not make it straight away. ‘We felt that Pep Guardiola preferred established players,’ says the Lisbon source. ‘That, despite the record City transfer fee [£64m], it might take some time to establish himself.’

But City, whose search for dependable centre-halves has been a long and expensive one, were immediately impressed by the leadership skills and way he also improved John Stones.

‘He is talking for 90 minutes, communicating, 90 minutes believing, 90 minutes saying what we have to do in every single action,’ said Pep Guardiola. ‘There are incredible players who think just in their business, but he thinks about the business of the other ones, even the holding midfielders. He makes his partner better. This is so difficult to find in world football.’

It was not always easy during City’s faltering start to the season. Dias almost conceded a penalty at Southampton — kicking out close to Danny Ings’ head. But wins build confidence. Gradually, Dias made his presence felt. The tougher the game, the better he seemed to play. His contributions to the 3-1 away win at Chelsea on January 3 and at the 2-0 win at home to Aston Villa two weeks ago will live long in the memory of City fans.

Before Sautrday's game, Opta data showed that City had conceded a goal every 161 minutes with Dias on the pitch this season, a rate bettered only by Stones and Chelsea’s Antonio Rudiger, though he has been on the pitch for more time than either of them. His nine blocks in the Champions League is the second best in the competition.

A lesser-appreciated aspect is his ability on the ball. His passing range is excellent. He has been involved in 97 build-up sequences which have ended with City having an attempt at goal, the most of any central defender.

But fundamentally he just protects City’s goalkeeper, in the overall performance. In the 29 Premier League games before he joined the club, they conceded 31 goals. In the subsequent 29 with him in the team, that has essentially been halved to 16. Players describe concentration and powers of anticipation as Dias’s great asset.

He rarely has to go to ground. He did not make a single tackle in the Champions League semi-final second leg against Paris Saint-Germain on Tuesday, which only serves to amplify his powers of anticipation. The debate will now rage about which of City’s players is Footballer of the Year.

Kevin De Bruyne and Phil Foden are both more likely recipients, though Dias is the one who has changed City, made them durable in a way they were not before.

Guardiola’s then assistant, Mikel Arteta, once observed that, ‘our defenders have to play the ball out, defend well, maintain our offside line, anticipate, know who’s pressing and where the gaps are. And after a mistake there is no hiding.’

In Lisbon, the contemporary who watched him progress through the youth ranks smiles knowingly. ‘He’ll be Manchester City’s next captain within two years,’ he says.