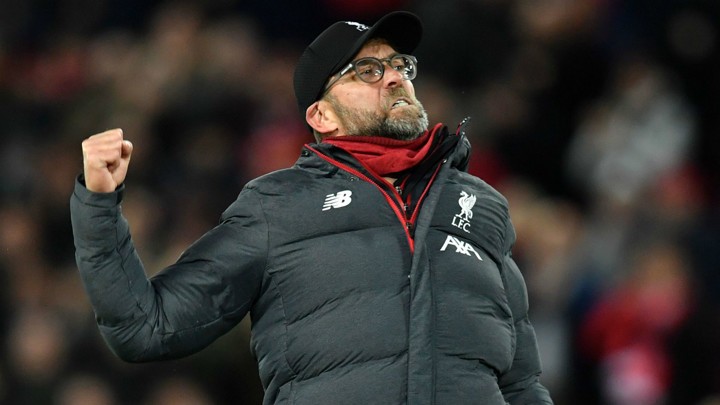 It’s official – Liverpool have made the best-ever start to a season by a club in Europe’s top-five leagues.

They have bested the previous record, set by Manchester City in 2017-18 when they accumulated an incredible 100 points – the first time any side managed such a feat in the Premier League.

And now, attention has turned to not if Liverpool will win the Premier League, but when they could do so.

Following their victory over Tottenham in gameweek 22, Liverpool need 35 more points to secure the Premier League title, which translates into 12 wins.

Should Liverpool continue to accumulate points at their current rate of winning every game (and their closest rivals also continue winning their games), they could be crowned Premier League champions on April 11 against Aston Villa at Anfield.

Man Utd's title-winning 2001 Premier League victory on April 14, 2001 with five games to spare is the fastest in the competition's history.

If the Reds are crowned champions on April 11 against Aston Villa, also with five extra games to their name, they would beat United's record by three days.

Of course, if the likes of Leicester and Man City – the teams closest to mounting a title challenge against Liverpool – drop points in coming weeks, Liverpool could wrap up the league well before April 11.

Leicester, who launched a surprising title bid, can only realistically end the season on a maximum 96 points, having already been defeated by Liverpool twice.

Still, Liverpool's title campaign is far from over. They have yet to visit the likes of the Etihad and the Emirates, not to mention further challenges in the FA Cup and Champions League.

But with the Anfield side's current form, it's increasingly likely that they will surpass the record points title set by Manchester City in 2018 of 100 points.

Manchester United hold the record for the fastest team to win the Premier League. They won the 2000-01 Premier League title on April 14, 2001 with five games left to play.

Pep Guardiola's 'Centurion' squad won the 2017-18 Premier League title with five games left to spare as well. They missed the opportunity to surpass the record set by their city rivals when they lost the Manchester derby in April 3-2.

The Red Devils, too, won the 2000 Premier League in esteemed fashion, with four games to play.

Arsenal’s Invincibles also won with four games to spare, racking up 90 points in the 2003-04 season to become the first and only side to be crowned Premier League champions without losing a single game.

Man Utd clinched the 2013 title once again with four extra when they sealed the title after defeating Aston Villa on April 28.