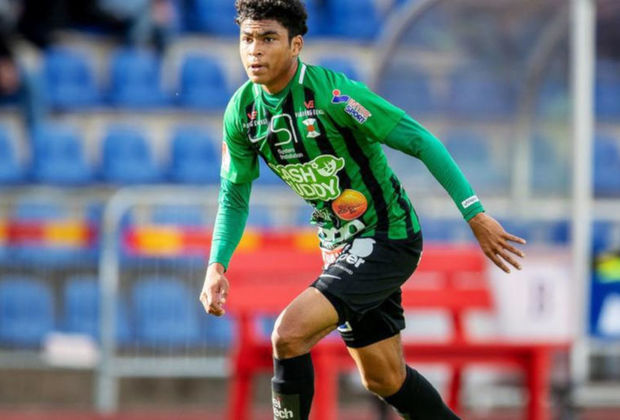 Born in an area south of Johannesburg more known for drugs and a high crime rate than role models, Ayer's unique journey makes for an inspiring tale that should give every kid in similar circumstances the right to dream.

Having left South Africa as a child the tenacious midfielder has since has proven there is a way out through sport, as he now stars in the Swedish Superttan with Varbergs BoIS as one of the youngest players in the division.

"How it happened? A scout from the Right to Dream Academy came to South Africa and I was recommended to go show myself at the Academy in Ghana," Ayer tells KickOff.com.

"I was playing for a team in Eldorado Park called Little Legends, even though I was ten years old at the time, I put trust into the decision go, I just wanted to educate myself in a safer place."

The soft-spoken teenager explains that he ventured 'into a whole new world' as he left the borders of South Africa for the first time, where he lived, went to school and played alongside some of the most talented footballers across the African continent.

"Moving to Ghana, the food, the culture, the way of life without my family, it was all different. I did struggle at first but I got used to it as time moved on."

In terms of the level of football he was exposed to in West Africa on his unique journey, Ayer concedes it's one of the contributing factors to his accelerated development into first-team professional football in Europe.

"Yeah, it's very tough, you play with and alongside ridiculously talented boys from Ghana - but I was the only South African there.

"In terms of the physical aspect, it was a real challenge up against these guys, I had to gym extra and work much harder than all of those with the natural physical attributes.

"It's something that has moulded my game, but the other part is that it's all about being smart as a midfielder. And by that I mean, it's about not letting players get close to you, don't allow the press, release the ball, one touch is enough."

He added that the move to Sweden came about during the esteemed youth tournament, the Gothia Cup, in which his performances alongside some of the most highly-rated academies across the globe drew interest from Varbergs BoIS.

"So yeah, last year, we went off to Sweden to play in the Gothia Cup, I was the vice-captain and I had a really good tournament, we played a team from Brazil, Gremio Audax, IFK Göteborg from Sweden, ASEC from Ivory Coast and Leeds United - TUKS from South Africa were there too.

"After the tournament, I went to Denmark with the team and then I got the call from Varbergs and they told me to come over to sign for them."

With Ayer currently in pre-season training with the ambitious Swedish club ahead of the 2019 season, he admits the adapting period in the Scandinavian country has been challenging due to the adverse weather conditions.

"It's a really nice country, but the weather it's really cold! In Ghana it was the complete opposite, it was super hot all the time."

"Sometimes I get homesick, but it doesn't affect me though, as I know why I'm doing this.

"I know I need to provide, knowing where I come from and my family provides the fuel to remain motivated and push me during those difficult times."