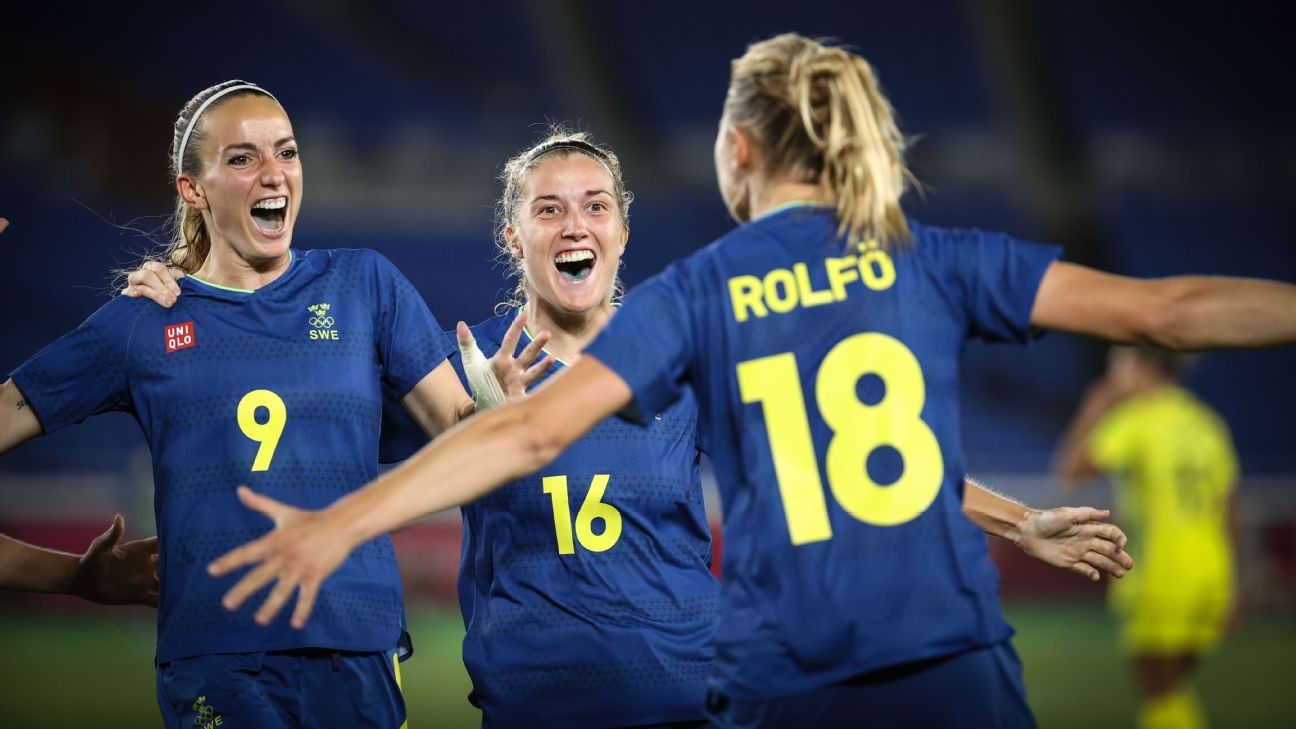 Sweden came third in the 2019 Women's World Cup and second in the 2020 Olympics staged in 2021. Could a long-awaited first-place finish at Euro 2022 be next? Ayman Aref/Getty Images

Sweden's ascension to become one of the favourites at Euro 2022 this summer has been, so it seems, a long time coming.

When the sport was waking from its imposed slumber at the start of the 1970 after bans on women's football were lifted, you only had to look to the Scandinavian triumvirate to find some of the best teams in the emerging game. Whereas Norway and Denmark have risen and fallen (and risen again) over the years, Sweden have remained the consistent performers in the region, never failing to qualify for an Olympic Games or World Cup.

ESPN FC Women's Rank: The best 50 players in the world10hESPNHuge summer of women's soccer: Your guide to Euros, USWNT qualifiers and more4dESPNLionesses are Euros favourites after big win over Dutch but early mistakes need fixing3dTom Hamilton

The first winner of a women's European Championships -- or as it was called in 1984 in its debut run, "the European Competition for Women's Football" -- Sweden have, despite their consistency, failed to pick up any subsequent winner's medals. A country that has had a fine production line of players, as well as some incarnation of league since the early 1970s, there is perhaps little surprise to the longevity of Blågult ("the blue-yellow.")

Yet, with Euro 2022 starting on July 6 -- Sweden's 11th appearance in the competition -- they have rarely looked as strong as they do now. Other nations, like hosts England and previous winners Netherlands, will be tabbed as favourites, but after Sweden reached last year's Olympic final in Japan -- losing to Canada on penalties -- their time may have finally arrived.

Peter Gerhardsson took over from Pia Sundhage and moved Sweden away from the pragmatic, conservative style that saw them beat the U.S. in the 2016 Olympics on penalties. Catherine Ivill/Getty ImagesSweden's new attack-oriented style

For all the talent in this Sweden team, their current lease on life is all thanks to their coach, Peter Gerhardsson. Named as Pia Sundhage's successor in 2017, Gerhardsson's focus with the national team has always been on the attack: he has encouraged his charges to unleash their creative side and lean on their instincts in the box. A former attacker himself, he was instantly keen to drag Sweden from an "old English 4-4-2 style" to something that could breed confidence in offensive passing and positive play.

For those who have followed Sweden, even if only at major tournaments, the gradual progress has been there for all to see. Shifting from the stodgier style of his predecessor, Sweden navigated their way through the 2019 World Cup group stage in France with little fuss, before they dispatched with Canada and then Germany, before losing their semifinal in extra time to Netherlands. More of a butterfly emerging from its cocoon in 2019 than a relentless juggernaut, Sweden then earned silver at the 2020 Olympics when the pieces fell almost magnificently into place.

Americans will remember -- or may still be trying to forget -- the opening group game at last summer's Olympics due to Sweden's dominance and the confounded stuttering of their own U.S. national team. Ahead of the tournament, the problem for the Blågult had been converting their chances. Yet, as U.S. goalkeeper Alyssa Naeher repelled all she could in Tokyo, it fast became apparent that, despite her best efforts, she was on the losing side of the battle. Sweden danced their way to a 3-0 win over the world champions and didn't look like stopping until they lined up against Canada in the final, 16 days and 10 more goals later.

With that attacking approach buoying them, Sweden went from merely a good team going into last year's Olympics, to tournament favourites to claim gold by the end, with just about the right balance of everything both on and off the pitch.

Stina Blackstenius' goal against the U.S. in Sweden's opening match of the Olympics last year announced that this is a very different side than seen in the past. Dan Mullan/Getty ImagesFrom underdogs to one of the Euro 2022 favourites

The matches in the oppressive Japanese heat at last year's Olympics should have been energy zapping -- yet, as all else seemed to be wilting, Sweden remained bright and determined until their pre-tournament inability to score returned for the rescheduled final in Yokohama. Sweden's better chances went begging as the match crawled from regulation time to extra time to spot kicks and, eventually, sudden-death penalties. Canada were victorious, 3-2 on the night, as each team scored only two of their five spot kicks before Jonna Andersson missed and Julia Grosso scored.

While Sweden fell short again in Japan, they were barely recognisable from the team that won silver at the 2016 Olympics under Sundhage's pragmatic approach, managing just four goals for the entire tournament in Brazil. Whereas Sweden's first silver in Rio had been a feat of sheer determination and agonising concentration match after match to keep the opposition out -- a tactic roundly celebrated -- their second was seen by those within the team as a painful reminder of their failure in Yokohama. As Asllani said after the match: "I'm so f---ing tired of having a f---ing silver medal."

Gerhardsson had brought expressiveness and fun to the team, and throughout his tenure there has been joy in the way the players took to the pitch -- in the way they grew and retrained their brains to be confident in being the favourites. Under Gerhardsson, Sweden became underdogs no more.

By the time they took to the pitch in Tokyo, the team was able to balance both world-beating confidence and humility in their minds, such that their tournament-opening win over the world-champion USWNT was both not a surprise but also nothing more than one win.

For the players in the Sweden squad, the Olympic final against Canada had been their first real taste of being clear favourites, of having an expectation on them to do something they never had before. The intention was to claim not just a first-ever Olympic gold in football but to end a 37-year wait for their second major tournament honours. Maybe on another day, the ball bounces slightly differently and Sweden are able to convert more than one of their 30 total shots. Or maybe it was a loss that always needed to happen, to provide a more teachable lesson moving forward.

The cliches are that you learn more from a loss than a win, or that the strife makes the eventual success all the sweeter, or that such a loss is the greatest motivator. Whatever the case, as has been seen over the five years since Gerhardsson took charge, there is little that can be thrown at Sweden's squad that they can't take in stride or overcome together.

For the veterans in the team like Seger and Lindahl -- the goalkeeper the only player who was alive, albeit toddling, the last time Sweden won the Euros -- there are only so many more times they will line up at a major tournament, and there is little more fitting than a golden goodbye.

Drawn into a group at Euro 2022 with Netherlands, Switzerland and Portugal, Sweden are more than familiar with their opposition. Unbeaten during regulation time in their last 29 matches, a run stretching back to March 2020, few teams look as strong as the Swedes ahead of the tournament. The challenge will be maintaining a consistent level and not peaking too soon.

In their third major tournament under Gerhardsson, perhaps third time's the charm.