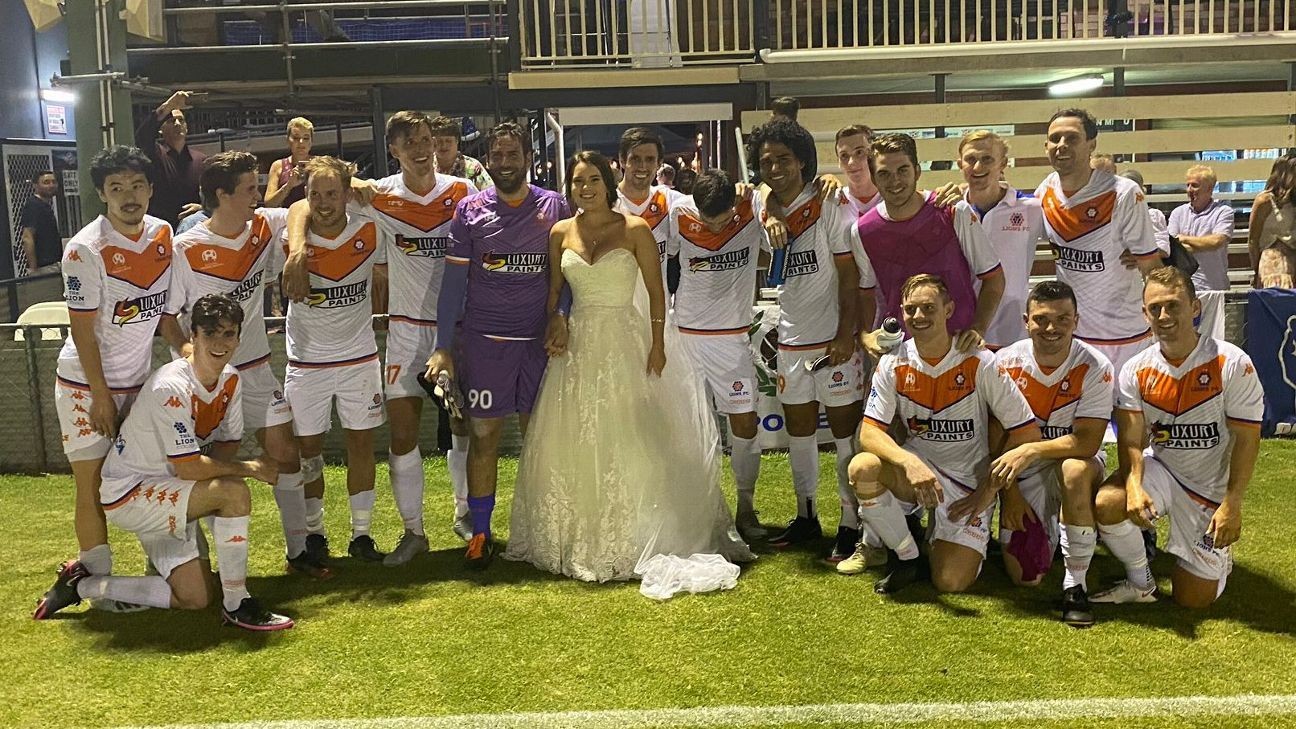 What do you do if you have a crucial football match on the same day as your wedding? Both! Goalkeeper Luke Borean simply wasn't going to let a little thing like his own wedding stop him from playing in his club's crucial semifinal on Saturday.

In a conundrum seemingly ripped straight from a romantic comedy, Borean, who plays for Lions FC in Australia's NPL Queensland competition, found himself with a most unfortunate double booking that day.

The 30-year-old was long due to marry his partner, Ellen, on Nov. 21 but, due to a COVID-delayed regular season, was now suddenly expected to also keep goal in Lions FC's semifinal against Peninsula Power.

To put it another way, there was one match made in heaven, and another one at AJ Kelly Park.

Tell me this isn't an incredible story. @lionsfc1 keeper Luke Borean came from his own wedding, with his new wife, to play the semi-final against @penpower_fc, winning 4-1.

Nonetheless, in a display of compromise that clearly shows who the real keeper in the relationship is, an amenable solution for both parties was found.

Hitting pause on the celebrations of his morning nuptials, Borean, with his new bride in tow and still wearing his tuxedo, forwent the team bus and instead jumped into a rented Ferrari to make a beeline for AJ Kelly Park; arriving in time to take up his regular position between the posts.

Still resplendent in the dress she had worn for the ceremony, his new bride promptly grabbed herself a front-row seat in the stands -- her veil neatly nestled over the back of her chair.

Get a load of the bride! 👰👀 pic.twitter.com/vCHV2Phh6e

Perhaps love being in the air is a performance enhancer as, despite Peninsula Power ending the regular season 12 points clear of Lions FC, Borean's team raced to a 3-1 lead at the half before eventually running out as 4-1 winners.

The episode will no doubt reinforce the legend that is Borean in NPL Queensland -- one of several state-based leagues that make up Australia's second-tier. The goalkeeper was already instantly recognisable thanks to his superstitiously driven habit of always wearing a beanie during games -- even in Queensland's sweltering tropical conditions -- and his Jose Luis Chilavert-like predilection for taking his side's penalty kicks.

Perhaps explaining his habit of brushing his teeth ahead of each fixture, the eccentric goalkeeper also used to suck on a lollipop during games, but now restricts that ritual to pre-game walkouts after Football Queensland knocked that on the head due to its visual similarity to a cigarette.

His new bride, who must have the patience of a saint, will now likely have to wait a week for her honeymoon; Lions booking themselves a place in next week's Grand Final against either Olympic FC or Gold Coast Knights.