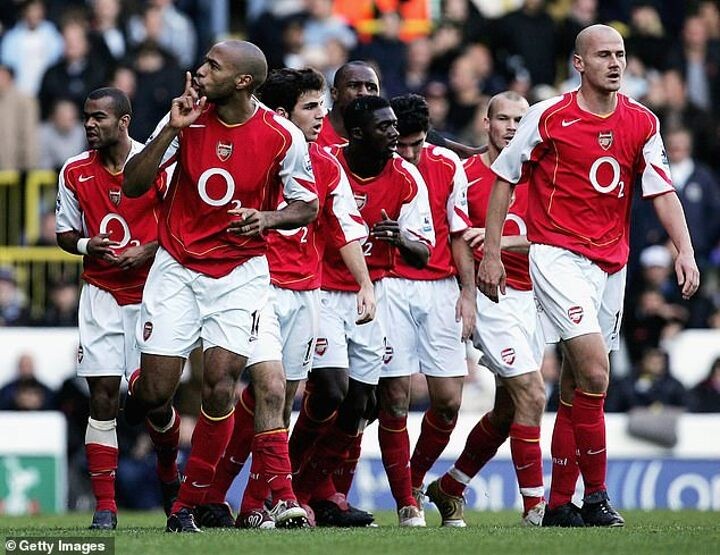 Any reference of 'Tottenham' and 'power shift' in the same sentence is usually dismissed with a soft chuckle when speaking to an Arsenal fan.

It's the debate raised nearly every season. Are things finally shifting in north London? For so many years Arsenal provided the answer on the pitch. Across two dominant decades and 21 consecutive seasons they finished above Spurs, who were unable to dish up any sort of response in the trophy department either.

While Arsenal dazzled in the late 90s and early 2000s, led by superstars like Thierry Henry and Dennis Bergkamp, sweeping up silverware left, right and centre, Spurs have never matched up to their haul in the Premier League era.

Arsenal's case as the dominant force used to be watertight. Slowly but surely, however, the pendulum has swung in the other direction. A team that was once a model for attractive football under Arsene Wenger has entered a new age.

Jose Mourinho's Tottenham are the Premier League leaders ahead of this weekend's north London derby, and haven't finished below Arsenal for the last four years.

With Mikel Arteta's men sitting in a lowly 14th, has the debate finally reached an end?

The 90s were largely a forgettable affair for Tottenham domestically, finishing above Arsenal just twice - in 1992-93 and 1994-95 - gave them little to shout about. Neither were impressive on their own part, coming eighth in 92-93 with Arsenal 10th, while they finished 7th in 94-95 compared to Arsenal in 12th.

From then on the gap really began to widen as the Gunners started to blossom under new boss Arsene Wenger. His arrival had an immediate impact as the team finished 3rd in his first season, with Tottenham lagging behind in 10th, and the following year came his first Premier League crown.

Led by top scorer Bergkamp, Marc Overmars and Ian Wright, Arsenal earned 78 points and scored 68 times, with 23 wins along the way. There couldn't be a much starker contrast as their neighbours down the road slumped to 14th place.

Arsenal remained consistent under the leadership of Wenger, remaining in the title conversation with three 2nd-placed finishes in a row before the arrival of Thierry Henry made them a class apart.

The Frenchman inspired two more Premier League titles in 2001-02 and 2003-04 - finishing as the top scorer in both. As if their Invincibles season wasn't painful enough for Spurs fans, they added insult to injury by lifting the trophy at nowhere other than White Hart Lane.

The highest Spurs could finish in that time was 9th. There was simply no comparison to their bitter rivals, who were making a mockery of their head to head record too.

Their last defeat to Tottenham had come in November 1999. That embarrassing run would go on to stretch 11 years until Harry Redknapp's side earned a 2-1 win in 2010.

Arsenal's move from the fortress of Highbury to the Emirates in 2007 was when the complexion first started to change.

The finances involved in the move restricted the Gunners in the transfer market, forcing them to sell several of their best players and left them trailing in the title race.

Out went Henry, who joined Barcelona for £21m in 2007, while they also lost big stars like Emmanuel Adebayor, Kolo Toure and Samir Nasri to the then rising Manchester City.

Arsenal still managed to keep their heads above water and regularly finish in the top four.

While there were some close calls, they twice saw off the challenge of Martin Jol's Spurs, who were knocking on the door of the Champions League places, in 2005-06 and 2006-07.

There was still the annual celebration of 'St Totteringham's Day' - when Arsenal's rivals could no longer catch them. But towards the end of the decade a sleeping giant was starting to awaken down the road.

Redknapp had broken Tottenham's hoodoo over Arsenal with a 3-2 win at the Emirates and had taken an underachieving bunch to the Champions League for the first time in their history.

The club's owners ENIC were showing their ambition with plans for a sparkling new stadium while stars like Gareth Bale, Luka Modric and Rafael van der Vaart brought glamour to the Lane.

A rivalry that was always fierce but never competitive now had some bite to it.

Spurs would have to wait a few more years to finally finish above their rivals but three points against them was no longer seen as miraculous. The gap was narrowing as they remained in touching distance.

The Gunners pipped them to third place on the final day of the 2011-12 season - which cost Spurs a place in the Champions League thanks to Chelsea winning the tournament - and edged them out of the top four the following year after Andre Villas-Boas had taken over.

Mauricio Pochettino taking the reins in 2014-15 had the biggest impact, as Arsenal fans began to tire of Wenger's tenure, which had turned stale. But they will never forget how Spurs somehow 'finished third in a two-horse race' in 2015-16.

Pochettino's men had battled Leicester for the title for much of the season, but the Gunners leapfrogged them to come second on the final day.

Spurs finally ended decades of heartbreak in 2016-17 as they celebrated St Totteringham's Day being 'cancelled'.

The club's best-ever Premier League campaign saw them rack up 84 points and finish second behind Chelsea, while Arsenal finished outside the top four for the first time in more than 20 years.

Wenger clambered on for one more year before passing the torch to Unai Emery. The discontent lingered on the red side of north London as Arsenal fans clung to their superior trophy record over Spurs - which remains unrivalled to this day. Four FA Cups since 2014 compared to Tottenham's one League Cup in 2008 is the real sign of a top club, they would claim.

Even when the club looked a wounded animal after sacking Emery and handed Arteta his first job in management, the Spaniard still managed to win the FA Cup and Community Shield in his first season.

But with Mourinho at the helm, there is more optimism than ever that he can win the silverware they crave.

Topping the charts at this stage of a season for the first time since 1985 is an indication of how close he is to achieving that.

On the flip-side, Arsenal are in crisis. While Tottenham have been spurred on by career-best performances from Harry Kane and Son Heung-min, Arteta is failing to get his star man Pierre-Emerick Aubameyang ticking and is finding himself under increasing pressure after five losses already.

Another defeat in a game that means so much will leave him staring down the barrel, but this derby also has the power to inspire. This season is far from set in stone and plenty can change between now and next summer. But for the time being there can be no doubt - Mourinho's men are the power players in north London.