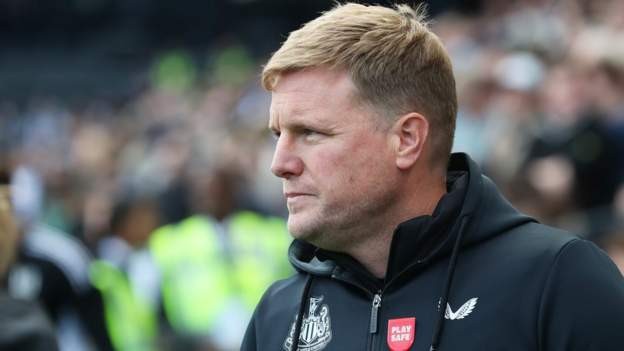 A year to the day since Saudi Arabia's Public Investment Fund bought the club, Howe said he understood concerns over the Gulf state's human rights record..

"But for me, the directors' and owners' test ratified by the Premier League, I have faith in that process," he added.

Howe was named Newcastle boss a month after the takeover, on 8 November 2021.

The Saudi-backed consortium purchased the club for £305m last October and have since spent more than £200m on players including Bruno Guimaraes, Kieran Trippier, Sven Botman and Alexander Isak.

"Obviously I've been the decisionmaker behind where some of that money has gone, and I've looked at it purely from a football perspective trying to recruit the best players for Newcastle," Howe said.

Always about the football for me - Howe

Accusations of 'sportswashing' - using sport to improve a nation's tarnished reputation - have been levelled at the Saudi government not just in regard to their purchase of Newcastle but also their role in the creation of the LIV Golf Series, plus the staging of high-profile boxing and wrestling events in the country.

Asked if he understood why some people were uncomfortable with the takeover, Howe said he did but reiterated his stance of being concerned only with footballing matters at the club.

"I've said this right from day one - it's always about the football for me," the 44-year-old added.

"If I veer too far from that and I go into areas of the club that won't benefit my players or the team, then I'm not going to do my players justice."

But Howe oversaw a run of 12 wins from their final 18 matches to comfortably lead them to safety and has guided the Magpies to seventh place after eight games of the new Premier League season.

"The club has come a long way," said Howe, whose side host Brentford on Saturday - a repeat of his first match in charge last autumn, a memorable 3-3 draw at St James' Park.

"The positivity first and foremost was what hit me with everyone connected with the club and what may lie ahead. That positivity is still there and that is a difficult thing to keep.

"Everyone behind the scenes has done a very good job in terms of putting the building blocks in place for what the club needs for long term success and hopefully we can deliver that."