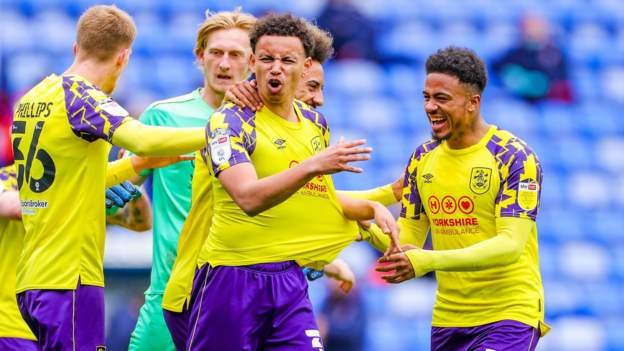 Rarmani Edmonds-Green scored an injury-time equaliser as Huddersfield Town ended their campaign with a draw at Reading.

The visitors went in front through Josh Koroma's free-kick, but Michael Olise levelled from the spot almost immediately.

Yakou Meite headed in Olise's cross to put the Royals ahead on 27 minutes.

Huddersfield applied late pressure and were rewarded when Edmonds-Green slipped the ball home.

Despite that goal, the Terriers finished with 49 points, their lowest tally outside of the Premier League since 2002-03, when they were relegated from the old Division Two.

Relive the final day in the Championship

There were no such fears on the final day, despite a run of form that saw them pick up just one win from their last 10 games.

Reading, meanwhile, finished as the best of the rest outside the top six - their highest league finish in four seasons.

Olise - a reported target for Premier League clubs - got his seventh goal of the season when he converted from the spot after Alfa Semedo was fouled before setting up Meite to score.

In the closing seconds, Huddersfield sent goalkeeper Ryan Schofield up for a corner and when Reading failed to clear, Edmonds-Green pounced.

"The last two weeks were very difficult, since we lost our opportunity for the play-offs. But today we played good football.

"In the first half it was a good comeback from not a good start. We composed ourselves, re-established our good football, and were capable of flipping the result in our favour.

"Overall, I've learned a lot [this season] and improved as a coach. I can't wait to come back and apply everything I've learned and implement the new things I've been working on for this team."

"The start of the game was very positive for us, then after we scored we knew it was not easy to defend because they have a lot of ability.

"The team was trying to attack a lot, trying to change the game, and we were playing with a lot of personality and character.

"Fortunately today, we got a point. Even if it doesn't change anything in the table, it changes a lot of feeling that we have inside of ourselves.

"As a club, we want to grow and we want to improve the squad. I want to see a better profile of the team, better performances and better results."

Lewis O'Brien (Huddersfield Town) wins a free kick in the defensive half.

Attempt missed. Josh Koroma (Huddersfield Town) right footed shot from the left side of the box is high and wide to the right. Assisted by Carel Eiting.

Josh Laurent (Reading) wins a free kick in the defensive half.

Álex Vallejo (Huddersfield Town) has gone down, but the referee deems it simulation.

Attempt missed. Kieran Phillips (Huddersfield Town) right footed shot from outside the box is high and wide to the right. Assisted by Carel Eiting.

Andy Yiadom (Reading) wins a free kick in the defensive half.