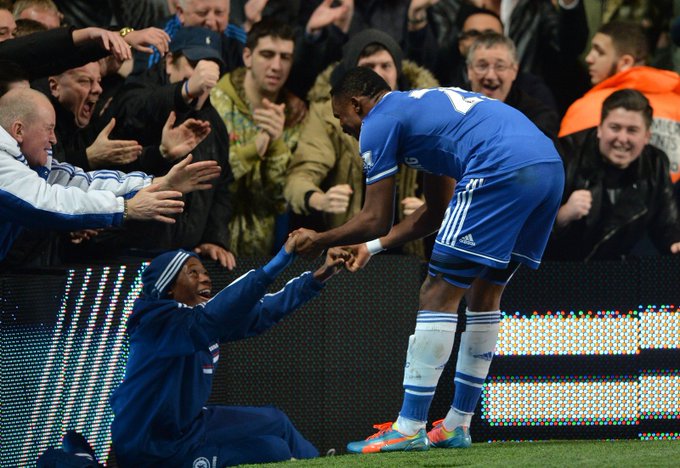 English born Ghanaian whizkid Callum Hudson-Odoi says he will always remember that moment Cameroon great Samuel Eto'o celebrated his hat-trick with him when he was a ball boy at the club.

A photo of the then 13-year old Hudson-Odoi with Eto'o resurfaced on social media with Eto'o celebrating his hat-trick against Manchester United.

A moment the 18-year old says was surreal and he took a lot of inspiration from it.

"I remember him scoring a hat-trick and the third goal was near where I was sitting in the corner. He came over to celebrate. Obviously I was happy for the team because they’d won and for him as well," he told Chelseafc.com.

"When he started celebrating, I was delighted and he just saw me, came over and held my hand. For a young boy seeing a professional footballer coming to do that for you, it was crazy. I was smiling so much," Odoi added.

Hudson-Odoi has seen a rapid development since then and is now a full professional making his senior debut last season.

"You dream of being a professional as a kid, especially at the club I’ve now been at for so long. You think, “Can I become like him or at least get to the top where he is?” and I’m now fulfilling that dream," he said.

"It’s the boyhood club I’ve always loved and played for, so I’ve always felt that that dream is there. Now I just want to carry on and keep going.

"And after that shared experience with one of his Chelsea heroes, can we expect to see a similar celebration with a ball-kid when Hudson-Odoi next gets on the scoresheet?

"Yeah definitely. If I score a goal and I see someone there, I’d definitely celebrate with them. For them it would be like a dream as well. They would feel like I felt at the time so that would be a chance for me to give back to them."