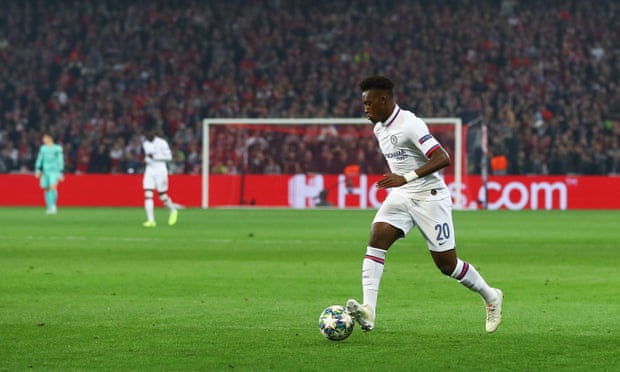 Christian Pulisic wore a stony expression in the aftermath of Chelsea’s victory against Lille. The American winger had spent the evening kicking his heels in the stands, a frustrated figure reduced to watching his new teammates kickstart their Champions League campaign without him at Stade Pierre-Mauroy.

Pulisic’s early struggles at Chelsea have emerged as one of the more intriguing storylines at the start of the Frank Lampard era. There have been flashes from the £58m signing from Borussia Dortmund, an assist in the win against Norwich in August, a bright display in the Super Cup against Liverpool, but the 21-year-old has been frozen out in recent weeks. His only appearance since the start of September came in the Carabao Cup win against League Two’s Grimsby Town last week and he did not even merit a place on the bench against Lille, much to the consternation of the US media.

Willian’s bouncer vaults Chelsea past Lille after Abraham’s birthday goal Read more Early days, of course, but there is a sense that Lampard is not convinced by Pulisic. Chelsea’s manager has told the American that he must improve in training and was critical of him after the Grimsby game. Viewed through a generous lens, it is a form of tough love from Lampard, who is not short of options in attack. The emergence of Mason Mount has pushed Pulisic down the pecking order and Lampard rates the experience of Pedro and Willian, who marked his 300th Chelsea appearance with the volleyed winner that broke Lille’s resistance.

Callum Hudson‑Odoi’s return is another complication. Three years younger than Pulisic, the England international made his comeback from a serious achilles injury against Grimsby, scoring the final goal in a 7-1 victory, and he has already pushed himself above the USA’s best player. Hudson-Odoi came on to create Willian’s goal in the win against Brighton last Saturday – Pulisic was an unused substitute once again – and he would lay on another assist for the Brazilian after replacing Reece James against Lille.

This was a big step for Lampard, the first time he could point to a substitution that swung a game in Chelsea’s favour. Chelsea’s 3-4-2-1 system worked well at first against Lille, giving them control in the centre, but they lost their rhythm after more shoddy defending resulted in the latest concession from a set-piece. Lampard reacted positively, switching to a back four and bringing on Hudson-Odoi, who made an impact with his willingness to run at defenders on the left.

With Pulisic languishing on the sidelines, the academy graduates have been the stars for Chelsea and that has led to some American fans accusing Lampard of nepotism. Yet favouritism is not Lampard’s way. He has the command of the dressing room and is not afraid of criticising players if they deserve it, no matter their popularity with supporters.

Take his analysis of Hudson‑Odoi’s performance against Grimsby. It was the youngster’s first game back from a lengthy lay‑off and his first appearance since signing a new five-year deal. He was the player the fans wanted to see, the rising talent whose frustration at his lack of playing time last season almost led to him joining Bayern Munich. His goal was the biggest moment of the night.

Lampard saw it differently. He took Hudson-Odoi to task over his failure to follow instructions to run behind Grimsby’s defence in the first half, saying that the message needed to be reinforced firmly in the dressing room at half-time, and he continued the theme before the Brighton game. Some young players, Lampard said, need cajoling at times.

Hudson-Odoi appears to have taken his manager’s advice on board. He was in the thick of the action straight away and demonstrated his desire when he shrugged a defender off the ball before showing vision and ability to cross for Willian to volley home the winner in the 77th minute.

That spikiness and incision is what Lampard expects from his youngsters. He has spoken about the competition for places in attack and he does not want to create a culture of complacency. Lampard knows there is pressure from above, a demand for trophies, even if Chelsea are building for the future. He needs his players to have that edge and Hudson-Odoi found it against Lille. It is up to Pulisic to follow suit.