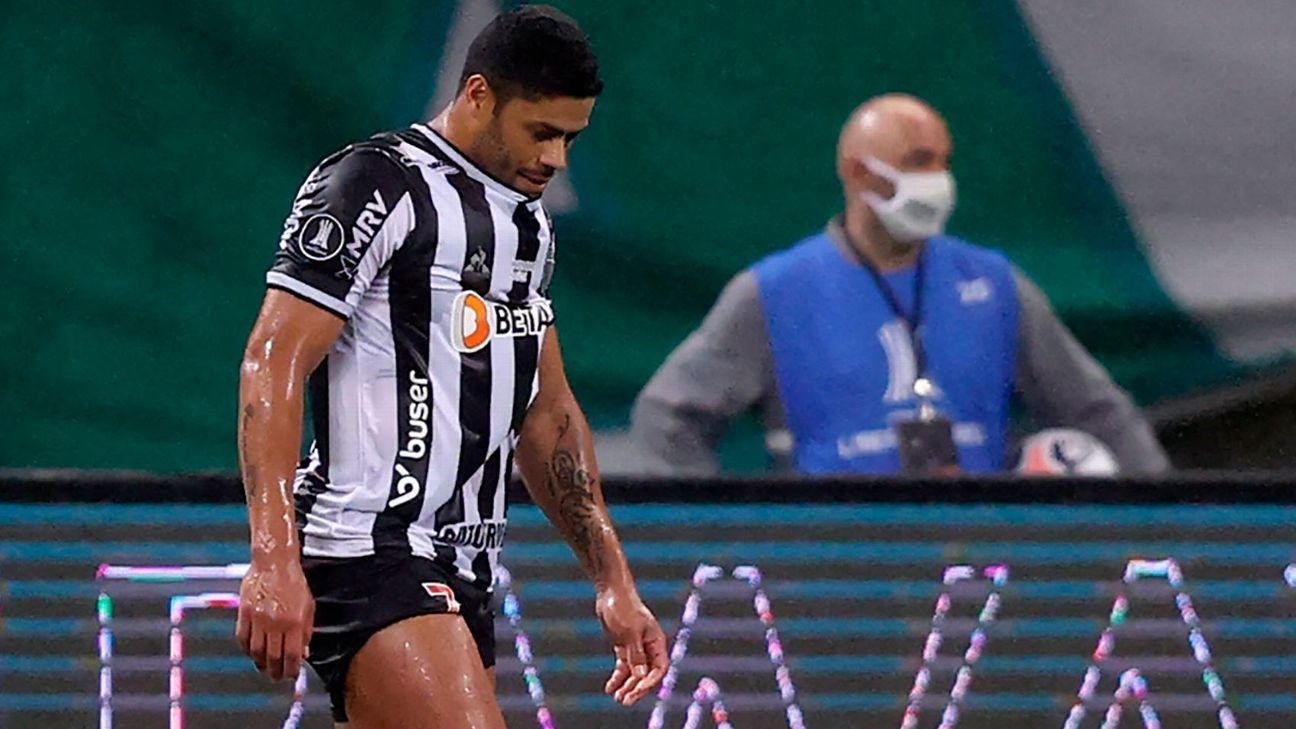 Hulk sulks after sending his penalty kick crashing back off the post. FERNANDO BIZERRA/POOL/AFP via Getty Images

With Felipe Melo and Luiz Adriano on one side, and Hulk and Diego Costa on the other, there was no shortage of experience when Palmeiras met Atletico Mineiro in the first leg of an all-Brazilian semifinal of the Copa Libertadores.

But there are times when even experience is not proof against the pressures of a key moment. Just before half-time Atletico had the chance to break the deadlock and change the course of the tie with a vital away goal when they were awarded a penalty. Up stepped Hulk, the 35-year-old striker whose form has been so good that he recently won a recall to the Brazil squad. He did almost everything right, beating Weverton, the exceptional Palmeiras goalkeeper a 'game of the eyes,' sending him the wrong way. But the adrenalin of the occasion forced a small but decisive error of calibration. Instead of nestling inside the keeper's left corner, the ball smacked against the post and bounced out to safety.

The chance was wasted, and there would be very few others -- at either end. This was a game with a grand total of one shot on target, and that was a weak long-range effort from Rony of Palmeiras which was treated with disdain by Everson in the Atletico goal. He did not even go to the trouble of bending down to pick it up, but blocked it with his foot as if he were playing a Sunday morning kickabout with his kids.

The match, then, was no classic and it finished 0-0. It was truncated and often threatened to turn spiteful, and Argentine referee Patricio Loustau needed all his skill and patience to keep it under control. But while the game will not live long in the memory, it had its intensity and it had its points of interest.

It was, as could have been predicted, an intriguing clash of styles. Atletico are the more eye-catching side. They had most of the ball, and sought to work their passing moves, punctuated with occasional bursts from Hulk. Reigning champions Palmeiras, even at home, were content to bide their time, looking to launch occasional counter attacks or to pounce on an Atletico error.

It is a method of play that requires diligent marking, and here Palmeiras stuck to their task impressively. Hulk, anxious to make up for his penalty miss, whistled two fierce long-range shots just wide in the second half. But for most of the time Palmeiras were able to grip on him, and on Nacho Fernandez, Atletico's skilled and intelligent Argentine playmaker. And Diego Costa found it tough to get into the game, though he did suffer the foul that brought the penalty.

Atletico's most striking contribution in the first half came from left-footed midfielder Allan, once on the books of Liverpool. His passing from deep proved the best way for the team to bring the attacking full-backs into play. One long pass gave left-back Guilherme Arana the chance to drag a shot just wide of the far post. And another to right-back Mariano opened up the defence sufficiently for his cross to panic Palmeiras centre-back Gustavo Gomez into going to ground and bringing down Diego Costa.

Felipe Melo and Hulk tussle for the ball. ANDRE PENNER/POOL/AFP via Getty Images

For a while there was a feeling that Atletico might even do better without Diego Costa. This could be tested 10 minutes into the second half when the striker pulled up with a muscular injury. On came left winger Keno, Hulk moved to centre-forward and Fernandez was freed to wander across the attacking line. It is the way the team have played much of their best football in recent times. But in nearly 40 minutes in Sao Paulo there was no noticeable improvement and, with the exception of a Hulk free-kick that flew wide, no more chances.

By this time it was clear that Palmeiras were happy with a goalless draw at home. They brought on younger wingers Wesley and Gabriel Veron, in hope that their speed might be a factor as players tired and space opened up. But their pace was also used as a defensive weapon, working back towards their own goal to track the runs of the Atletico full-backs. And so there was an inevitability about the scoreline as the game drifted towards the final whistle.

Palmeiras now have control over away goals. A score draw (or of course a victory) in next week's return match will send them into the final. The pressure will be on Atletico to break them down. But the home side will have some help. The first leg was played behind closed doors. Atletico have been authorised to have 30% of stadium capacity next week in Belo Horizonte, and their fans are among the most passionate around. So if the first leg was occasionally intriguing, the second should be consistently dramatic.

If the Palmeiras-Atletico clash always looked like being tight, there are clear favourites in the second semi, where Rio de Janeiro giants Flamengo, the 2019 champions, will seek to press a first-leg home advantage against the outsiders, Barcelona of Ecuador.