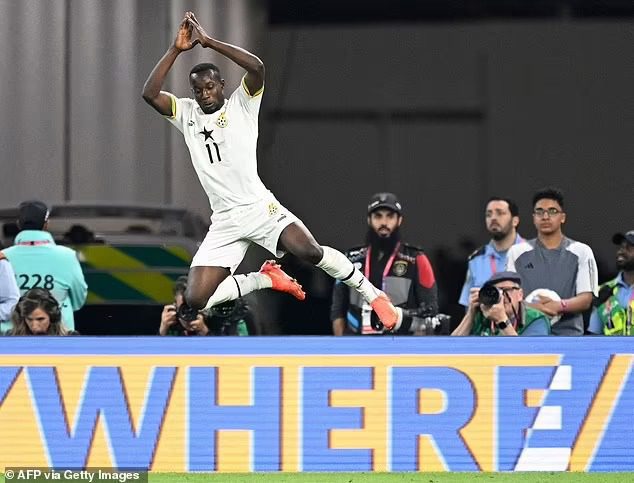 Ghana forward Osman Bukari has refuted claims that his 'Siuu' celebration against Portugal was meant to disrespect Cristiano Ronaldo.

Ronaldo had already performed his signature move, after scoring a controversial penalty just over an hour into the thrilling clash in Doha.

But Andre Ayew equalised for Ghana, before Fernandos Santos' side went on to score two more goals.

However, after Ronaldo exited with his team firmly in front, Bukari pulled one back for Ghana. The Red Star Belgrade winger sprinted towards the corner flag and cheekily yelled Ronaldo's signature 'Siuu'.

Cameras then panned to Ronaldo on the Portugal bench, who was less than impressed, throwing his hands in the air in frustration.

"I have noticed my celebration today has generated comments claiming I was disrespectful towards Ronaldo This is incorrect. I was overcome by the emotion of the moment of scoring for my country on my World Cup debut leading to my celebration.

"My upbringing doesn’t permit me to be disrespectful to elders let alone one of my idols. Thanks for your support and we focus on our next game!" Bukari explained on Twitter.

Bukari's goal made him the first Red Star Belgrade player to score a World Cup goal since compatriot Haminu Dramani in 2006.