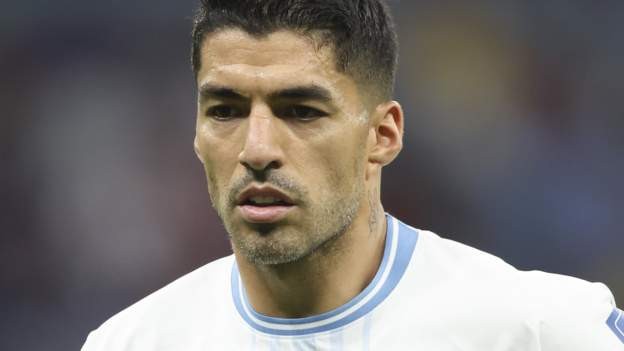 Uruguay striker Luis Suarez has refused to apologise for his handball against Ghana in the 2010 World Cup.

Suarez was sent off in the last minute of extra time in the quarter-final for denying the Black Stars a goal with a deliberate handball on the goalline.

Asamoah Gyan missed the subsequent penalty and Uruguay went through.

"The Ghana player missed the penalty, not me," said Suarez before the teams meet in a decisive Group G match on Friday in this year's World Cup finals.

Ghana play Uruguay knowing a win would send them into the knockout stage - but a defeat would see the South American side progress if South Korea fail to beat Portugal.

If Uruguay and South Korea both win, goal difference - and possibly goals scored - would decide their fate, with the Asian side holding a one-goal advantage.

It is the first time the countries have met since the game 12 years ago, and former Liverpool striker Suarez was unrepentant despite being told by a Ghanaian journalist that some in the African country view him as "the devil himself".

"I don't apologise for it," he said. "I apologise if I injure a player but I took a red card for the handball.

"It wasn't my fault because I didn't miss the penalty."

His actions in 2010 sparked outrage in Ghana, partly as a result of his exuberant celebrations on the touchline as Uruguay won on penalties. Suarez's side were then beaten in the last four by the Netherlands.

The current Ghana squad have however sought to play down talk of revenge against Suarez and Uruguay, with captain Andre Ayew - the only remaining player from the 2010 squad - saying he wants to move on.

"Everyone felt bad [in 2010] but for me I just want to get to the next stage," he said. "Revenge or not, we would go with the same determination and desire to win.

"I am not looking back, I don't want to focus on the past."