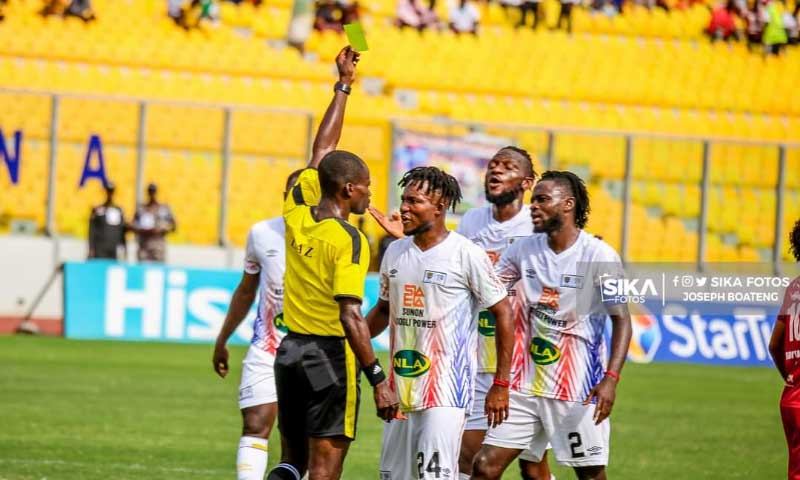 Ghanaian referee Kenney Padi says he is yet to have an erection since officiating in the Super Clash game between Asante Kotoko and Hearts of Oak in the Ghana Premier League Week 24 fixture.

The Class one referee awarded a controversial penalty to Asante Kotoko which enabled the league leaders to beat their arch-rivals by a lone goal at the Baba Yara Sports Stadium.

The penalty decision generated a lot of talks and his performance also questioned on the day.

Hearts of Oak reported referee Kenney Padi to the Ghana Football Association over his performance.

Kenny Padi in an interview on Wenchi-based Ewiase FM has revealed that he is been hunted by decision to award the penalty and has not had an erection in bed since then.

“I have not had erection since the day I awarded the penalty against Hearts of Oak".

“Sometimes I get strange and horrific nightmares, I can’t sleep.” He stated.

Meanwhile, The Ghana Football Association Match Review Panel has suspended referee Kenny Padi for the rest of the season after he was found guilty of erring in the penalty decision in the league game between Hearts of Oak and Asante Kotoko.

Padi was reported by Hearts of Oak for his role in their 1-0 loss to bitter rivals Kotoko in the Ghana Premier League.

Padi gave Kotoko a penalty in the first half, which Franck Mbella Etouga converted to secure the Porcupine Warriors' victory.

The Phobians insisted it was a dubious call, and they have been proven right by the Match Review who ruled that Padi will not officiate any matches for the rest of the season.

In the 14th minute of play, Referee Kenny Padi awarded a dubious penalty to Asante Kotoko when Hearts of Oak player, Nurudeen Abdul-Aziz won a 50 ball in their 18-yard box from Fabio Gama (No. 10) of Asante Kotoko.

The referee insisted that the Hearts player stepped on the foot of the Kotoko player which he later agreed that there was no stepping of foot after watching the video. He then defended that there was a push and pull at a point, which the video clearly showed that it was not the case.

Per the video watched in relation to the 14th minutes incident, player number 24 of Hearts of Oak challenged player number 10 of Asante Kotoko fairly. There was no foul committed which warranted any penalty. The hand on the back of the attacker had no impact on the attacker. More so the attacker should not have failing backwards if the fall was because of the hand of the defender, obviously it was not a push so falling backward suggest a premeditated attempt to fake a foul.

We also considered some factors:

The video also showed quite a number of inconsistencies in his decisions during his officiating of the match, especially after the penalty incident. The referee lost concentration.

The Panel concluded that, per the video watched, and the referee’s defense is in contrast.

Per the video watched the Panel holds the view that the referee erred in awarding the penalty. This error changed the outcome of the match.

Therefore, the Referee Joseph Kenny Padi is suspended for the rest of the season. This includes all GFA organized matches.