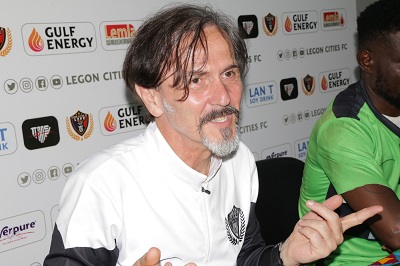 The Royals hosts the Academy Boys- who are coming into the game with a big win against Ashantigold- at the Accra Sports Stadium on Match day 13 of the league.

The home side have struggled with goals this season and face WAFA who feat Ashantigold 6-1 in Sogakope last weekend, but the Bosnian born German coach revealed he has a great deal of admiration for WAFA but he is unperturbed by their recent victory.

"They are an organise side, they are able to start games with two or three options and I have a lot of respect form them but not fear," he said at the club's pre match conference in Accra.

"We will try to do our best and do everything as possible to play this match in the best way and to get the best result possible," he added.

Legon Cities will be without key player Jeffrey Degorl, who is nursing an injury and the gaffer admits it is a big blow for his side.

"Of course, his absence has a negative impact on the team. Yes with every injury you need a replacement and that has always been the problem," he said.

The Accra based club are 14th on the league log with just 13 points after 12 games.