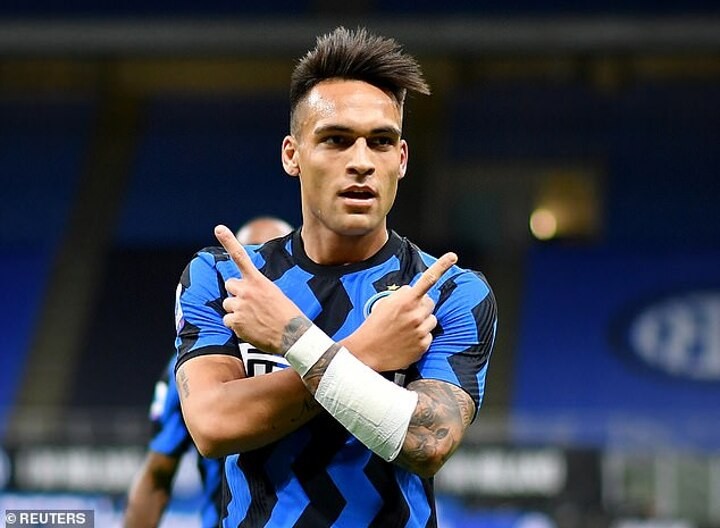 Inter Milan forward Lautaro Martinez has revealed he was on the verge of joining Barcelona, only for the move to fall through due to the Catalans' colossal financial problems.

Martinez, one of Lionel Messi's team mates in the Argentina side, was strongly linked with a move to the Nou Camp throughout last year and was said to be the Barca captain's top choice to rejuvenate their attack.

The forward, who has just won the Serie A title with Inter, said he even discussed a potential move to Catalonia with Messi before deciding to stay put.

'I was truly very close to joining Barcelona and I even talked it over with Messi,' Lautaro said in an interview with ESPN in Argentina.

'However, they had economic problems at that moment, so I decided to stay at Inter.'

Barcelona had the highest wage bill in world football last year and were put under even more financial pressure by the coronavirus pandemic, stripping them of vital revenue streams from ticket sales and sports tourism.

Their last accounts showed levels of debt over £1billion and last summer they staged a huge clearout to get big earners like Luis Suarez, Ivan Rakitic and Arturo Vidal off the wage bill.

Barca are fighting for the Spanish title and face a crunch game with leaders Atletico Madrid on Saturday, but Martinez has already sealed a Serie A medal with Inter, who clinched the title last Sunday.

Naturally, he has no regrets about staying in Milan.

He added: 'It proved to be the right decision, especially as we then won the Scudetto. It's just incredible to win the title at such an important club.'

Martinez has hit 15 goals for Inter this season, forming a deadly partnership with top scorer Romelu Lukaku to help Inter land their first league title since 2010, when Jose Mourinho was in charge.

He joined Inter for around 20 million pounds in 2018 after coming through the ranks at Buenos Aires giants Racing Club and taking the Argentine league by storm.

He also revealed that Real Madrid tried to capture him when he was a teenager, saying he turned down a move to the Spanish capital to make a name with his boyhood club, where he longs to return to one day.

Racing are the fierce rivals of Independiente, the club where Sergio Aguero rose to fame before heading to Atletico Madrid and then Manchester City.

'Real Madrid did come for me twice when I was in the Racing youth team, but I wanted to make my name in Argentine football first and only made the move to Europe when I was ready,' he added.

'I do dream one day of returning to Racing. The fans are just as 'crazy' and passionate as the Inter ones.'