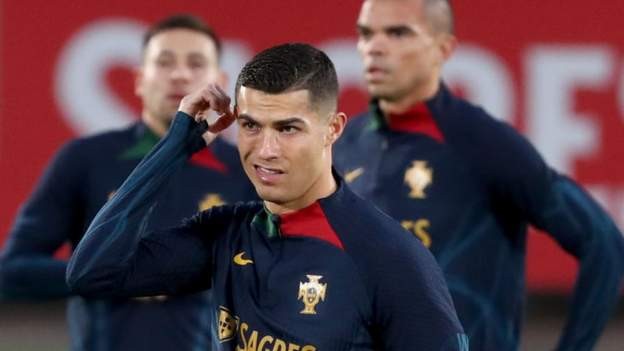 The Portugal forward made headlines earlier this week after telling Talk TV he felt "betrayed" by the club.

The first part of the full interview was released on Wednesday in which he gave more detail on his version of events at Old Trafford.

"Honestly, it was close," he said of potentially joining City.

Ronaldo returned to Old Trafford from Juventus in August 2021 - 11 years after he left the club to join Real Madrid.

At the time it was reported he was wanted by City boss Pep Guardiola and, although Ronaldo confirmed the interest, he said he decided to sign for United after speaking with his old manager Sir Alex Ferguson.

The 37-year-old added: "As you know, my history in Manchester United, your heart, you're feeling the way that you did before, makes the difference. And of course, Sir Alex Ferguson.

"I spoke with him. He said to me, 'it's impossible for you to come to Manchester City'. And I say 'OK, boss'."

Ronaldo says he feels 'betrayed' by Man UtdGlazers don't care about Manchester United, says RonaldoWhat comes next for Ronaldo?Go straight to all the best United content and get the latest on Ronaldo

Ronaldo, who will miss Portugal's friendly with Nigeria on Thursday because of a stomach bug, criticised the attitude and professionalism of young footballers during the interview, accusing them of "not respecting" their older and more experienced team-mates.

"Their hunger [is different]," he added. "I think they have things more easily, everything's easy, they don't suffer - and they don't care.

"I don't mean only a few in Manchester United, but all the teams in all leagues in the world, the youngers are not the same of my generation.

"But you cannot blame them, because it's part of the life and the new generation, the new technologies that distract them."

Diogo Dalot, right, was singled out by Cristiano Ronaldo as a player he admires

Ronaldo singled out his United and Portugal team-mate Diogo Dalot, 23, as one of the few young players he could praise.

Ronaldo also said Lisandro Martinez and Casemiro are other players he admires at the club.

'In Manchester United I can mention Dalot," he said. "He's young, but very professional but I don't doubt that he's going to have longevity in football because he's young, he's smart, intelligent and he's very professional. Probably Martinez, Casemiro is in his 30s, but I will say Dalot.'

'I'd never heard of Rangnick'

Just over two months after Ronaldo returned to United, his former team-mate Ole Gunnar Solskjaer was sacked as manager and replaced by Ralf Rangnick, who was named interim coach until the end of the season.

The German had been coach of RB Leipzig, Schalke and several others clubs in his native country and credited with influencing managers like Jurgen Klopp and Thomas Tuchel with his football philosophy.

But Ronaldo said he was surprised by the appointment.

"This guy is not even a coach," he added. "A big club like Manchester United bringing a sport directive surprised not only me but all the world."

Asked if he had heard of Rangnick, Ronaldo added: "No, of course not. Nobody, the people who I spoke to knew.

"I respect [him], all the coaches in my career I had to call them the boss, but deep inside me I never saw him as the boss because I saw some points that I never agreed."

Rooney said last week Ronaldo risked becoming an unwanted distraction at the club following his refusal to come on as substitute in the home defeat by Tottenham last month.

And the Portuguese said of Rooney: "I don't know why he criticises me so bad, I don't know if he's jealous of me.

"I really don't understand people like that or if they want to be on the front cover of the news or they want a new job or whatever.

"Probably [it's jealousy] because he finished his career with 30s. I'm still playing a high level."

On Neville, he added: "They are not my friends, they are colleagues. We are not having dinner together for example.

"But it's part of my journey. They keep criticising me every time, so I continue my trip and I have to catch up with the people who like me."

You can now get Man Utd news notifications in the BBC Sport app - find out morePodcast: The Devils' Advocate - listen to the latest episode on BBC Sounds