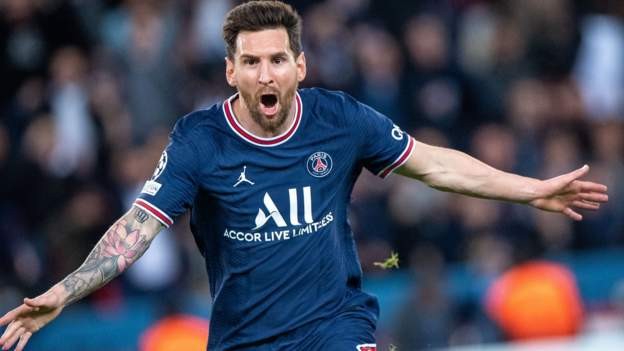 Lionel Messi's goal was his first at club level since his final Barcelona game, a 2-1 defeat at Celta Vigo in May

It was the moment European football had been waiting for - and the one Pep Guardiola knew was probably "unstoppable".

Lionel Messi glided forward from the halfway line late on against Manchester City at the Parc des Princes, played a one-two with Paris St-Germain team-mate Kylian Mbappe and left goalkeeper Ederson rooted to the spot with a shot beautifully placed into the top corner.

It was the first club goal of his entire career that had not been scored for Barcelona and sealed a 2-0 victory for the team who signed him primarily to lead them to Champions League glory.

That strike ended a run of 264 minutes without a goal for Messi since his summer move from Spain. Manager Mauricio Pochettino celebrated with a sense of jubilation. Guardiola had seen Messi at close quarters enough to know it was as good as inevitable. Messi himself was left with a huge sense of relief.

"It's true that I was getting desperate to score my first goal," Messi told French broadcaster Canal Plus. "I hadn't played much recently and I had only played once here at home but I am settling into the team little by little.

"The more us forwards play together, the better our relationship will be. We all need to grow together and improve and keep giving our best."

It has taken the 34-year-old Argentine more than a month to play his first four games for his new club because of lack of fitness, international duty and then an injury.

He had failed to score in his first three fixtures for PSG - against Reims, Club Bruges and Lyon - after joining on a free transfer in the summer.

By his standards, that was a goal drought.

PSG boss Pochettino, Messi's fellow Argentine, was delighted to see it ended. "Usually I don't celebrate goals, I keep it to myself," he said. "But today, for Messi, I did.

"I spent years watching Messi score goals from the opponent's side - so this time, scoring for my team, that's great."

How Messi (number 30) scored his goal

PSG's much-hyped front three of Neymar, Mbappe and Messi - the two most expensive players ever and the record six-time Ballon d'Or winner - showed some promising signs.

They played 44 passes between each other in total, almost 10% of PSG's total.

Former Manchester United defender Rio Ferdinand, beaten by Messi and Barcelona in the 2009 and 2011 Champions League finals, was impressed by the Argentine.

"You see the pace, strength, balance and the technique to put it where he did," he said on BT Sport. "It was phenomenal.

"He was on the periphery of the game, he is at a new club and feeling his way in. Even superstars have to do that. You see the celebrations after the goal, that is relief. He is not usually so animated after.

"We have waited and it is worth the wait for what Messi did tonight."

Ex-United and City midfielder Owen Hargreaves said: "Messi's the man for the big occasion. He always seems to score against Pep Guardiola teams."

That was Messi's seventh goal in five Champions League games against teams managed by Guardiola - his former Barcelona boss. No other player has scored more often against Guardiola in the competition.

Former City midfielder Michael Brown was watching the game for BBC Radio 5 Live: "The headlines will be taken by Messi and that's what we expect from the great man.

Guardiola won two Champions Leagues and three Spanish titles with Messi but was unable to ensure his side stopped one of the game's greats.

"We know it's impossible to control Leo during 90 minutes," he said.

"He was not much in touch with the ball - of course he was coming back from injury, he needed a bit of rhythm - but we know quite well when he can run and get close to the ball, he is unstoppable."

Messi also caught the eye because of his hard work in the game. Sixteen of his 60 touches were in his own half. He won the ball off Riyad Mahrez on the edge of his own box to stop a City attack.

Even his run for his goal - which was his only shot - started in his own half.

No PSG player had more successful passes (43) in the game.

But the moment - other than the goal - which really caught the eye was when he performed the draught excluder role for a late Kevin de Bruyne free-kick.

That is where a player lies on the ground behind the wall so the taker cannot fire in a low free-kick. It was a role practically invented to defend Messi free-kicks.

De Bruyne went high, rather than low, and his shot was saved.

"We couldn't believe it. He's one of the greatest of all time," said Hargreaves.

Ferdinand added: "The moment Mauricio Pochettino asked him to do that on the training ground, someone should have gone in and there and said 'no no no'.

'We did everything except score'

City came into the game on a high after beating title rivals and European champions Chelsea 1-0 on Saturday.

They had more chances - and better ones - than PSG, hitting the bar twice through Raheem Sterling and Bernardo Silva in one move.

PSG keeper Gianluigi Donnarumma made seven saves to Ederson's one.

"We did everything except score," said Guardiola. "They defended deep and were dangerous with the counter-attack. My biggest compliment for the team.

"The team was there - the same as Stamford Bridge. It's a pity. We played to win. Unfortunately they didn't need much to score their goals.

"We're going to eat good tonight, drink a glass of wine, recover and prepare for the Liverpool game on Sunday."

Former City midfielder Brown added: "They created a lot of opportunities and I think Pep will say 'that's football' and he will take the positives.

"He knows it's not do or die with it being the group stages. They've got a super squad and they will still continue to progress."

Ex-City defender Sylvain Distin said: "I think the intensity was there for City, they just didn't take their chances.

"They had more than enough chances to win that game."