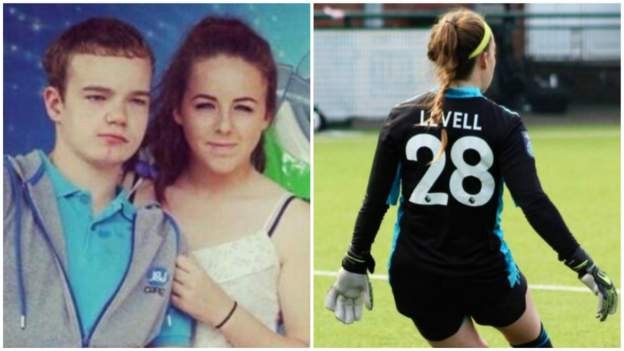 After Leicester City goalkeeper Kirstie Levell's older brother died five years ago, there was only one number she wanted on her shirt.

Levell, who wears the "special" number 28, joined Leicester in the summer and wanted something to "remind her of Dan every single time she put it on".

Dan, 24, had a sudden heart attack at the family home on 28 September, 2015 - a year after being diagnosed with bowel cancer. He was born with epilepsy which left him unable to speak and their father, Shaun, quit his job to become a full-time carer.

"The 28th is my mum's birthday and I found that really mad," Levell says. "Dan had this terminal illness for such a long time and it was like he waited for her birthday to come round before saying, 'right, that's it now'.

Last month, the Levells marked five years since Dan's passing, letting off a red heart balloon - something they do every year on his birthday in June and on 28 September.

"One time I let it go and it got stuck in a tree and my dad wasn't very happy," says Levell. "We say that goes to heaven. We believe in all that and hopefully it reaches him."

Despite being the younger sister, Levell was "the protective one" when they were growing up.

"He couldn't speak so I was the one who had his back," she says. "I always played sport and I went to karate so I thought I was the be-all and end-all. When somebody looked at him in a funny way, I would get my back up."

As a family, the Levells loved taking Dan to theme parks where he would go on rollercoasters and meet Disney characters in Paris.

"Despite his disability we always treated him like one of us. I was that annoying sister that would always do jokey things like tipping his wheelchair. I'd mess about all the time," says Levell.

"It was really strange because he understood pretty much everything - he just couldn't reply. If he needed a drink, he would wave his bottle around to hint.

"One of the funniest things was when I had friends over after school and he hummed really loudly. He wouldn't be in the room and they would ask what the noise was and I would have to tell them it was my brother!"

Levell says it was "those small things which meant a lot" and she used to cut up his tablets and feed him breakfast every day.

Father Shaun cared for Dan full time but he would always fly out to support Levell when she played in the England youth teams.

"Dan was my dad's best mate as he had someone to travel with," says Levell. "The most difficult thing was when Dan fell ill, there was always a decision over whether my dad should come and support me or stay and look after my brother. We worked around it.

"At the early stages in my life, I kind of took football for granted. I used to go to England camps and was the joker. I went for the fun. But as soon as Dan became ill, it was like something switched.

"I thought 'you know what, I need to knuckle down here and sort it out'. I was lucky to be the one playing. I was playing for Dan. I was very lucky to be in that position and have my dad there supporting me."

Levell was studying at university and playing for Everton when Dan was diagnosed with bowel cancer but she "just carried on as normal because they said it would be fine".

"I just thought, 'no, this can't be happening.' I still carried on with my football though. Even the day after he died, I went to training at Everton. He passed away in the house so I felt the worst place to be in was the house," says Levell.

"I wanted to do everything to get out when I could. Everton were so supportive. They said I could have time off if I needed it but I wanted to go in. Football wasn't only my job but it was a place to go and switch off from major things that had happened."

Andy Spence, Everton manager at the time, was "really supportive" and if you were down "he would lift you up", says Levell.

"I could drop him a text if I didn't feel like going to football one day. When I signed for Leicester, he sent me a message which was really nice. I think he will always keep in touch."

But Levell was dealt another blow in 2019 when her dad was diagnosed with mouth cancer.

"That was an even bigger challenge for me. I just thought, 'not again. I can't lose another one.' My brother and my dad were the two who always came with me to football so I couldn't lose them both," she says .

"It was a hard one to take. I took him to his hospital appointments and the day he went in for his operation, I was there to pick him up. He wanted to get on with it and didn't want a fuss."

Thankfully, Shaun has recovered and is well but Levell is determined to make her family proud when she wears the number 28 on the football pitch.

"I try not to be too emotional with my football and have too much in the back of my head but I do always think about them," she says.

And now, whenever somebody is going through a tough time, Levell's advice to them is to "just do what makes you happy".

Kirstie (centre) with her brother and sister at Christmas. She was always the "protective" one