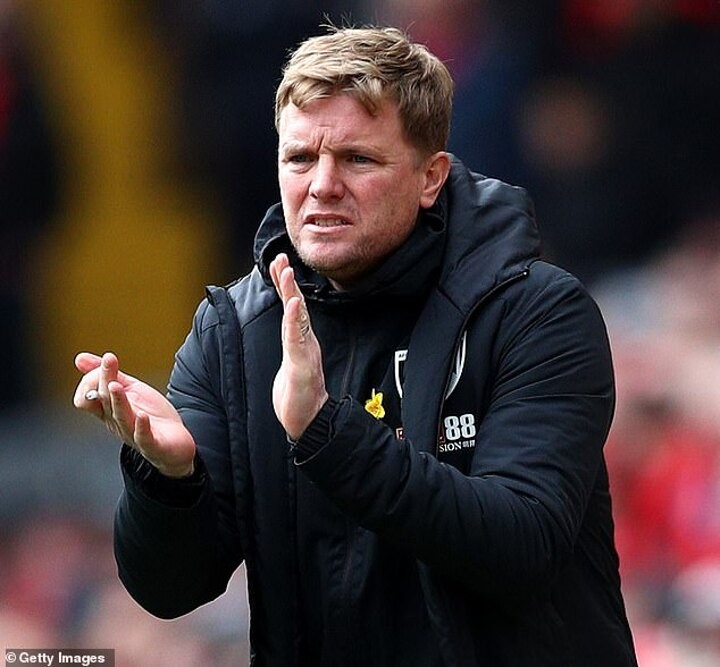 Gordon Strachan and Neil Lennon were both successful managers of Celtic. Strachan won the SPL three times in his four seasons while Lennon did so in five of his six, spread over two spells.

That doesn’t mean it was always fun. Lennon has spoken of the toll the job took on his mental health and Strachan admits to giving himself pep talks in the car on the way in to training.

‘The first person you saw every day was the security guard and I had to have a smile on,’ Strachan told this paper last summer. ‘If I didn’t, it would spread.’

The Celtic job is not unique but is at the top end of the scale when it comes to pressure, expectation and stress. Those who have done it will all tell you it is unrelenting, politically demanding and exhausting.

And this is precisely why Eddie Howe should take it if offered the opportunity.

Howe, still only 43 after all those years at Bournemouth, is at the stage of his career where his skills need to be examined at the next level.

A move to Celtic would not be a step up in football but in terms of a test of his mental fortitude, emotional resilience and energy then it most certainly would be.

Brendan Rodgers was once asked why he went to Parkhead after being sacked at Liverpool. ‘I needed to win,’ he said last season. ‘I needed to be in that position where I knew I had to win. That type of experience shapes you.’

Howe’s work at Bournemouth was exemplary. To even get to the Premier League was admirable. Staying there for five years was even more so. Relegation hurt him and stressed him. Of course it did. He felt responsible, especially in a Covid season when Premier League survival was more important than ever.

But Bournemouth is not Celtic. Everything he did there was a bonus, at least for a while. Nothing is ever seen as a bonus in Glasgow.

The league title? Expected. Champions League progress? Expected. Domestic cups? Expected. None of this is reasonable. There are other teams in the league and in the city. Rangers, revitalised under Steven Gerrard, were crowned champions on Sunday.

But still there will be no breathing space for Lennon’s successor, no honeymoon. The newspapers will have him on their back pages — and often the front — from the day he arrives until the day he leaves. Every single day. They will not always be fair to him. They will certainly not always be kind.

But what is the alternative for someone like Howe? Crystal Palace admire him and it’s a good club. Good people run things at Selhurst Park.

But what would be expected of Howe there? Decent football, a top-half Premier League finish and to make sure they beat Brighton (weirdly, the clubs see each other as rivals) twice a year? How different would that really be from what he was already doing at Bournemouth until his bubble burst last year?

And this is the point. There is such a thing as a jobbing manager in football. Club to club to club. No great ripples left behind.

Howe has never struck me as one of those. It is not long since he was talked about as an England manager or an Arsenal manager. His football is clever and brave and progressive.

Now surely is the time he had a look at the other side of the game. Howe likes to build football clubs. He likes long-term.

None of that will be available at Celtic. If he goes there, he just needs to win. That’s where it starts and ends.

If asked, he should get himself up there in a heartbeat.

Offside changes are down to Arsene Wenger

Changes to the offside law to be trialled by FIFA have a basis in common sense and are the brainchild of Arsene Wenger.

Jack Grealish's City link is a credit to his progress

It is not unusual to hear players linked with Manchester City but last week the name of Jack Grealish cropped up in a conversation. City don’t need him. They have so many creative players of that ilk already and a centre forward will be their priority.

Even so, it is credit to the Aston Villa player that he is even being talked about. The strides he has made this season have been impressive.

Changing of the guard at Crystal Palace

Sometimes in this business, phone calls about one story lead you to the doorstep of another.

So it was last week that checks on Chris Wilder’s fast-deteriorating situation at Sheffield United threw up news that he has been checked out by Crystal Palace as a replacement for Roy Hodgson. Wilder is not the only name on that list. But there is a list.

Palace are said to be undecided but Hodgson’s days may well be numbered.

A former Cardiff manager once described working for owner Vincent Tan as ‘like taking a tiger for a walk’.

Mick McCarthy is the latest man holding the leash and has won seven and drawn two of his nine games to take Cardiff to the brink of the Championship play-offs.

Tan is said to be less unpredictable these days and Cardiff have just given McCarthy a longer contract. If anyone can bring the tiger to heel, it’s him.