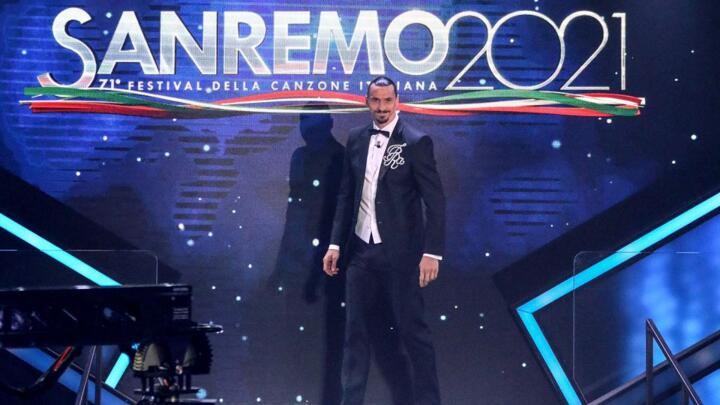 AC Milan star Zlatan Ibrahimovic declared "I have been the best on this stage" after making his controversial debut at the Sanremo festival.

Ibrahimovic on the end of criticism for attending Sanremo

Ibrahimovic has been criticised for attending the music event, which spans four days, while Milan fight for the Serie A title.

It also comes as the 39-year-old forward nurses an injury, forcing him to miss Wednesday's clash against Udinese at San Siro after exiting Sunday's win away to Roma.

But Ibrahimovic looked comfortable on Tuesday, stepping out on stage as co-presenter while joking with fellow presenter Amadeus.

"It is an honour to be here, but also an honour for you to have me here," Milan's top goalscorer Ibrahimovic told Amadeus.

"Normally I feel big, powerful, but here I feel small. Still bigger and more powerful than you, though."

Ibrahimovic added: "First of all, there will be 22 singers in the competition, 11 against 11, otherwise it's not right.

"Seeing as there are 26, sell four of the singers, I hear Liverpool are looking for players. If not, put them in the garden and I'll get them working.

"The second rule is about the stage. It's too small, made for small people like you. I need the stage to be 105 metres by 68 metres, like the pitch at San Siro.

"No stress, don't worry, as long as Zlatan is here, everything will be fine. Zlatan's Festival lasts 90 minutes plus stoppages.

"I have been the best on this stage. Not just tonight, but of all time."

Ibra on 14 Serie A goals for second-placed Milan

Ibrahimovic has scored 14 Serie A goals this season – only Juventus superstar Cristiano Ronaldo (19) and Romelu Lukaku (18) have managed more – as Milan sit second in the table, four points behind leaders Inter.