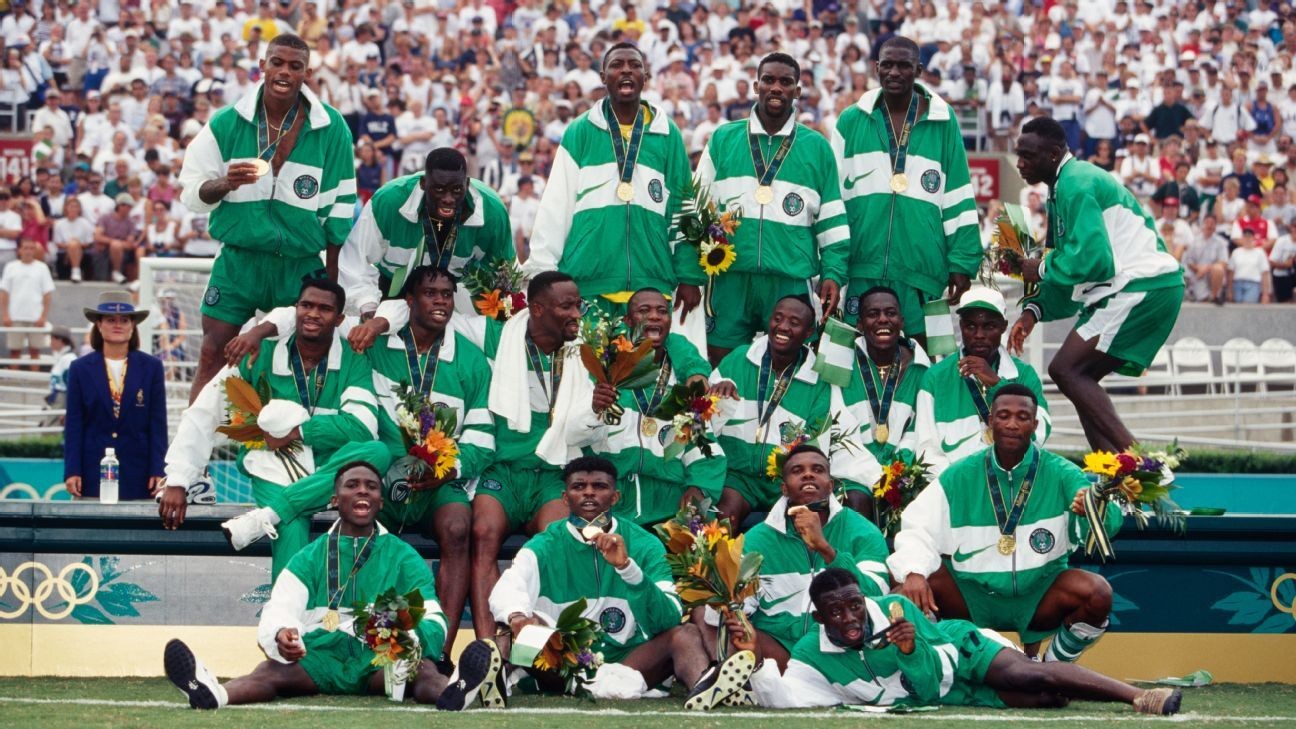 Bedlam broke out on a continent halfway across the world when Pierluigi Collina blew the final whistle on the Olympic football tournament final on Aug. 3, 1996.

In Nigeria, where it was the wee hours, thousands of fans poured into the streets, singing, dancing and doing donuts on bikes and cars. In that moment, the atmosphere was one of undiluted celebration. Nigeria had just become Olympic champions with a 3-2, come-from-behind victory over Argentina, and the unthinkable had become real. History had been made, and the accomplishment affected aspiring footballers of all ages.

"Though I was very young when that happened, I have heard a lot about it," Ighalo told ESPN. "But I watched the games later, and it inspired me a lot because, when you talk about Nigerian football, people always remember that team.

Osaze Odemwingie was 15 years old, born of a Nigerian father and Russian mother and living in Russia at the time. He says the gold medal inspired his decision to play for Nigeria.

"I was in Russia then, in Naberezhnye Chelny, my city, playing for Kamaz FC," he told ESPN. "And that's when I made my bold statement and declaration that I was going to play for Nigeria.

"And my boys were like, 'yeah, yeah, dream on,' because they saw some serious footballers there, some serious talents. It was amazing to watch [Nigeria] beat Brazil and then Argentina with the kind of players they had then -- Roberto Carlos, Bebeto, Ronaldo ...

"Wow, it was amazing, of course, to watch that. And not just win. Win with classic football style, great kids. That Olympics inspired me a lot."

Odemwingie is one of those aspiring players who was old enough to watch and be awed by the history being made.

Crotone FC forward Simeon Nwankwo was not so fortunate. He was 4 years old at the time, but he got to see the videos when he was older.

"As a young kid growing up, I loved playing football and everything, but my dad got those videos and brought [them] home for me to watch," Nwankwo told ESPN. "I saw how my idol, Papilo, terrorized everybody, and then you know the stories about the things that happened on the nights of the moment and everything and how crazy it was.

"That year is something that they still talk about 'til today. I wanted to be part of something like that, and it was a very good moment for me. That's when I started dreaming every day and every night to get to that level where I can say that I played in the big stage."

Former African Footballer of the Year Emmanuel Amunike swept home the winner in the five-goal thriller to write his name into Nigerian football folklore, but he remains humble.

"I could say I think we are grateful for the opportunity," he told ESPN.

"As a young player and an athlete, everyone is nursing their ambition to have the opportunity to participate in the Olympics and the World Cup. ... For us in 1996, having the opportunity to be part of that great team with great players with a lot of talent was a privilege."

The manner of victory provides a lesson that Amunike says Nigerian teams must continue to draw from. The lesson is hard work, determination and teamwork.

"Did we expect that we're going to win it?" Amunike said. "Actually, you can never know in every journey you're involved in what might be the outcome, but of course, the important thing is that we were determined, and we knew that we had good players. ... The only thing is how can we find that common ground to play as a team, to defend as a team, to take our chances and also attack as a team.

Amunike, who subsequently led Nigeria to win the FIFA Under 17 World Cup as a coach, is pleased to know that many players were inspired by the efforts of his team in Atlanta 24 years ago, and he says African football should continue to build from there.

"The Olympic gold opened a lot of doors to Nigerian young players -- and to Africa also," he said. "After we won in '96, Cameroon won the next one [2000 Olympic Games in Sydney] also. That was great for Africa.

Odemwingie says the 1996 accomplishments will remain forever in Nigerian hearts and heads.

"It was unreal," he said. "They always will carry an aura around them because of what they've done in their lives. And that aura doesn't go anywhere. All other things can change, but that aura is going to always follow them because they brought so much joy to people's lives."

That might be an even bigger accomplishment than the gold medals they won.