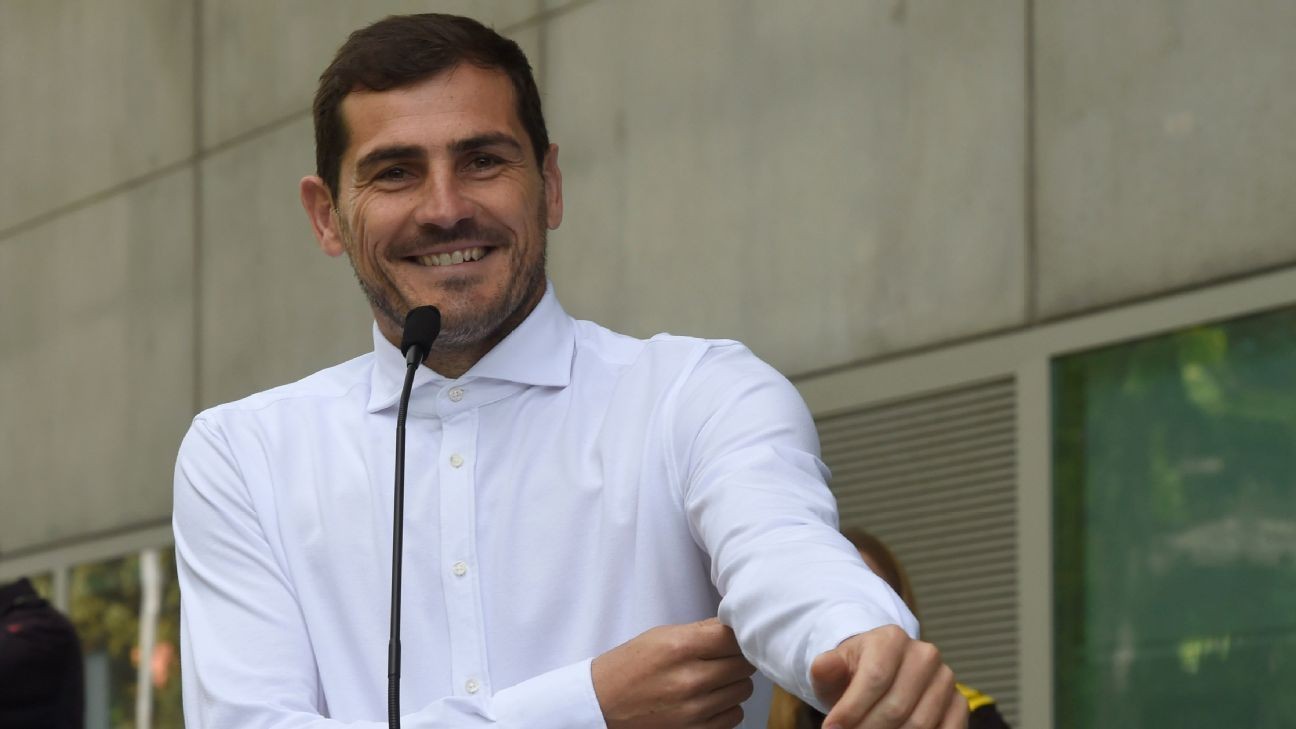 Casillas suffered a heart attack in 2019 that caused him to step away from the game briefly and focus on his recovery. He would eventually announce his retirement Tuesday. Miguel Riopa/AFP via Getty Images

Whether you embrace the biblical version (Proverbs 24:16) or the Rocky Balboa variation, the concept is the same. Life hits you hard and often. And it's not about the falling down, it's about the getting back up.

There are many ways to celebrate the career of Iker Casillas, who retired Tuesday aged 39, some 21 seasons after making his top-flight debut for Real Madrid at 18. The goalkeeper captained Spain to their first ever World Cup and won two European Championships and 167 caps along the way. He won five league titles, two Copas del Rey and three Champions League crowns for Real Madrid. Only one man has made more appearances for the club in its illustrious history.

Casillas and Xavi, who first bonded at the 1999 World Youth Championship in Nigeria, will forever be remember for having the humility to bridge the often-vicious sporting, political and cultural divide between Madrid and Barcelona at national-team level, a split that had long caused La Roja to massively underachieve, thereby putting together perhaps the greatest period of international dominance by any footballing nation.

Fine reasons, all. But what stands out to me, what makes Casillas somewhat different is that he's been a portrait of resilience throughout, taking more than his fair share of licks and each time bouncing back.

Casillas is not the only one to have overcome adversity, time and again, of course. But few have had his sort of journey, one where you start at the very top, with greatness thrust upon you. Indeed, the fact that he arguably peaked a decade ago and had the rockiest stretch of his career in his early 30s, when most keepers are supposed to be at the height of their powers, makes him all the more compelling.

Casillas wins the starting keeper job at Real Madrid in the 1999-2000 season and starts for them in the Champions League final later that season, four days after his 18th birthday. Ten days later, he gets his first cap for Spain. A year later, he wins his first Liga title.

At 20, Casillas is the goalkeeper of the first iteration of the Galacticos, with Luis Figo, Raul and Zinedine Zidane. The launch angle to his career is nearly vertical at that point and yet, in the second half of the 2001-02 season, the wheels come off. He has some poor performances, struggles in the way young keepers are wont to do and is dropped in the spring. Suddenly, he is too small. Too young. Too attached to the club colors to be cool under pressure.

He is, as usual, on the bench for the 2001-02 Champions League final in Glasgow, watching Real Madrid take a 2-1 lead over Bayer Leverkusen thanks to Zidane's epic long-range wonder goal. And then, with 22 minutes to go, Cesar Sanchez, who had supplanted him as Madrid's No. 1, falls hard on the Hampden turf and signals for a change. Casillas comes on and makes a string of stops, two of them spectacular kick-saves, to preserve the victory. A few months later he is again Madrid's starting keeper, a job he would retain for the next decade.

Casillas had been metaphorically kicked in the gut. And he had gotten back up when it counted most.

There might be a parallel universe in which Cesar doesn't get hurt, Casillas doesn't come on, Real Madrid still win the cup and he remains a backup who then leaves the Bernabeu, frustrated at the lack of opportunities. Fate reopened that door for him in that final, but he was ready to step through it. That's the thing about getting back up; sometimes you need a lucky break to be able to do it, but it's still up to you to be ready when the moment comes.

Fast-forward 10 years. It's the 2012-13 season, Jose Mourinho is in charge and the rivalry with Barcelona is as poisonous as ever. So too is the atmosphere at Real Madrid. Mourinho suspects there's a rat in the dressing room, airing the club's dirty laundry. As the club struggles, threatening to implode, fans are split between Mourinho-backers and Mourinho-haters. Casillas becomes a scapegoat, blamed for being the dressing room mole. He's dropped for backup Antonio Adan, and to reinforce the point, Mourinho buys another keeper, Diego Lopez, halfway through the season.

Officially, Lopez arrives because of an injury to Casillas' hand, but he keeps the starting job even after Casillas regains full fitness. The writing is on the wall. Casillas' morale is at a low ebb.

Even though Mourinho leaves at the end of the season, Casillas knows Lopez is an exceptional keeper. So too does Carlo Ancelotti, the man who replaces Mourinho. Casillas makes too much money and wields too much power for a backup. President Florentino Perez wants to bury the nightmarish final season under Mourinho and purge the venom still in the club's system. There's a World Cup title to defend the following summer, too; Casillas knows he can't do it as a reserve and seriously considers moving on. But he doesn't. He stays to compete for the starting job and again, he's rewarded with a helping hand. Ancelotti opts to split the job. Lopez plays in La Liga, Casillas gets the Copa del Rey and the Champions League. Real Madrid go on to win both competitions and he starts every game along the way.

And just as Casillas is back up again, lifting Madrid's 10th European Cup in Milan, there's another kick in the groin less than three weeks later. Spain get humiliated 5-1 by the Dutch in the World Cup opener, a rematch of the 2010 final. Casillas makes at least two massive errors. All he can do is admit his fault and say it was the worst game of his career ... which it probably was.

Once again, he's down. His international career is in doubt with the emergence of Manchester United's David De Gea and, at club level, he has to deal with both Lopez and the newly arrived Keylor Navas.

play1:25Cristiano Ronaldo to PSG? 'It's too late'

Many want Casillas gone. He is not the keeper he was, and he might never be again. But then, another helping hand and, as ever, he's ready to grasp it. Lopez is sold to Milan and Ancelotti names Casillas as his starter, but the joy lasts until the end of the campaign. Ancelotti is sacked, Rafa Benitez comes in and Perez unceremoniously shows Casillas the door. He's 34, by no means old for a keeper, but when you leave Real Madrid, especially when you've been there since the age of 9, the only way is down.

There were rumours that Casillas would retire; instead, he signs for Porto as a free agent. A smaller league in Portugal, and less money, but a chance to play. And, more important, to get back up. He plays for four seasons, enduring both the thrills of another league title as well as a sustained period on the bench in his third year, followed by a return to the lineup. It's a microcosm of his career: another fall, another rise.

Casillas' last stumble was a heart attack in May 2019. He returned to training and, after months of uncertainty, opted to call it a day on Tuesday, saying farewell with a social media post that speaks volumes: "The important thing is the path you travel and the people who accompany you, not the destination that it takes you."