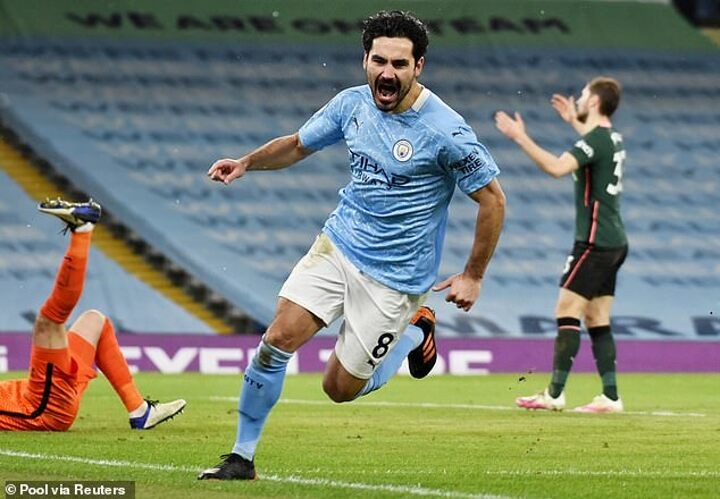 He may be a Manchester City mainstay after his reinvention as a goalscoring midfielder, but Ilkay Gundogan has revealed that Manchester United held talks with Borussia Dortmund a few years before he joined the blue side of the city.

The German joined Dortmund in 2011 from Nurnberg and won the Bundesliga in his first season under Jurgen Klopp, before again playing a key role as they made it all the way to the 2013 Champions League final before being defeated by Bayern Munich.

United's scouts had been frequent visitors to the Westfalenstadion to watch Gundogan's team-mate Shinji Kagawa, eventually snapping up the Japanese in the summer of 2012 for an initial £12million fee.

While watching Kagawa - now at Greek side PAOK - United became intrigued by the possibility of purchasing Gundogan. However, things quickly hit a dead end.

'There were talks. I think it was two or three years before I joined City when I was playing for Borussia Dortmund,' Gundogan confirmed to Sky Sports.

'It never really went into advanced talks because Borussia Dortmund made it quite clear that they were not willing to sell me and I also had a few years left on my contract, so there wasn't really a point to talk to anyone at that point. So yeah, it didn't happen.'

Despite the move not getting off the ground, Gundogan is probably not regretting biding his time before joining Pep Guardiola at City.

The 30-year-old has won two Premier Leagues, an FA Cup and three EFL Cups since arriving at the Etihad in 2016.

He has also added goals to his game in spectacular fashion this term, netting 10 goals in his last league games, including two-goal hauls West Brom, Liverpool and Tottenham as Guardiola's men have surged 10 points clear at the summit.