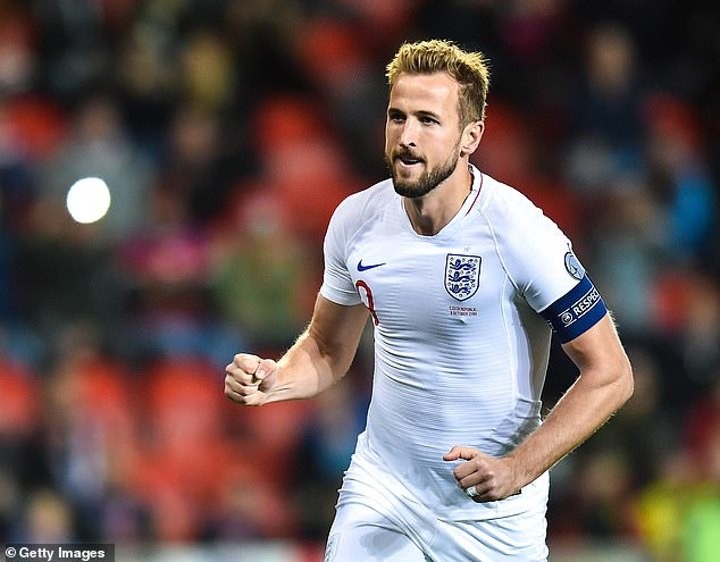 Harry Kane is at home, in self-isolation, with a series of Tottenham Hotspur shirts on the wall behind him and Sportsmail’s Jamie Redknapp on the screen in front.

During this lockdown, many of us have turned to technology in a bid to stay in touch with friends.

Kane and Redknapp are no different, and 50 minutes into this virtual interview, the Spurs striker takes us on a tour. He shows us his shirt from Tottenham’s final game at White Hart Lane, and the ball from his first Champions League hat-trick, against Apoel Nicosia in 2017.

‘I’ve got the boys there,’ he adds as he shows us his Premier League and World Cup Golden Boots. ‘I’m hoping to play for another 10 years at least, so hopefully a lot of trophies to win.’

There remains room for one more framed shirt - the one he will be wearing if and when he takes over from Wayne Rooney as England’s all-time top goalscorer.

The topic of that record is where we begin here, with this interview conducted live on Instagram.

Jamie Redknapp: With what’s going on, you’ve got a lot of time to think about your future, Harry. You’re on 32 goals for England, and Wayne Rooney is on 53. Have you got your eye on that total?

Harry Kane: Looking at it now, I’d be disappointed if I didn’t get to that amount. I’m a confident guy. If I carry on playing for England for the next five or ten years, then, for sure, that’s a record I want to be beating. I’m confident if I stay fit and healthy then I’ll be able to catch that one up.

JR: What’s been your favourite England moment to date?

HK: My debut, scoring after 79 seconds at Wembley. It’s what you dream of as a kid. I couldn’t have written it any better. We have a fantastic team and it’s down to us to show we can win trophies. I’m excited every time we meet up with England.

JR: So there are no cliques? We know that has existed in the past with the Manchester United and Liverpool lads. They’d sit on their own tables. That’s not what you want. You want harmony.

HK: It’s not a rule but whenever we meet up, we try to put club football to one side. We all know how competitive the season can get, and there’s rivalries between clubs. But it’s important when you come to England that your focus is on England. You can’t have peoples’ minds elsewhere.

A normal Sunday afternoon might see Kane on the pitch and Redknapp analysing his performance in the Sky Sports studio, but these are not normal circumstances. Everyone, Premier League players included, are having to adapt.

JR: You haven’t played since New Year’s Day after your hamstring tear. How’s the injury?

HK: So far, so good. Whenever we go back, whether it’s a few weeks, a month, two months, I should be ready to integrate with the group. There’s no rush, there’s no panic, I’m in a good place and space. I’ll just use this time to heal even more.

JR: We’ve been saying it for a while, but do you think Tottenham have to make the most of this team and lift a trophy sooner rather than later?

HK: It’s a hard thing to take. I want to win. It starts to build up. If we do end up finishing this season, we have to try to get back into the Champions League spots. Then next year, it’ll be the gaffer’s first chance to have a pre-season with the team.

JR: I know you and Mauricio Pochettino were close. What’s Jose Mourinho been like?

HK: Good! He’s keeping up to date, texting the players, and we’ve all been given individual programmes to work on. He’s come in and what you see is what you get. He’s an honest guy. He’ll tell you if you’re doing things well. He’ll tell you if not. It’s great to work under a manager like Jose.

I’m excited to see how that relationship unfolds and see what we can do on the pitch. So far he’s been great. He’s excited to put his stamp on the team when he gets that opportunity. He’s won everywhere, and I’m sure he’s not got any intentions to not do that at Spurs.

Ahead of this interview Redknapp asked his Instagram followers to submit questions for Kane.

JR: A lot of people want to know this, Harry, so let’s get it out of the way: could you see yourself staying at Spurs for the rest of your career?

HK: I couldn’t say yes or no. I love Spurs. But I’ve always said if I don’t feel we’re progressing as a team or going in the right direction, then I’m not someone who would stay for the sake of it.

HK: Premier League winner, for sure. I’ve had some great success individually, but I play this sport to win trophies as a team. Coming together and being champions, that would feel a lot better than breaking a record. Injuries and staying in the Premier League is a big factor for that (taking over Alan Shearer’s 260 goals).

'If I was to play Premier League football for the next ten years then I’d back myself to try to get that record. That’s something that’s in the back of my mind.

JR: One last thing, these have been truly difficult times for everyone but this week has given us all a reality check. NHS staff are the real stars out there.

HK: Absolutely. It puts it all in perspective, the amazing job they’ve been doing. We can only thank them. All we can do is give them the best possible chance of saving lives, and that means staying at home.