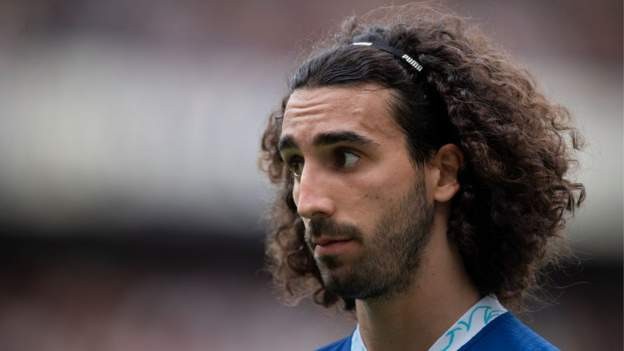 Chelsea's Marc Cucurella says he will never cut his long hair - even though it played a role in Tottenham's late equaliser at Stamford Bridge on Sunday.

The wing-back was pulled down by his hair by Spurs defender Cristian Romero in the latter stages of their Premier League meeting.

No action was taken after a VAR check, and Harry Kane headed in seconds later to earn a 2-2 draw.

But Cucurella said: "I'll never get my hair cut. This is my style."

He continued: "Before the game, I spoke with him [Romero] and maybe it's a fight on the pitch. I have no problem with him. It's just one action in the game but maybe it was important because it changed the final result."

Signed from Brighton in a deal worth more than £60m, Cucurella has been handed a six-year contract and says such a long deal will benefit him on the pitch.

The 24-year-old said: "Well I think maybe it's a long time, but maybe that will allow me to play my best football at the club.

"It's good because I'm not pressured, in my mind, it's not like it's a six-month deal or something; there's a chance to play for the team and enjoy my football.

"Of course, a contract is only paper, but I've come here to stay for many more years."

"I'm surprised and I was very happy, he said he saw me when I was playing in Barcelona academy," said Cucurella.

"This is a big responsibility for me, but I'm happy because [owner] Todd Boehly and the gaffer have shown a lot of interest and faith in me."