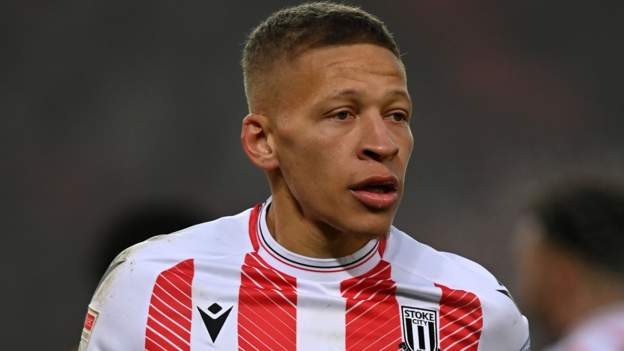 Striker Dwight Gayle admits the years are starting to catch up with him after finally opening his goal account for Stoke City.

Gayle, 33, was credited with the final goal in their 4-0 win over Reading when Josh Laurent's shot deflected off him.

"I understand that I'm not as young and leggy as I was, but I'm going to try and help the team whichever way I can. I'll have to use my experience."

The goal was Gayle's first since he scored for Newcastle in a 2-1 Premier League victory over West Brom in December 2020.

And he now has 122 league goals in a professional career which began late at the age of 23 with a move to Peterborough from non-league football.

On his latest strike, he said: "It's been a long time coming. I'm just happy to get under way.

"My old man [father] had said to me that I need a bit of luck, one to come off my back, and it did.

"Everyone was buzzing because they could see how much it meant to me. The fans were singing my name and it felt really nice."

Stoke are 18th in the Championship, seven points clear of the relegation places, but are now focusing on Sunday's FA Cup fourth round tie against in-form League Two side Stevenage.

It will be only the second meeting of the two teams, with the Potters winning a 2016 League Cup tie at Stevenage 4-0, thanks mainly to a Peter Crouch hat-trick.

"We know they are going to be difficult," added Gayle. "They obviously beat Aston Villa in the previous round.

"I have a couple of mates there and it should be an interesting game."