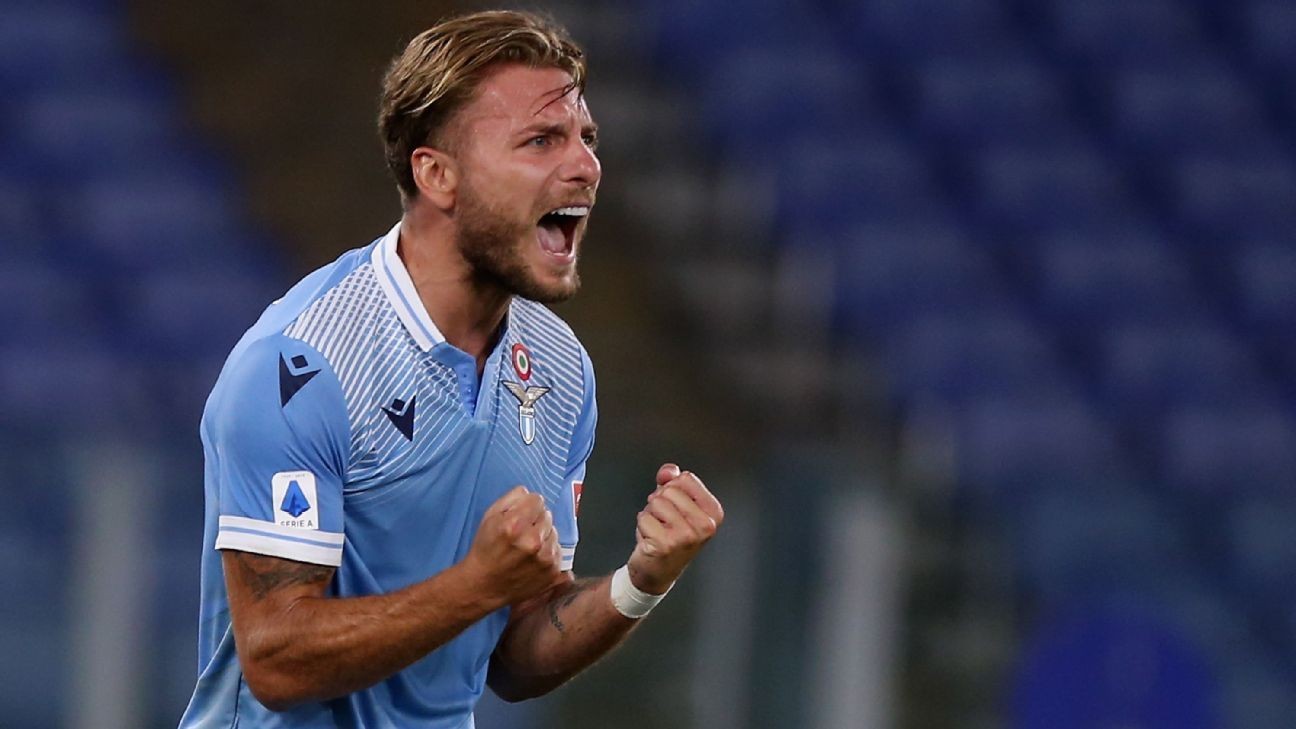 Lazio forward Ciro Immobile has won the 2019-20 European Golden Shoe as the continent's best marksman after he finished the campaign with a record-equalling 36 goals in Serie A.

Immobile's goal in Lazio's 2-1 defeat at Napoli brought him level with Gonzalo Higuain's tally for the Neapolitans in 2015-16, which was the all-time record for the division for a single season.

- Insider Notebook: Ole wants Sancho ASAP
- Stream Serie A games on ESPN+
- Immobile out to prove he belongs among elite

His 36 goals were enough to win him the European Golden Shoe with Bayern Munich's Robert Lewandowski finishing second in the table after his 34 Bundesliga goals.

Serie A's second top scorer Cristiano Ronaldo had gone into the final matchday four behind Immobile on 31 and was the only player with a realistic chance of catching the Italy international as domestic football in Germany finished in June. However, Ronaldo was left out of the Juventus squad to face Roma.

Immobile is the first Serie A player to win the award since Francesco Totti in 2007. Lionel Messi, last season's winner and the player to have won this award the most times with six, finished fifth with 25 goals.

Since 2009, only Luis Suarez with 31 goals for Liverpool in the 2013-14 season won this award while not playing in La Liga, but shared it with then Real Madrid forward Ronaldo.

Immobile also becomes the first winner other than Messi, Ronaldo or Suarez -- who won it again in 2015-16 with Barcelona -- since Atletico Madrid's Diego Forlan in 2008-09.

The award is judged on a points-based system where players from the top five leagues in Europe -- Premier League, La Liga, Serie A, Bundesliga and Ligue 1 -- have their goal tally multiplied by two, while leagues with lower coefficients are multiplied by 1.5 and then one lower down.

Borussia Dortmund forward Erling Haaland outscored Messi for the campaign as he finished on 29, but the two players were level in the standings as 16 of his goals were scored for Austrian side FC Salzburg.

Immobile finishes on 72 points, with the all-time record belonging to Messi who had 100 in the 2011-12 season, courtesy of his 50 La Liga goals for Barcelona.

Three Serie A players to finished in the top 10. As well as Immobile and third-place Ronaldo, Inter Milan's Romelu Lukaku was seventh on 23 -- level with the Premier League's leading marksman, Jamie Vardy.

Immobile was the outright top goal scorer in Europe but two other players, Wolfsberg's Shon Weissman and Young Boys' Jean-Pierre Nsame, scored 30 goals to finish in the top 10.

FC Flora Tallinn forward Erik Sorga scored 31 goals but, due to Estonia's low coefficients, his total was only multiplied by one and he finished in 39th place.

This is the third time Immobile finishes as Serie A's top goal scorer. In 2013-14, he scored 22 goals while at Torino and he hit 29 four seasons later which saw him finish level with then Inter forward Mauro Icardi.

Immobile becomes the eighth player to finishes as Serie A's leading marksman on three occasions, with only former AC Milan forward Gunnar Nordahl having achieved it more often with five from 1950 to 1955.