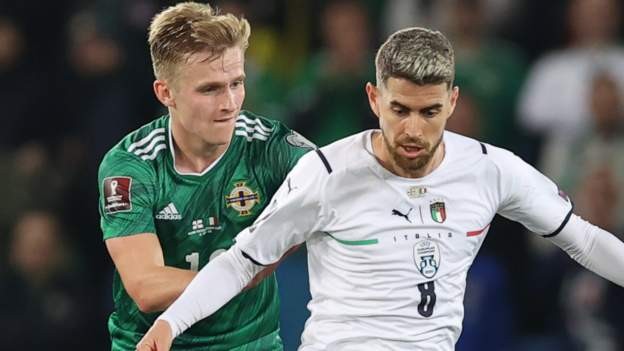 Substitute Conor Washington almost won it for the hosts in the last minute but his effort was cleared off the line.

Switzerland's win over Bulgaria means they top Group C and European champions Italy must face a play-off for a place in Qatar.

The draw secured a third-place finish in the table for Ian Baraclough's men.

Switzerland, who went into Monday night's final qualifying matches in second place, came through to win the group by hammering Bulgaria 4-0.

'We could have been talking about a historic victory' - Baraclough

An outstanding second-half performance from Northern Ireland in front of a raucous Windsor Park crowd almost delivered a win that would have been one of the biggest giantkilling acts in their history.

George Saville and Stuart Dallas had both gone close with good opportunities before Washington raced onto a long ball in the 90th minute and beat the outrushing Donnarumma to the ball.

The Charlton Athletic striker was clean through on goal but he failed to catch his left-foot shot cleanly and it allowed Italy captain Leonardo Bonucci to get back and clear off his line.

It had the entire home support on its feet and they were standing again when the full-time whistle sounded to cheer the players off the pitch.

Having said beforehand that he would not think about his international future until after the campaign, home captain Steven Davis savoured the Windsor atmosphere before exiting the pitch.

Roberto Mancini's Italians, who came into the match ahead of the Swiss on goal difference, must now prepare for a play-off in March, having missed out on the last World Cup by losing a play-off to Sweden.

Having stood firm against an onslaught of Italian possession in the first half, Northern Ireland showed a bravery in the second half that allowed them to carry a threat to Mancini's side.

They could - and probably should - have taken the lead in the 50th minute when a great move found Lewis in space on the left and his low cross was met by Saville, whose well-hit shot was superbly saved by Donnarumma.

Washington was lively after coming on for Gavin Whyte and it was an excellent break down the left by him that fed Lewis again. His cut-back sat invitingly for Stuart Dallas but, with Windsor on its feet again, the Leeds man dragged his low right-foot shot just wide of the far post.

Insigne and Federico Chiesa both came close for Italy before Washington had that late effort cleared off the line. The shock win was not to be but it did mean Northern Ireland answered the call of their manager and finished what has been a difficult and transitional campaign on a high.

The pattern of the match looked to be set in the opening minutes as Italy enjoyed lengthy periods of possession, with a lot of crisp one and two-touch passing while looking for the incisive final ball.

A diagonal ball from left to right seemed to be a regular ploy, with Jamal Lewis having to be alive at left-wing-back for the hosts as the visitors looked to get in behind him. Giovanni di Lorenzo did just that in the eighth minute but his shot on the half volley was superbly saved by Bailey Peacock-Farrell.

As dominant as the visitors were in possession, Northern Ireland's back five were well drilled and kept their shape well, marshalled superbly by the ever-composed Jonny Evans.

The Leicester City centre-half had to make a number of telling interceptions in a back five that looked content to sit deep and thwart the European champions.

A corner routine just before the half hour found Lorenzo Insigne on the edge of the box but his curler was comfortable for Peacock-Farrell, but the Sheffield Wednesday keeper had to make a more difficult save with his feet a few moments later when Federico Chiesa fired in a low effort.

Northern Ireland offered little as an attacking force in the opening 45 minutes, with front two Gavin Whyte and Josh Magennis having to drop deep and help with the defensive effort, but, with manager Baraclough continually barking instructions from the sideline, they deserved to be level at the break.

Josh Magennis (Northern Ireland) wins a free kick in the defensive half.

Stuart Dallas (Northern Ireland) wins a free kick in the defensive half.

Bryan Cristante (Italy) wins a free kick in the defensive half.

Attempt missed. Gianluca Scamacca (Italy) header from the centre of the box is high and wide to the left. Assisted by Federico Bernardeschi with a cross following a corner.

Bryan Cristante (Italy) wins a free kick in the defensive half.

Attempt missed. Domenico Berardi (Italy) right footed shot from the right side of the box misses to the left. Assisted by Giovanni Di Lorenzo.

Attempt missed. Stuart Dallas (Northern Ireland) right footed shot from the right side of the box misses to the left. Assisted by Jamal Lewis.