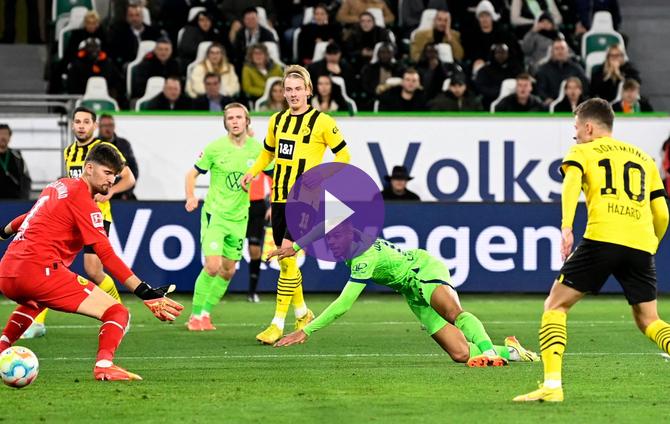 Dortmund missed the chance to move level on points, temporarily at least, with Bayern Munich at the top of the table, staying in fourth place.

Wolfsburg -- who are unbeaten in their last eight games dating back to October 1 -- dominated the opening exchanges, taking the lead in the sixth minute when Van de Ven, 21, headed in a corner unmarked at the far post.

Dortmund eventually found their feet towards the end of the first half, with defender Niklas Suele hitting the post just before the break.

Dortmund roared out of the blocks in the second period, with teenage striker Youssoufa Moukoko forcing a reflex save from Wolfsburg goalkeeper Koen Casteels.

Dortmund midfielder Jude Bellingham fell to the turf in the second half clutching his shoulder and required treatment, but was able to continue and finish the game.

With Dortmund pushing forward in injury time, Wolfsburg hit the visitors on the counter, with Nmecha scoring to seal his side's third straight win.

The goal was Nmecha's fourth of the campaign, with the former England youth international taking his final chance to impress Germany coach Hansi Flick ahead of Thursday's squad announcement.

The loss was the visitors' fourth defeat from seven away games this season, while for Wolfsburg it was their first win over Dortmund in their last 15 meetings.