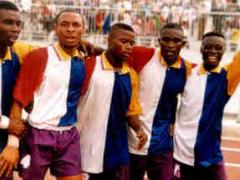 A golden generation of Hearts of Oak players burst onto the scene and luckily was under the distinguished tutelage of Jones Attoquayfio who moulded a winsome team famously known as 'The 64 Battalion'.

The first which was won in the 1996/97 season ended the Hearts' six-year wait for the league trophy and more importantly got them on the way to what will eventually be a total dominance of the local game.

The art of team work was vaguely demonstrated with this side and no one came dare came close, not even fellow heavyweights Asante Kotoko who during this period suffered their biggest defeat in the big Ghanaian derby - a 4-0 thrashing which still haunts them till now.

TheirÂ hard work, dedication and their unblemishedÂ commitmentÂ to the Phobian course was eventually rewarded with the club's first African title in a dramatic finale against Tunisian club Esperance in the year 2000.

It was at this point that their cult statuses were confirmed and every now and then Ghanaians are reminded of their great works though a famousÂ millenniumÂ song composed for the club after the Champions League triumph.