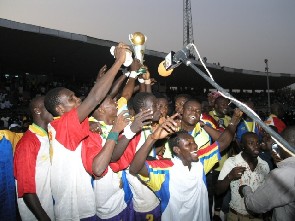 Hearts of Oak conjured their magic yet again on their rivals Asante Kotoko to win the inaugural Caf Confederations Cup in 2004.

Just before the eyes of their home fans, Kotoko players had to look on painfully as their opponents made their way to the podium to receive the trophy.

It however started brightly for the Porcupine Warriors. Hearts needed a last gasp Louis Agyemang goal to pull even after Michael Osei had put the visitors ahead in the first leg played in Accra.

It looked at that point that the trophy was going to remain in Kumasi with their team in a rich vein of form. Mind you, star midfielder Charles Taylor has crossed carpets to join the Reds.

And he duly stung his former club with a 53rd minute goal to set the Kumasi Sports Stadium (now Baba Yara Stadium) alight, they could sense a victory.

But it wasnâ€™t to be, a 8-7 penalty shootout win after Lawrence Adjah-Tetteh has pulled level again late on Â ensured the trophy headed to the capital before the eyes of a teary Kotoko crowd.

Coach Hans Dieter Schmidt who was blamed for the loss with the substitution of Charles Taylor and Nana Arhin Duah was later sacked but it did little to atone for the damage caused by the Phobia boys.