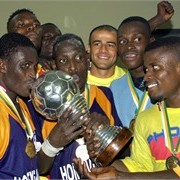 Hearts of Oak impressively remained unbeaten throughout the entire group phase of the 2000 Caf Champions league but it was during the finals that all the drama unfolded.

After securing a staggering 14-point to top Group B which includes Egyptian giants Al Ahly, then Nigeria and Senegal champions, Lobi Stars and Jeanne dâ€™Arc respectively, the Phobians were pitted against Tunisian giants Esperance who also topped Group A grand finale.

In the old Caf Champions League format, only the group winners progressed to play in a two-legged finals to be played on December 2 and 17 in Tunis and Accra respectively.

It was certainly going to be Heartsâ€™ year; mind you they had already won the Ghana league and FA Cup double and were awaiting the Champions League to complete an historic treble.

The team led by charismatic coach Jones Attuquayfio gladly accepted their â€˜under-dogâ€™ tag going into the first leg away to a packed 30,000 capacity El-Menzah Stadium in Tunis and truly, they were thoroughly dominated.

Esperanceâ€™s profligacy however caused them on the day as they failed to convert the numerous chances that came their way and began taking the attacking efficiency of their opponents who were in defensive mode for granted.

The fans watched on disillusioned as the visitors came close to scoring a third after in the game which ended 2-1, meaning their team still had a chance but had to come to terms with the fact that their impressive 41-year unbeaten run at home in African club competitions had come to an end.

Hearts however left Ghana to prepare and escape all distracting pre-match celebrations which might deceive them about the real strength of Esperance going into the second leg at home as the odd-some favourites.

The Phobians eventually won the game before a packed home ground by 3-1 but not until they were handed an early scare by the Tunisians through an 18thÂ minute strike by Hassen Gabsi.

Hearts of Oak had to wait late in the game to score through Emmanuel Osei-Kuffour and a brace by star striker Ishmael Addo to win the game but not until it had beenÂ interruptedÂ for 18 minutes after teargas was fired into a rioting crowd.

A subsequent protest by Esperance after Hearts had been crowned champions failed to yield any dividend and Hearts were confirmed African champions for the first time in the year 2000.