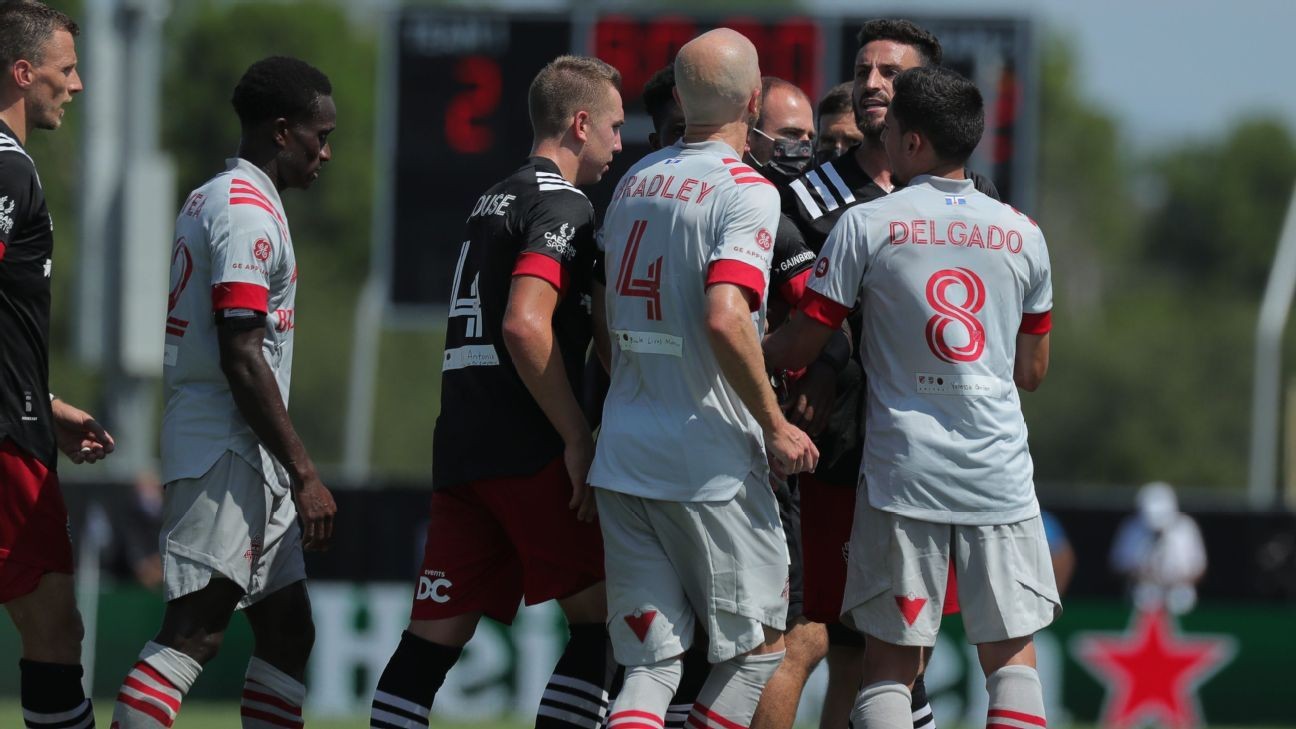 With reporting from Stefano Fusaro in Orlando, Florida.

Toronto FC captain Michael Bradley woke just before 6 a.m. on Sunday, ahead of a 9 a.m. kickoff against D.C. United, to find an email asking players to join a Zoom call with the league.

Toronto was informed that a player in its squad had an inconclusive COVID-19 test result -- Bradley said the group was told it was a positive -- and the Reds didn't make the short trip from the Walt Disney World Swan and Dolphin hotel to the ESPN Wide World of Sports Complex for the team's opening match in the MLS is Back Tournament. D.C. United, who was also informed that it had a positive test the night before the match, did make the trip to the field before the league postponed the match.

"It throws you through a loop, no doubt," Bradley said after the teams reconvened 24 hours later for the rescheduled match. "There's just so much that is still unknown about this virus, right? The uncertainty of it all means that when there is a positive test in your group, it rattles everyone a little bit; there's no two ways about it."

The game had already been postponed once -- from July 10 to 12 -- because Toronto did not arrive in Orlando until July 6, two days later than planned because of testing. It all mean that, when a TFC player received an inconclusive result on July 11 in a pregame coronavirus test, the match had to be postponed because the squad had not been in the bubble for the seven days stipulated by MLS.

That protocol is designed to protect against potential spread of the virus brought into the bubble from outside. D.C.'s positive test added further confusion, but they had been inside the bubble for eight days, meaning that one positive would not result in a postponement, as was the case when Sporting Kansas City confirmed a positive test on Friday and played against Minnesota United FC two days later.

- Stream MLS is Back on ESPN networks, App | FC Daily on ESPN+
- Schedule, TV info: What you need to know about MLS is Back
- MLS is Back group standings

All follow-up tests from Toronto and D.C. United came back negative on Sunday, although the two players with initial positive and inconclusive tests were not involved in Monday's makeup match.

The manner in which things unfolded did not go down too well with D.C., who clawed back a 2-2 draw after trailing by two goals and going down to 10 men. The final whistle brought F-bombs and accusations.

"We have the feeling that they didn't respect us," D.C. United's Frederic Brillant said. "We waited two times and they didn't show two times. Before we start the game there was tension between them and us, and in the end they were frustrated because we came back."

Perhaps the tension is understandable and we might see more of it as squads of athletes are cooped up on the floor of a hotel with limited mobility during a global pandemic. Positive or inconclusive tests only add to the anxiety and teams affected in the tournament's early days are Toronto, D.C., Sporting KC, Columbus Crew SC, Atlanta United FC and the New York Red Bulls, all of which returned negative results on subsequent testing.

"We're all getting used to certain things that you just would never have imagined were part of your everyday life or football routine," Bradley said. "On the days when you have testing, guys are anxious to get results and make sure that they are negative, so it is what it is."

Sporting manager Peter Vermes had stressed that his squad had been tested more than 1,500 times since returning to training last month, before confirming a positive case.

"The fact is that at first everyone is a little taken aback, surprised," Vermes said after SKC's 2-1 loss to Minnesota. "We'd been in that place before when we had a false positive, so we weren't sure which way it was going. When it got confirmed, that night we had training after we subsequently took tests again and came back negative outside of that one person. It definitely had a little bit of a shot to the guys, but the next day they were fine, they were right back at it."

Major League Soccer remains confident that there is no contagion inside the bubble and the league is using the same labs for testing that the NBA and NFL will use. MLS chief medical officer Dr. Margot Putukian has been on a weekly call with her counterparts in other North American leagues to discuss issues that have come to light so others can learn.

"We believe the tournament can be carried out safely," MLS deputy commissioner Mark Abbott said on a conference call Sunday after the D.C.-Toronto match was postponed. "In case it isn't, we'd make a decision."

Outside the bubble, the situation is worsening in Florida. Monday saw the state confirm 12,624 cases of COVID-19 -- its second-highest single-day number -- and that was one day after a single-day U.S. record of 15,300.

Aside from isolated moments, though, there is a sense of relief that the tournament is underway, with players happy to be back on the field after a four-month break. Some are catching up with old teammates and friends from other clubs -- albeit at a distance and with face masks on -- and there more can be seen walking about the complex.

"Imagine you are on a floor in the hotel with your teammates, of course you can relax," LA Galaxy striker Javier Hernandez said on Saturday. "I've been watching Netflix, I've been playing Call of Duty, FIFA a lot too, relaxing, speaking a lot on FaceTime with my son and [wife] Sarah. You can relax. Obviously you can't go out and have a normal life, but we all knew that before."

It's not for everyone, however. LAFC's English striker Bradley Wright-Phillips wasn't delighted about coming to Florida, calling the idea of the tournament "a little bit stupid," and hasn't changed his mind after playing the first game.

"It's what I thought it'd be like," Wright-Phillips said Monday night after the 3-3 draw with Houston Dynamo. "I thought it'd be boring, it is boring, but that's life, we're here. Days like today we get to play, we get to fight for three points and that's what we tried to do. I'm here now. I made my comments, it doesn't really matter. I'm here to try to help LAFC win games. It is what it is."

There have also been plenty of talking points on the pitch, The heat and humidity of Central Florida has been a topic of discussion from the beginning, especially in the 9 a.m. games when the heat index is typically already in the 90s.

"I knew we'd struggle physically," Chicago Fire manager Raphael Wicky said after his side's 2-1 win over the Seattle Sounders on Tuesday morning. "We saw the games, we saw a lot of teams cramping. For me it was always clear that the morning games are more difficult than the evening games, even though the evening games are tough as well, because in the morning you're in the full sunshine and you have 90 minutes with the sun shining down on you. It's very hot, it's brutal."

The quality of play may have wilted in the Floridian heat in the tournament's early days, but it's seen highlight-reel goals and incredible comebacks since the weekend. Lucas Zelarayan's goal for Columbus lit up social media, while Minnesota's stoppage-time comeback against 10-man Sporting was drama of the highest order and Houston's draw with pre-tournament favorite LAFC was full of end-to-end entertainment.

The hope is that game-related headlines outweigh any concerning COVID-19 between now and the final on Aug. 11.