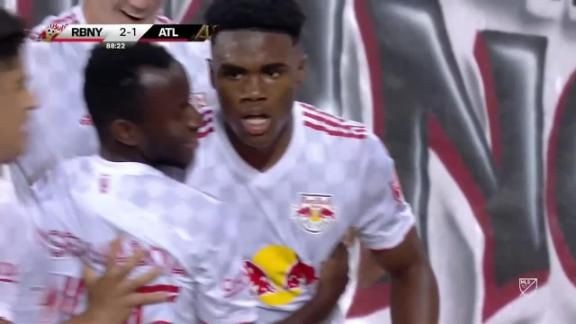 Sixteen-year-old Serge Ngoma became the youngest goal-scorer this MLS season, netting the winner in the 89th minute as the New York Red Bulls rallied late for a 2-1 victory over Atlanta United on Thursday night in Harrison, N.J.

Ngoma, playing in his fourth MLS game, entered the game in the 69th minute for Omir Fernandez and made a memorable defensive play to set up the decisive tally.

Ngoma intercepted a pass by Atlanta's Alan Franco, sped past defender Alex De John and put a right-footed shot from the center of the box into the bottom right corner of the net.

Before the New Jersey native scored the game-winner, Lewis Morgan produced the tying goal on a penalty kick in the 83rd minute.

Morgan converted for the third time from the penalty spot this season after Luquinhas by Atlanta defender Caleb Wiley's sliding tackle. Morgan easily scored his eighth goal by stepping into a left-footed shot that landed in the center of the net.

The late rally helped the Red Bulls (8-5-5, 29 points) get their third straight home win and move into a tie for first in the Eastern Conference with CF Montreal and the Philadelphia Union.

Josef Martinez scored off a scramble in the 75th minute after entering the game 12 minutes earlier.

New York goalie Carlos Coronel made two saves, including a diving stop on Ronaldo Cisneros in the 53rd minute.

Atlanta's only shot of the opening half occurred in the 31st minute when Coronel made a leaping save on Luiz Araujo's left-footed shot from the center of the box.