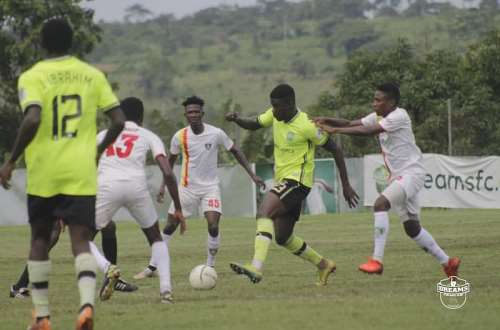 Eleven Wonders FC were held to a 1-1 stalemate at the Ohene Ameyaw Park in Techiman on Friday by Dreams FC in the Ghana Premier League.

Abdul Ganiu Abass' strike in the additional minutes cancelled out Samuel Boakye's lead for Dreams in the matchday seven encounter.

Yaw Acheampong made just one alteration to the squad that were beaten narrowly by newly-promoted Accra Lions FC last week in the capital.

Suspended Mohammed Amin Adams paved way for the inclusion of Abass Mohammed in the starting lineup for the home side.

Serbian trainer Vladislav Viric made four changes to the Dreams team that beat Gold Stars FC 2-1 at the Theatre of Dreams last weekend.

Maxwell Arthur and Philemon Baffour made way for Victor Oduro and Mohammed Abubakar in the starting lineup respectively.

Kwaku Karikari replaced Ali Huzaif in attack while Habib Mohammed earned his second start after picking man of the match award in his first last time.

The first half of the encounter went the way of the visitors who slightly dominated and created some decent scoring opportunities but failed to make any of them count.

On the stroke halftime, Dreams came too close to netting the opening goal after Kwaku Karikari had gone past his markers to set up Agyenim Boateng Mensah.

Abdul Ganiu Abass had only the goalkeeper to beat to put the hosts ahead in the 87th minute but his attempt was brilliantly saved by Augustine Koomson in posts for Dreams.

Samuel Boakye punished his former club with a beautiful volley just few seconds later to give Dreams the lead against the run of play.

Abass finally got his name on the scoresheet for the second time this season in the additional minutes to level matters for Wonders with a nice finish from close range.