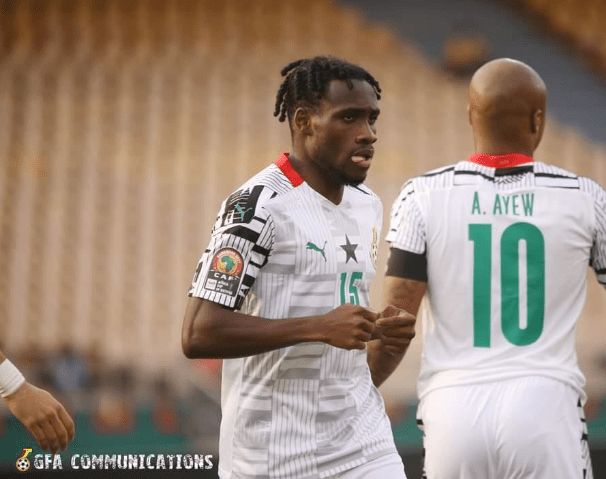 Ghana forward Joseph Paintsil has opened on that goal-bound incident in the game against Gabon involving captain Andre Ayew at the 2021 Africa Cup of Nations.

The 24-year-old was denied a clear-goal scoring opportunity by the Al Sadd forward against The Panthers in that second group game for the Black Stars.

Andre Ayew scored the opening goal of the game before  Jim Allevinah got the equalizer for Gabon with just two minutes to end the game.

Some Ghanaian football fans lambasted Andre Ayew for denying the young Ghanaian striker a chance to score in the game.

Paintsil in an interview with Accra-based station Happy FM said Andre Ayew apologized to him after watching a replay.

“I wont say I was disappointed. On the field you have to make a decision in a split second. I feel he didn’t see at the time but after the game he apologized to me”,

The former Tema Youth forward revealed making his debut at the 2021 AFCON with the Black Stars was very dear to him.

“It was my first time playing for the Black Stars at the 2021 AFCON. I was happy representing Mother Ghana at such a big tournament".

The former Ankaragucu forward stated Ghana could have qualified to the round of 16 of the 2021 AFCON if they played with 11 men.

If we were more than 10 players we would have conquered Comoros. We were just unlucky at that tournament”.