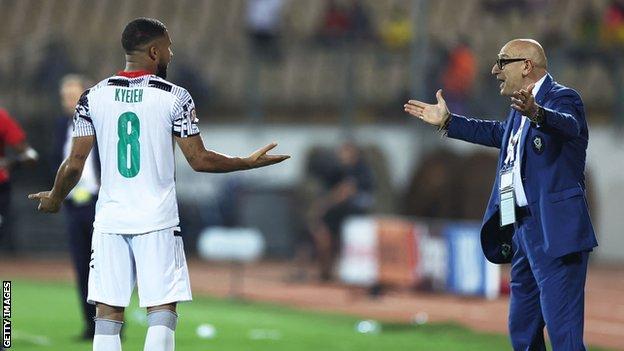 Gabon coach Patrick Neveu has praised his players for ignoring unwritten rules of fair play to grab a late, late equaliser against Ghana in an ill-tempered 1-1 clash last week.

Ghanaian players and officials went berserk after the Panthers ignored the fair play rules to score when the ball had been put out to attend to midfielder Daniel Kofi Kyere.

Ghana captain Andre Ayew had some harsh words for their opponents - labeling them a 'small team' after the controversial equaliser.

But coach Patrick Neveu says he has no problem with the goal.

"I think the equaliser was totally logical for this match and we don't need to kick up a huge fuss," Neveu said after the match.

"I am the national coach and so I have to take responsibility but football is a game with rules.

"The Ghanaian players were starting to slow down and their action could be construed negatively but there is a referee who is there to manage the game.

"Fifteen minutes earlier, they kicked the ball out of play and you all saw that the goalkeeper took a really long time to restart play and so he got a yellow card.

"I am sure you will agree with me that we could all see they were playing for time. My players played by the rules, it led to a goal and I can't really see where there is a problem."

He added that he felt that the Black Stars, four-time African champions, should take some of the blame for his players deciding to ignore fair play etiquette.

"There is a referee who applies the rules and (Ghana) were lacking in fair play until they scored and were constantly interrupting play," he stated.

"There is a referee there to blow the whistle if play needs to stop. The referee saw that the player was faking it, so you can't be making me responsible for not being fair-play - it's not possible.

"It's too easy. Ghana needs to take some responsibility."