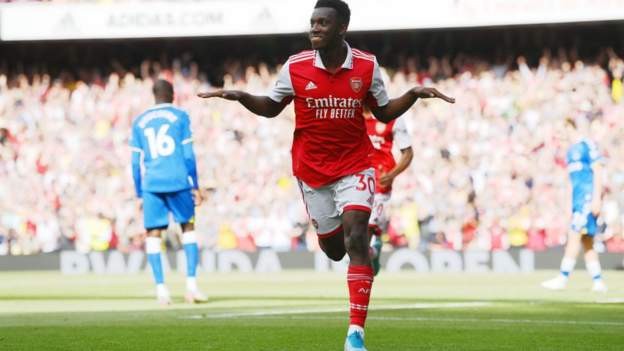 Arsenal missed out on Champions League qualification for a sixth successive season despite a comfortable victory over Everton on the final day.

The Gunners needed to beat Frank Lampard's side and hope Tottenham lost at already relegated Norwich, but with Spurs winning 5-0 at Carrow Road theirs was a forlorn task.

Mikel Arteta's side took the lead midway through the first half as Gabriel Martinelli stroked home a penalty after his shot struck Alex Iwobi's arm, with the spot-kick awarded after a video assistant referee check.

Eddie Nketiah nodded in following a corner to extend the hosts' lead on 31 minutes, before substitute Donny van de Beek, in what is likely to be his last game for Everton, side-footed in.

It proved to be a short reprieve as two second-half goals in three minutes ended the game as a contest. Both came from corners as Cedric Soares slotted home, then Gabriel poked in after Everton had initially cleared.

Martin Odegaard added a late fifth as Arsenal finished in fifth place, two points behind Tottenham. Though they missed out on the top four, their fans were at least able to celebrate a return to the Europa League after missing out this season.

The Gunners did all they could to try to finish in the top four for the first time since 2016, but the damage had been done in their two previous games - defeats at north London rivals Spurs and resurgent Newcastle.

The second of those losses prompted Granit Xhaka to question his team-mates' character, but they showed an appetite to make up for their performance at St James' Park by putting Everton under pressure from the start.

Everton looked like they had weathered the storm initially, but then former Gunner Iwobi gifted the hosts a penalty.

Martinelli's shot hit the Everton midfielder's arm, and although referee Andre Marriner missed it, once he had checked on the VAR monitor, he reversed his decision.

The goal was Martinelli's sixth of the season, and he had a hand in the second too, flicking on a corner, which Alli had failed to clear, and Nkeitah headed in.

The two-goal lead allowed the hosts to settle, though there were chances for Demarai Gray before Rob Holding allowed the ball to run across him for Van de Beek's first Everton goal since his loan move from Manchester United.

Two goals in three minutes put the match out of Everton's reach, though, and a second-half comeback akin to their heroics against Crystal Palace on Thursday never looked likely, especially when Odegaard grabbed the goal his performance deserved.

Despite the disappointment of missing out on the top four, the season can still be seen as progress for Arteta's young side.

Everton fans will be further relieved their team extended their 68-year stay in the Premier League on Thursday, as their wretched away form continued.

They have secured only one win away from Goodison Park since August, and a much-changed side showed glimpses of attacking threat before Arsenal wrestled back control.

Top scorer Richarlison missed out through injury, while Pickford was rested. Tom Davies also made his first start since November following a knee problem.

For much of the first half, Lampard's side had to retreat to a back five, and although Gray drew a save from Aaron Ramsdale and fired over, they could not deal with Arsenal's superior movement and energy.

But what will disappoint Lampard most was his side conceding three goals from corners, especially with Michael Keane, Mason Holgate and Jarrad Branthwaite making up the back three.

The visiting supporters were in good spirits until Arsenal took a three-goal lead, but having celebrated their top-flight survival on Thursday, their partying was probably done.

They still found the energy to celebrate, though, when they heard Manchester City had taken a 3-2 lead against Aston Villa, denying Liverpool the title.

Attempt missed. Isaac Price (Everton) right footed shot from the right side of the box misses to the right. Assisted by Dominic Calvert-Lewin.

Gabriel Magalhães (Arsenal) wins a free kick in the defensive half.

Demarai Gray (Everton) wins a free kick in the attacking half.

Attempt missed. Alexandre Lacazette (Arsenal) right footed shot from outside the box misses to the right. Assisted by Gabriel Martinelli.

Attempt missed. Dominic Calvert-Lewin (Everton) right footed shot from outside the box is too high. Assisted by Anthony Gordon.

Attempt missed. Alexandre Lacazette (Arsenal) right footed shot from the left side of the box misses to the right. Assisted by Martin Ødegaard.

Michael Keane (Everton) wins a free kick in the defensive half.

Attempt saved. Albert Sambi Lokonga (Arsenal) right footed shot from the left side of the box is saved in the bottom left corner. Assisted by Gabriel Martinelli.