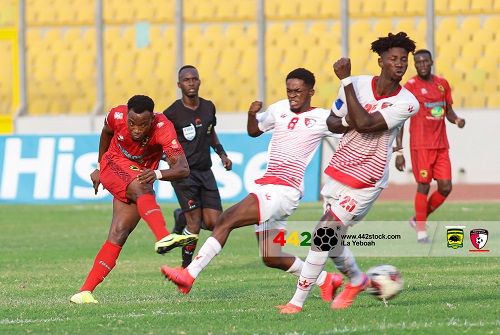 Dr. Ogum has named a 21-man travelling squad for the matchweek 27 fixture at the Sogakope Park with a lot of changes in the team.

The Porcupine Warriors are in a dire need of victory having lost the last two league matches - to Real Tamale United and to Legon Cities FC.

They can't afford to drop points anymore as Bechem United, Medeama SC, Aduana Stars and Hearts of Oak are poised to close in on them in the chase for the championship.

Kotoko are leading the pack with 52 points from 26 matches and closely followed Bechem who are on 45 points and Medeama with 42 points.

Kotoko will be be without their influential captain captain Abdul Ganiu Ismail after failing to fully recover from the injury he sustained several weeks ago.

Dr. Ogum will also miss the services of midfielder Richmond Nii Lamptey who is nursing a knee injury he picked up about a month ago.

Key duo Ibrahim Imoro and Richard Boadu are unavailable to face the Academy lads on Saturday due to accumulation of yellow cards.

However, Patrick Asmah who could have replaced Imoro at left-back position has been suspended by the club indefinitely and is automatically out of this game.

Midfielder Justice Blay remains out after he has been sidelined with an injury which rules him out of action for the remainder of the season.