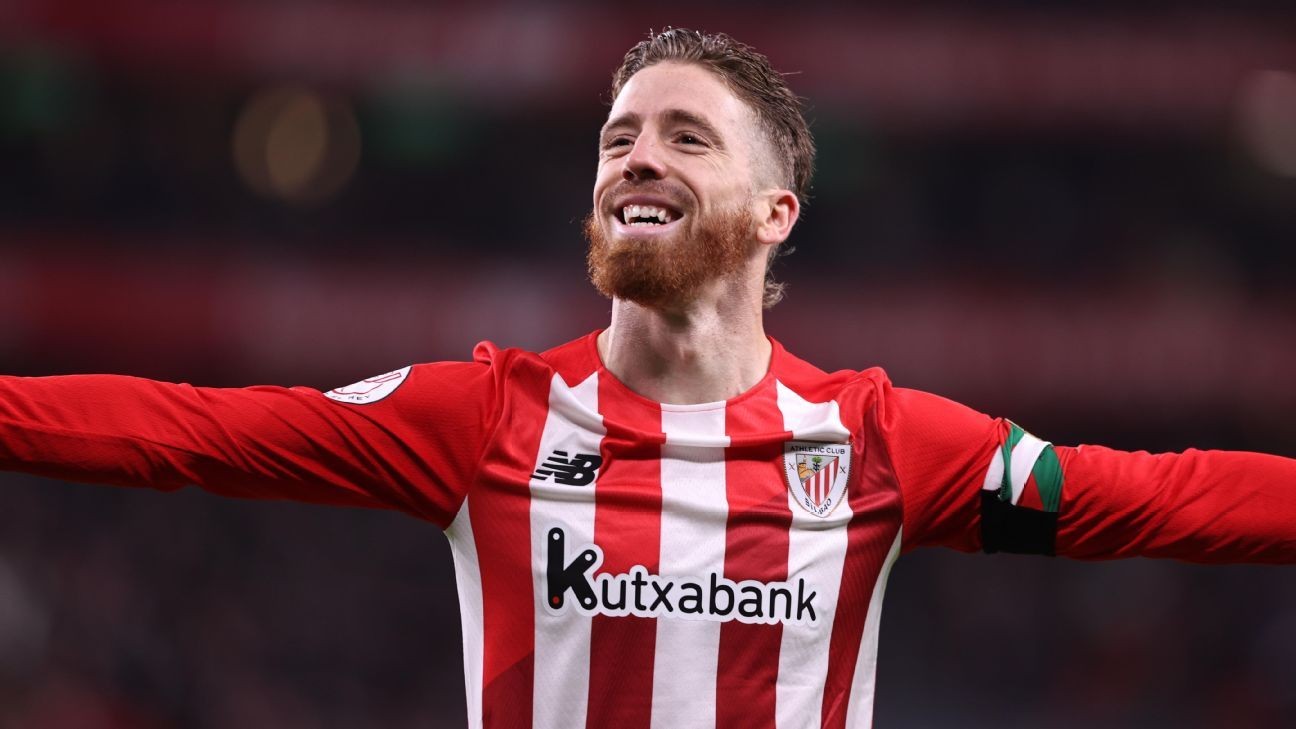 "San Mames is magic," Iker Muniain said, and the feeling was mutual.

It was late, everyone was exhausted, and it had been some night: as good as anyone could remember and too good to forget. The rain was coming down the way it's supposed to come down at San Mames, the place they call "the Cathedral," and after 120 minutes, bodies breaking, Athletic Bilbao had just beaten Barcelona 3-2 in the Copa del Rey. The kind of night when the first thing that Athletic coach Marcelino Garcia Toral thought to say when he appeared post-match was: "Thank you for letting me live it," a "magical" occasion that would stay with him "as long as I live."

Over the noise at the end, their captain was trying to make himself heard, which was almost as difficult as it was to stay standing. Had someone pushed over a wheelchair for him, it would have been welcome. When he finished, well after midnight, you almost expected him to crawl back down the tunnel. But the emotion was all the greater for it, so empty they were full, and it carried them.

"The satisfaction you experience is immense," Munian said. "San Mames is magic, magic. I'm lucky to play here, to have that feeling that runs over your whole body."

When the final whistle had blown, Muniain lay on the grass, arms out in a star. Almost the first touch of the game had been his. He had curled an absurdly perfect shot over Marc Andre ter-Stegen, spinning and curling and dipping from a difficult angle to open the scoring on 99 seconds. That moment felt a long time ago now and a lot had happened since, all the way up to the very last touch of the whole thing. That was Muniain's too, and there was something about it that just felt right. One thing is for sure: it wasn't just coincidence.

In a week, Athletic had played Atletico Madrid, Real Madrid and now Barcelona. They had beaten Atletico and Barcelona. In between those, they had been defeated by Real Madrid in the Spanish Supercopa final. At the end, they had stood and applauded their opponents in a gesture that saw many people applaud them back. A photograph taken from behind Muniain by Pablo Garcia, shows the captain standing with the runners-up shield under his arm and medal around his neck, watching. Ten months earlier, Garcia had taken a similar one: this time at the end of the cup final against Real Sociedad.

Athletic had played four finals in a year -- two Supercopas, two Copas del Rey -- but they had lost the last three. Muniain had not stopped crying after the Real Sociedad defeat, which had cut deep. He had also clung, like all of them, to their one success in the Supercopa last season: for Athletic, the Supercopa mattered, and getting to those finals at all was an achievement. That was something he, and they, had insisted after last Sunday's loss against Madrid -- and not unjustly, either. There is a reality that they face, one they accept willingly: Their "Basque-only" recruitment policy brings with it restrictions of which they are all aware.

Four days on, they were trying to go back and have another go, seeking to reach another final. Barcelona were beaten to set up another meeting with Madrid in the quarterfinals on Feb. 3 (3:30 p.m. ET, stream live on ESPN+). And Muniain knows what that means.

"I may have passed up the chance to win loads of titles, but I have always preferred to win one cup here than five Champions Leagues at another club," he has said. When he was a kid, Barcelona and Osasuna came to his house to sign him but Muniain wanted to join Athletic. When he last extended his contract, he removed the buyout clause, no escape needed or wanted. At the signing, he wore a t-shirt with a slogan on it, borrowed from Matt Le Tissier, who Athletic had celebrated, handing him the first of what is now a regular One Club Man award. The t-shirts were sold in the club shop, and the slogan ran: "To play for the best clubs is a nice challenge but there is a more difficult challenge: to play against them and beat them. I dedicate myself to this task."

On Thursday night, Athletic Club and Muniain did exactly that. He had helped carry them over the line.

Asked about Muniain's performance on Thursday night, Marcelino smiled. It would be unfair to single out an individual player when everyone had played so well, he said, and he was right. They had all been superb: Nico Williams, Inigo Martinez, Yuri Berchiche, Alex Berenguer, all of them. But he couldn't help it, either. Munian's display had been "marvellous," he said.

That's one word, and it's right, but it may not be enough. It is genuinely hard to recall an all-round individual match as good in a long time, from anyone.

Muniain scored the first goal. It was his free kick, superbly delivered, that led to the second. And he then scored the third. It was only a penalty, sure, but then: only?! Athletic had led until the last minute, caught by Pedri's late equaliser, and had gone into extra-time, the pressure intense and the cramp creeping up their legs. "Those are moments of tension. You have to choose well," he said of the penalty. Alongside him Gerard Pique was trying to put him off, having a word. "I couldn't hear him: it was very noisy," Muniain grinned after. Ter Stegen went one way, Muniain went the other and Athletic led again, the winner scored.

Nor was it just this performance. This season, Muniain if fifth in LaLiga when it comes to goal assists, which may not sound like much, but he's first in total assists -- in other words, clear chances created, even if they're not then taken. And by miles. His total of 60 is fifteen clear of anyone, Nabil Fekir the closest player to him. He s in the top 10 for completed dribbles.

Maybe the most remarkable stat is that he's still only 29. It feels like he has been around forever, which in a way, he has. He first joined the first team in preseason training at 14, and played his first game at 16 years, 7 months -- against Young Boys, which is pleasing. A week later, he scored. No one had ever got a European goal earlier. It's been nine years since he made his debut for Spain, in a friendly. But he only ever played once more, seven years later, and three years ago now.

There was always something special about him, although sometimes the projection of how good a player he will be rather than the reflection of how good he is becomes a problem, setting the bar too high and skewing judgements. There have been periods where he has not been the player some predicted. Injuries were certainly a problem, too: twice he torn knee ligaments, missing more than 60 games across two spells, the last of those in 2018. A look at the most basic stats of all and it speaks of a consistency only really interrupted by injury: 28, 31, 34, 14, 35, 20, 25, 35, 33, 33, 35 and 26 league games played each season since the debut season.

He has started more league games than anyone else at Athletic this season. A little unnoticed, perhaps, he has been superb. Once nicknamed Bart Simpson, the era of mischievous youth is no longer one he identifies with, and while his talent has always been there, he's now better than ever. Playing nominally on the left of the of four, he has freedom to come inside where Marcelino says he can be more involved -- and the more he is on the ball, the better. Only one Athletic player has completed more passes. He has more interventions than Luka Modric.

The manager has embraced him, a relationship developing with certain parallels to the one that was forged between Marcelino and Dani Parejo at Valencia. They talk often: on tactics and technique. Physically -- one of Marcelino's great obsessions -- he is better than before. Different, too. There's a maturity, a leadership, an awareness there now that was seen so clearly on Thursday night, which is why it wasn't really the headline moments that defined this performance. It wasn't the goals or the (pre-)assist. It was all of it.

"His reading of the game; tactically, he was very good; his decision-making; the technical ability ... brutal," Marcelino said. "And on top of it all, a huge presence, the constancy. Extremely complete."

And if there was a moment that helped illustrate it, it wasn't the goal or the assist or the penalty; maybe it was what happened at the very end, the assuming of risk and responsibility, seeking a way to keep them all safe. The way he carried them over the line, the OK, leave it to me. The moment in minute 117 when he went down into a corner where there was no way out and found a way out. When he went round in circles, leaving Frenkie de Jong behind and Nico Gonzalez on the floor. The moment when he did pretty much the same thing again on 120 minutes. And again on 121.

"In those moments when there is not long left and the legs are heavy, I tried to take the ball so that the team could breathe, time passed and the game died there with us having possession," he said, and so it was. When at last the final whistle went on a night that none of them would forget, one captain and coach would call magic, the ball was at Muniain's feet and so too was San Mames.