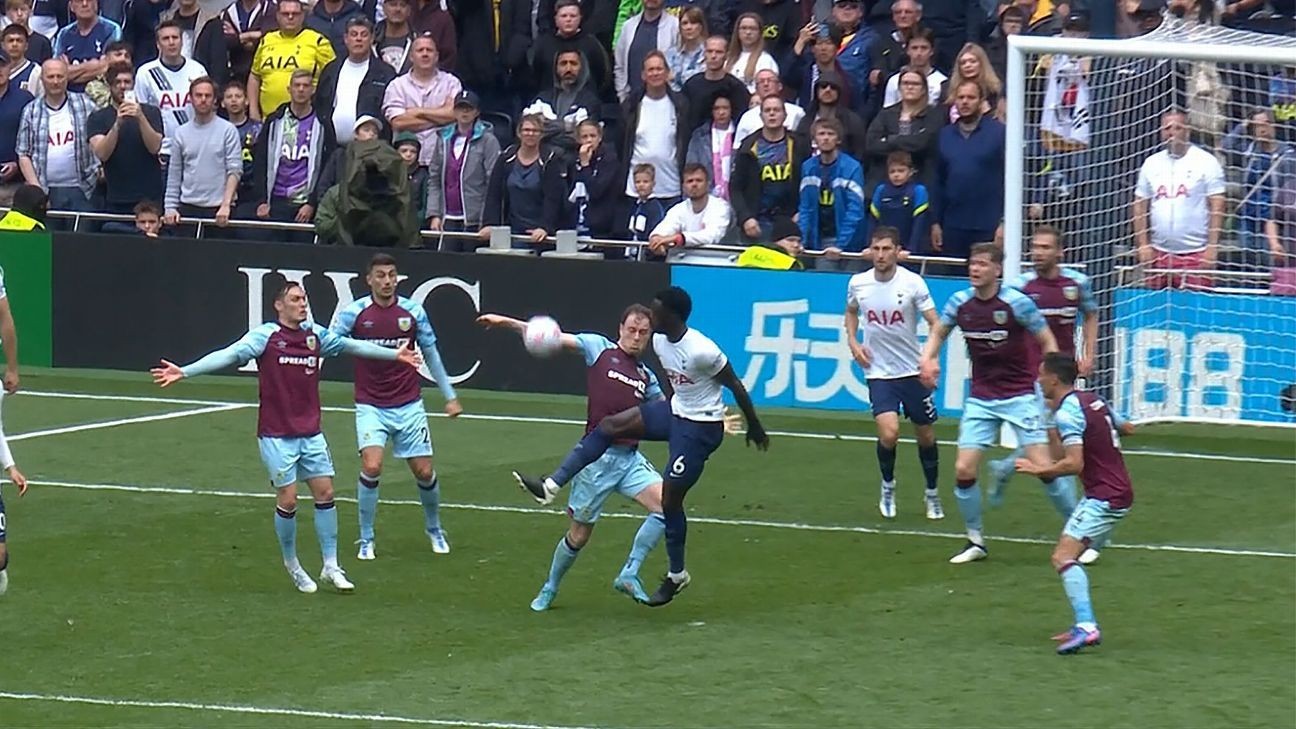 Video Assistant Referee (VAR) causes controversy every week in the Premier League, but how are decisions made and are they correct?

After each weekend, we take a look the most high-profile incidents and examine the process both in terms of VAR protocol and the Laws of the Game.

Burnley's Ashley Barnes had his arm in an unnatural position when it was hit by the ball. BBC

What happened: The score was goalless when Ashley Barnes and Davinson Sanchez challenged for a bouncing ball. Sanchez was the only player to appeal for a handball, and referee Kevin Friend allowed play to continue.

VAR decision: Handball against Barnes, with the penalty scored by Harry Kane.

VAR Review: This is what we can call a modern penalty, in two ways. First of all, until the handball law was re-written this kind of incident would be passed off as "ball to hand." Secondly, it's the kind of decision that we often only get in the VAR world; an incident which is barely noticed but picked up by the VAR and results in a penalty.

For all Burnley's protestations, this is 100% a penalty under the current interpretation of the handball Law. Barnes has his arm fully extended away from his body, creating a clear barrier. As soon as the VAR, in this case Stuart Attwell, picks up the incident there's only ever going to be one outcome.

Burnley may feel hard done by, but so would Tottenham if the VAR hadn't spotted it and the TV broadcasters later had.

What happened: Everton were 1-0 up when Kristoffer Ajer grabbed the shirt of Richarlison inside the area. Referee Michael Oliver allowed play to continue and directly from that Everton's Jarrad Branthwaite was sent off for bringing down Ivan Toney when he was through on goal.

VAR decision: The VAR, Darren England, advised the referee there was no clear and obvious error not to award a penalty. Also, it was decided there was no mistake in showing the red card to Branthwaite for denying an obvious goal-scoring opportunity (DOGSO).

VAR review: Taken in isolation, it's doubtful that the Richarlison incident would have been talked about quite so much. That it led directly to a red card for another Everton player brings it into sharper focus.

It's important to understand the VAR protocol, how and why decisions are made. When the incident happens, the VAR will begin a check immediately, and he will ask Oliver to describe what he has seen. Oliver told the VAR that he felt there was holding by both players (though obviously to a greater degree by Branthwaite), and for that reason there was no foul. If the VAR believes this description fits the replays, he will not advise the referee he has made a mistake.

Kristoffer Ajer was pulling on the shirt of Richarlison inside the area. BBC

The mere act of holding or pulling a shirt is not an offence; holding only occurs only when a player's contact with an opponent's body or equipment impedes movement.

The still images of the shirt pull are far more damning that the video evidence, as that suggests the holding was not prolonged or that it greatly impacted Richarlison. It means that if the referee has seen the holding it's highly unlikely the VAR will get involved to advise a penalty; and at the the same time if Oliver had given a penalty it wouldn't have been overturned.

In the Premier League with a high threshold for interventions, it was decided that the referee had not made a clear error -- but many will disagree and believe the VAR should have intervened.

If the VAR had advised there should be a penalty to Everton, then the red card to Branthwaite would have been cancelled. It means Everton could have been 2-0 up with 11 men, rather than 1-0 up with 10.

As for the red card to Branthwaite, the VAR checked that the dismissal was correct but it was never going to get overturned. Unfortunately for the 19-year-old, that he didn't mean to foul Ivan Toney doesn't matter where a red card for DOGSO is concerned. As with the red shown to Arsenal's David Luiz at Wolves last season, even incidental contact that denies a clear goal-scoring chance will result in a dismissal.

What happened: The score was 1-1 when Mads Bech Sorensen brought down Richardlison inside the area in first-half injury time. Oliver gave the penalty but took no sanction against the Brentford player.

VAR decision: The VAR checked for a possible DOGSO red card, but decided there was no case.

VAR review: Sorensen was extremely lucky here, as he was already on a yellow card following a foul on Anthony Gordon 10 minutes into the game.

On another day the referee could easily have shown the second yellow card, as the challenge was clumsy and high, the knee making contact with the Everton's striker's hip. Of course, not every foul leading to a penalty should be a yellow card, but Sorensen was fortunate.

The VAR can only check for a possible red card for DOGSO, and cannot initial a review for a second yellow card. That said, if the VAR had advised a red-card review, the referee at the monitor could actually reject that and decide it's not worthy of a red card and instead show a yellow. In Sorensen's case, that would have been the second caution and therefore a red anyway.

Steve Nicol reacts to Manchester City's epic comeback from two goals down to earn a draw vs. West Ham.

What happened: With the score at 0-0 in the 15th minute, Gabriel Jesus went down in the box when challenging for the ball with Kurt Zouma.

VAR review: There is some crossover with the Richarlison decision, in that had the referee, Anthony Taylor, given the penalty then the VAR, John Brooks, would not have advised him to reverse his decision.

But as well as being a case of clear and obvious, the other important consideration is the change in application explained by PGMOL boss Mike Riley at the start of the season. We were told that "contact on its own is only part of what the referee should look for," and the consequence of that contact is also important. Therefore, the question would be, did the contact from Zouma cause Jesus to go to ground?

We saw many penalties awarded for contact such as this last season, but the VAR has been consistent this season in not awarding penalties when players go down from minimal contact.

Naturally, fans will ask how accidental contact by Branthwaite on Richarlison can lead to a red card, yet this is not even judged as a foul. Largely, it comes down to the definition of DOGSO, and how intent isn't a consideration when a goal-scoring chance is denied. Of course, intent isn't relevant with Zouma on Jesus either, but it's the consequence of the contact that is important.

VAR overturn: Penalty conceded by Dawson for foul on Jesus

What happened: With the scores level at 2-2 in the 83rd minute, Jesus went down in the area under a challenge from Craig Dawson. The referee gave a goal-kick.

VAR decision: The VAR advised the referee should award a penalty, which Riyad Mahrez failed to convert.

VAR review: This was a simple VAR decision. While the referee didn't think Dawson had played the ball, he also didn't believe there had been a foul challenge on Jesus. However, replays clearly showed that Dawson had caught Jesus after the ball had gone and it was an obvious penalty.

After the penalty was saved by Lukasz Fabianski, there was then a question of encroachment by Aaron Cresswell before he cleared the rebound. The image clearly shows that Cresswell was outside the area when the ball was kicked, and timed his run perfectly. It was an exceptionally rare example of a penalty kick where not one player from either team is encroaching.

Aaron Cresswell was not inside the area before clearing the ball from Riyad Mahrez's saved penalty. BBC

Last season, this may have resulted in a retake, however, The Law was amended so that encroachment is judged solely on the feet, and any lean into the box with the upper body is no longer considered.

Information provided by the Premier League and PGMOL was used in this story.