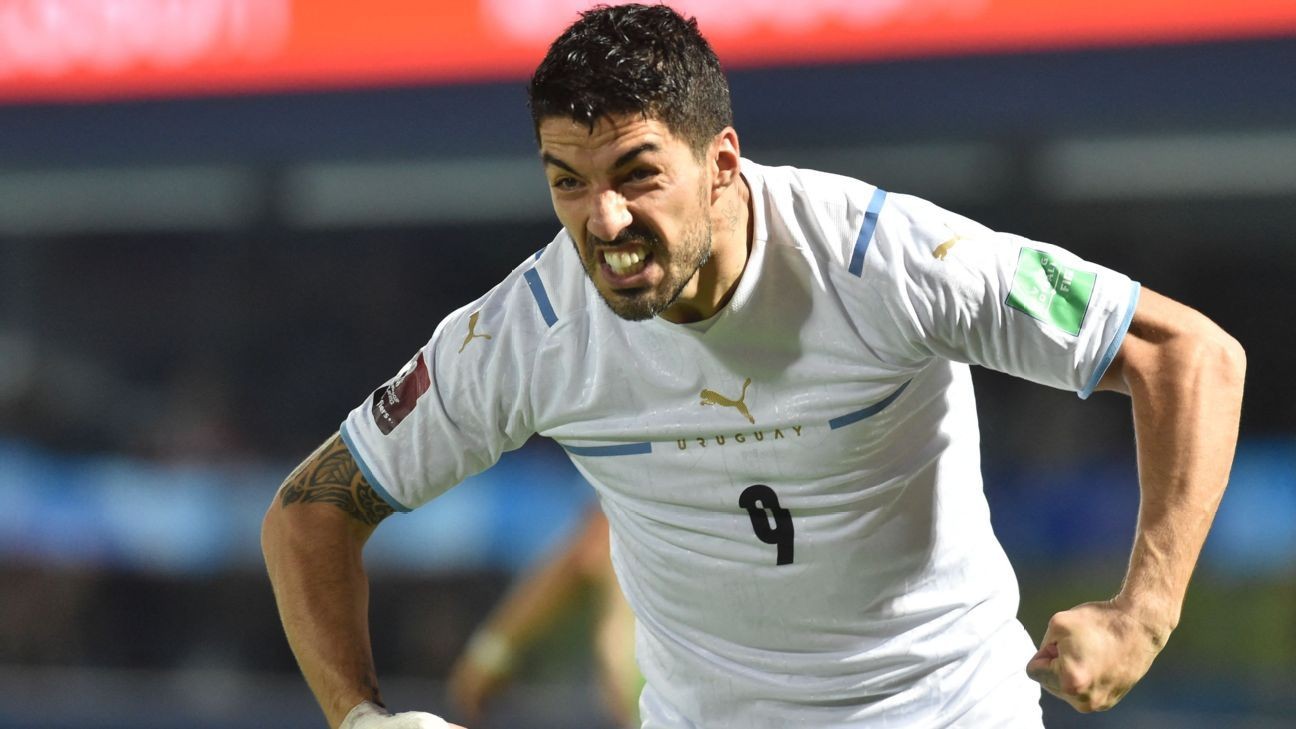 Argentina won 2-1 in Chile on a night of drama. Brazil drew 1-1 in Ecuador on an afternoon of barely credible drama. But Thursday belonged to Uruguay.

South America's big two have already guaranteed their places in Qatar. Uruguay, the other member of the traditional big three, took a huge stride towards booking their slot with a 1-0 win away to Paraguay. It means they end the night fourth in the table -- the last automatic qualifying position.They will be down in fifth -- the play-off place -- if there is a winner in Friday's meeting of Colombia and Peru.

But either way it is a big improvement on seventh, where they started the round. The result was a triumph for their debutant coach Diego Alonso, who had some big decisions to take in terms both of the personnel and the shape of the side.

Uruguay's 4-4-2 has been looking jaded. But he found a way to liven it up. Veteran captain Diego Godin has been creaking at centre-back. So Alonso moved him to the right side, where he would be protected by Ronald Araujo, playing a defensive right back role. And with Matias Vecino operating in front of him in defensive midfield, Godin had less space to cover.

Up front Alonso decided against the old firm of Luis Suarez and Edinson Cavani. Suarez started, with Cavani joining him for the last 20 minutes, replacing Darwin Nunez, whose mobility and capacity to pull out to the left allowed Suarez to concentrate on leading the attack. There were some new faces - Sergio Rochet in goal replacing the injured Fernando Muslera, Maxi Olivera at left back and Facundo Pellistri on the right of midfield.

But the line up was a declaration of faith in Godin and Suarez -- and it paid off. Both hit the woodwork after first half corners, and soon after the restart they combined for the only goal of the game. Upfield, Godin chipped into the space behind the Paraguayan right back, and Suarez did the rest with a precise left footed finish. Uruguay could have scored more as the game opened up and became stretched out in the heat of the summer night. But Paraguay never seriously threatened. Their hopes of qualification have now surely ended.

Meanwhile, with Venezuela at home on Tuesday, Uruguay's are rekindled. They had started the night level on points with Chile -- and now have a three point lead after Chile's experiment with a first ever competitive home game outside Santiago ended in failure.

The northern desert of Calama proved inhospitable to the hosts, who went down 2-1 to Argentina. Lionel Scaloni's side have now gone 28 games unbeaten -- and this time they did it without Scaloni. After testing positive for COVID, Argentina's coach stayed behind, and former defender Walter Samuel prowled the touchline. With Lionel Messi also absent, Argentina packed the midfield, stringing a line of five behind centre forward Lautaro Martinez.

They had moments of controlled possession, and carried a threat when they managed to play through Chile's midfield trio, who were missing the suspended Arturo Vidal. Both goals came when Argentina found too much space in front of the Chilean defensive line.

Angel Di Maria used it to curl home a special, and then Rodrigo De Paul advanced and fired a shot which Claudio Bravo -- injured and about to be replaced -- could only block for Martinez to drill home the rebound. But Argentina often found themselves without an 'out' ball, and as a result were placed under pressure. Chile rotated their attacking trio of Alexis Sanchez, Ben Brereton Diaz and Eduardo Vargas -- and found joy with Brereton attacking from the left, jumping against the much smaller Argentine right back Nahuel Molina.

Scores were briefly level when Brereton's header looped over keeper Emanuel Martinez -- the first time Argentina have conceded in six games. Near the end Martinez plunged low to his right to turn round another Brereton far post header, ensuring three points for his side and -- with daunting fixtures ahead -- making it hard for Chile to reach Qatar.

Brazil and Ecuador had themselves a testy match. Santiago Arcos-Pool/Getty Images

Brazil, of course, are already there, and Ecuador moved a point closer after a bizarre game in Quito. This match will surely feature as a quiz question; when was a keeper sent off twice, and still completed the 90 minutes? -- or in this case, 111, because so much time was added on for VAR delays.

The other keeper did take an early shower. Ecuador's Alexander Dominguez was sent off after 15 minutes for a dangerous foot first tackle on Matheus Cunha. It was not a game that Dominguez will want to recall. He flapped at an early corner, and from the resulting melee Phillipe Coutinho crossed, Matheus Cunha nodded down and Casemiro forced over the line. Goalkeeper is a problem position for Ecuador -- as is right back for Brazil. With Danilo injured, Emerson Royal was given a chance. He could have been sent off for throwing an elbow in the first minute -- and instead got his marching orders after 21 for a crude and reckless challenge.

On came the veteran Daniel Alves, and enjoyed himself. With both sides having sacrificed a midfielder there was space for him to cut in and construct from deep. He was behind some of Brazil's best football, though the man of the match was probably the always unheralded Fred, who made a number of vital interceptions inside his own penalty area as well as supplying Cunha with the pass that got Dominguez suspended.

Brazil's Alisson won his first reprieve when after consulting VAR the referee downgraded a red card to a yellow. Brazil;s keeper had come out of his area to clear with a high kick, and he had caught Enner Valencia with his follow through. Alisson was later preparing to deal with a Valencia penalty, awarded for a trip by Raphinha on Gonzalo Plata.

VAR took that one away as well. But right at the end it looked as if he would not be able to do anything about a stoppage time penalty, given when he punched the ball away from Ayrton Preciado. It was his second yellow card, and with no more substitutes allowed, an outfield player would have to go in goal. But VAR ruled that one out as well - in this case beyond all dispute.

So Alisson survived and so does Brazil's unbeaten record. Ecuador had threatened most in the air, and had drawn level after 74 minutes when a corner was headed past Alisson by centre back Felix Torres. Once everyone had recovered their breath -- from both the drama and the effects of the Quito altitude -- a draw was probably a fair result.

And for Ecuador it was an important one. Getting a point from this game was a key part of the plan. Brazil and Argentina have already crossed the line, and Ecuador are getting closer.