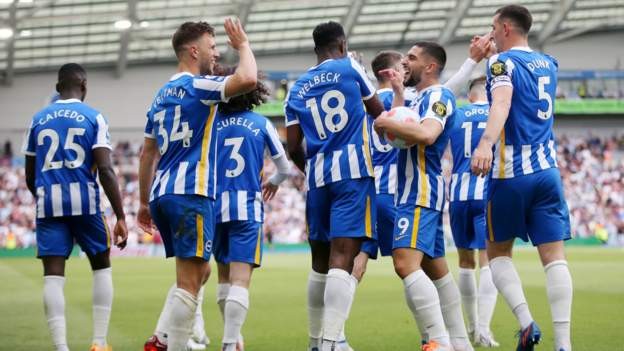 Joel Veltman scored only his second goal for Brighton

West Ham will have to settle for a place in the Europa Conference League after Brighton came from behind to win at Amex Stadium.

Michail Antonio's blistering strike lit up the game only for a rare goal from Joel Veltman to level matters.

The win sealed an impressive top-half finish for Brighton after a record-breaking season on the south coast.

With their record top-flight points tally already secured, Brighton finished the season in style with a victory against another top-eight side - after wins over Spurs, Arsenal and Manchester United in the final six weeks.

Their success has been built on outstanding away form - only Manchester City, Liverpool, Chelsea and Tottenham have picked up more points on the road - although two consecutive wins at home to end the season cannot mask a disappointing campaign at home.

They looked toothless in the first half but a half-time tactical tweak from their impressive manager Graham Potter breathed new life into the Seagulls.

In pairing Neal Maupay with Welbeck up front, he gave Brighton a twin threat that paid immediate dividends when Veltman popped up to squirm a shot under Fabianski straight after the break.

Gross put them in front with 10 minutes to go when he worked space on the edge of the box to fire home before Welbeck sealed a thoroughly satisfying afternoon in the final minute of stoppage time.

One game too many for the Hammers

For West Ham, the 56th game of their gruelling season was a step too far but at least they can look forward to another European adventure next year.

They matched Brighton for possession with Declan Rice typically dominant, but lacked the spark to break down the rugged back four installed by Potter.

Their one moment of real quality came from the boot of Antonio, although there was a whiff of controversy about it as he levered Lewis Dunk out of a challenge before ruthlessly smashing the ball past Robert Sanchez.

Antonio has had a rollercoaster season, a prolific first two months followed by barren runs - this was only his second Premier League goal since New Year's Day - and David Moyes will need to bring in some support for him in the summer if West Ham intend to succeed on all fronts.

He battled manfully throughout but, with top scorer Jarrod Bowen well shackled, West Ham attacks were focused down the right hand side where Vladimir Coufal was kept in check by Marc Cucurella.

After Gross' goal, Moyes sent on captain Mark Noble for his 414th - and final - Premier League appearance for the club he has served so well for 18 years.

He had little time to inspire a revival and his distinguished career ended with a defeat.

Marc Cucurella (Brighton and Hove Albion) wins a free kick in the defensive half.

Attempt blocked. Neal Maupay (Brighton and Hove Albion) right footed shot from the centre of the box is blocked. Assisted by Danny Welbeck.

Attempt saved. Declan Rice (West Ham United) right footed shot from outside the box is saved in the centre of the goal. Assisted by Mark Noble.

Attempt saved. Danny Welbeck (Brighton and Hove Albion) header from very close range is saved in the top centre of the goal. Assisted by Tariq Lamptey with a cross.

Attempt missed. Tariq Lamptey (Brighton and Hove Albion) right footed shot from outside the box is too high. Assisted by Alexis Mac Allister.

Attempt blocked. Aaron Cresswell (West Ham United) left footed shot from the left side of the box is blocked.

Neal Maupay (Brighton and Hove Albion) is shown the yellow card for a bad foul.

Attempt saved. Enock Mwepu (Brighton and Hove Albion) right footed shot from outside the box is saved in the bottom right corner. Assisted by Marc Cucurella.